The 2017 Chile wildfires are a series of wildfires that burned across Chile during January 2017.

On January 27–28, a wildfire described as the worst in Chile's modern history killed at least 11 people, including five firefighters and destroyed the town of Santa Olga in the central Maule Region, displacing thousands of people. [3] [4]

On January 20, the Chilean government declared a state of emergency in response to the wildfires. [5]

Chilean President Michelle Bachelet cancelled her planned visit to Punta Cana, Dominican Republic, for the fifth CELAC Summit on January 24–25 due to the wildfires. [6] 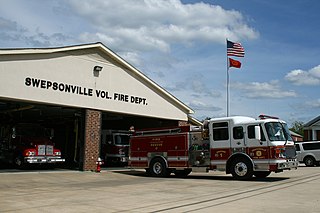 A volunteer fire department (VFD) is a fire department consisting of volunteers who perform fire suppression and other related emergency services for a local jurisdiction. Volunteer and retained firefighters are expected to be on call to respond to emergency calls for long periods of time, and are summoned to the fire station when their services are needed. They are also expected to attend other non-emergency duties as well. 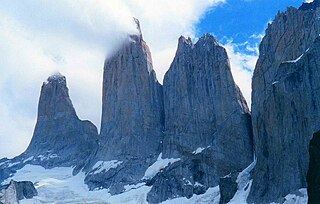 The Cordillera Paine is a mountain group in Torres del Paine National Park in Chilean Patagonia. It is located 280 km (170 mi) north of Punta Arenas, and about 1,960 km (1218 mi) south of the Chilean capital Santiago. It belongs to the Commune of Torres del Paine in Última Esperanza Province of Magallanes and Antártica Chilena Region. No accurate surveys have been published, and published elevations have been claimed to be seriously inflated, so most of the elevations given on this page are approximate. Paine means "blue" in the native Tehuelche (Aonikenk) language and is pronounced PIE-nay. 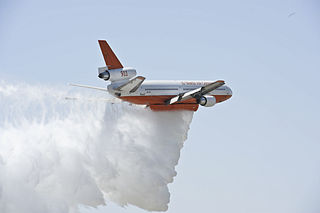 Aerial firefighting is the use of aircraft and other aerial resources to combat wildfires. The types of aircraft used include fixed-wing aircraft and helicopters. Smokejumpers and rappellers are also classified as aerial firefighters, delivered to the fire by parachute from a variety of fixed-wing aircraft, or rappelling from helicopters. Chemicals used to fight fires may include water, water enhancers such as foams and gels, and specially formulated fire retardants such as Phos-Chek.

Many countries and international organizations offered the United States relief aid in the wake of Hurricane Katrina.

As firefighting has a rich history throughout the world, traditions in this profession vary widely from country to country.

The 2007 Greek forest fires were a series of massive forest fires that broke out in several areas across Greece throughout the summer of 2007. The most destructive and lethal infernos broke out on 23 August, expanded rapidly and raged out of control until 27 August, until they were put out in early September. The fires mainly affected western and southern Peloponnese as well as southern Euboea. The death toll in August alone stood at 67 people. In total 84 people lost their lives because of the fires, including several fire fighters.

The 2007 California wildfire season saw at least 9,093 separate wildfires that charred 1,520,362 acres (6,152.69 km2) of land. Thirty of those wildfires were part of the Fall 2007 California firestorm, which burned approximately 972,147 acres of land from Santa Barbara County to the U.S.–Mexico border. At the peak of the wildfire activity in October 2007, the raging wildfires were visible from space.

The Summit Fire was a wildfire that started on May 22, 2008 in the Santa Cruz Mountains, near Corralitos, California, United States. The fire was fully contained on May 27, 2008. No injuries or fatalities occurred, with the exception of twelve firefighters who received minor sprains, cuts and strains. 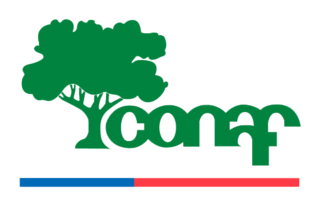 The National Forest Corporation or CONAF is a Chilean private, non-profit organization, through which the Chilean state contributes to the development and sustainable management of the country's forest resources. CONAF is overseen and funded by the Ministry of Agriculture of Chile.

On August 18, 1937, a lightning strike started the Blackwater Fire in Shoshone National Forest, approximately 35 miles (56 km) west of Cody, Wyoming, United States. Fifteen firefighters were killed by the forest fire when a dry weather front caused the winds to suddenly increase and change direction. The fire quickly spread into dense forest, creating spot fires that trapped some of the firefighters in a firestorm. Nine firefighters died during the fire and six more died shortly thereafter from severe burns and respiratory complications. Another 38 firefighters were injured. The fire killed more professional wildland firefighters in the U.S. than any other in the 103 years between the Great Fire of 1910 and the Yarnell Hill Fire in 2013.

The Great Fire of Valparaíso started on 12 April 2014 at 16:40 local time, in the hills of the city of Valparaíso, Chile. The wildfire destroyed at least 2,500 homes, leaving 11,000 people homeless. An additional 6,000 people were evacuated from the city, which was placed on red alert and declared a disaster zone. Fifteen people were confirmed killed and ten suffered serious injuries.

Air Spray (1967) Ltd. trading as Air Spray Ltd. of Edmonton, Alberta, Canada and Air Spray USA Inc of Chico, California is a private company specializing in aerial wildfire suppression using air tanker or water bomber aircraft. Air Spray was owned and operated by Canada's Aviation Hall of Fame inductee, Donald T. Hamilton until his passing in 2011. The company continues to be owned and operated by his daughter, Lynn Hamilton, of Foothills, Alberta.

The 2016 Portugal wildfires are a series of wildfires that burned across mainland Portugal and the Madeira archipelago in the north Atlantic Ocean during August 2016 that prompted the evacuation of more than one thousand people and destroyed at least 37 homes near Funchal on Madeira island. Flights were also disrupted at Cristiano Ronaldo International Airport due to high levels of smoke.

In November, a wave of fires began in Israel from south of the Beersheva area to Nahariya. Some of the fires occurred naturally; others were arson attacks. On 28 November, after 8 days, the firefighting services announced that the emergency condition was over. Firefighters fought 1,773 fires, at least 39 were reported as major fires that required at least ten crews or more. The largest fire occurred in Haifa, where 527 apartments were destroyed among 77 buildings, leaving 1,600 people homeless. 75,000 residents, about a quarter of the city's population, were evacuated from 11 neighborhoods. Other major fires occurred in Zikhron Ya'akov, Jerusalem area as well as smaller fires all across Israel and the West Bank. Israel's Nature and Parks Authority reported that more than 20,000 dunams of forests, brushland and open space were burnt, the largest amount since the Mount Carmel forest fire (2010).

Santa Olga was a town in the Talca Province in central Chile's Maule Region.

A series of wildfires in Greece, during the 2018 European heat wave, began in the coastal areas of Attica in July 2018. As of May 2019, 102 people were confirmed dead. The fires were the second-deadliest wildfire event in the 21st century, after the 2009 Black Saturday bushfires in Australia that killed 173.