General elections were held in Antigua and Barbuda on 18 January 2023 to elect members of the House of Representatives. The Labour Party (ABLP) has held an absolute majority of 15 seats in the House of Representatives after the 2018 general election, with Gaston Browne remaining as prime minister. Browne initiated a constitutional referendum after the 2018 election, which was rejected by voters, and following the death of Elizabeth II in 2022, he announced his intention to organise a referendum for the transition of Antigua and Barbuda to a republican system. Besides ABLP, the United Progressive Party (UPP), Democratic National Alliance, Barbuda People's Movement (BPM), and three independent politicians filed candidacies for the 2023 general election.

During the election campaign, UPP proposed to raise the minimum wage and expressed support for small businesses, while ABLP pledged to construct more homes and open two polyclinics. ABLP retained its majority in the House of Representatives, although it won a reduced 9 seats, while UPP won 6 seats. Trevor Walker, the leader of the BPM, retained his seat in Barbuda, while Asot Michael, an independent politician and former member of ABLP, won his seat in the St. Peter constituency. Browne was sworn in for his third consecutive term as prime minister a day after the election.

The previous general election was held 15 months early before the scheduled date due to the outgoing prime minister, Gaston Browne, wanting to obtain enough support for the implementation of several projects, such as land reform, in 2019. [1] [2] Browne retained his office, while his Labour Party (ABLP) increased its absolute majority in the House of Representatives. [3] The United Progressive Party (UPP) suffered defeat, with its leader, Harold Lovell, losing his seat. [4]

Since then, Browne attempted to modify the constitution to make the Caribbean Court of Justice the final court of appeal in the country in place of the Judicial Committee of the Privy Council. [5] This was however rejected in a referendum in November 2018. [6] Following the death of Elizabeth II in September 2022, Browne announced his intention to organise a referendum within three years regarding the transition to a republican system. [7] [8]

The 17 elected members of the House of Representatives were elected in single-member constituencies by first-past-the-post voting; 16 of the seats were allocated for the island of Antigua and one for the island of Barbuda. [9] In December 2022, Browne announced that the election would be held on 18 January 2023. [10]

See also: List of political parties in Antigua and Barbuda

The table below lists political parties represented in the House of Representatives after the 2018 general election. [11]

UPP presented its election manifesto on 9 January 2023. [14] Lovell proposed a EC$10 per hour minimum wage and a 10% wage and salary increase for public servants, as well as support for a stable water supply and small businesses. [14] ABLP announced its manifesto on 10 January, proposing to construct more than 1,000 new homes, rebuild the sea landing in Barbuda and open two polyclinics. [15] Both parties also expressed support "for a greener Barbuda". [16] Lovell also declined to debate with Browne. [17] The ABLP branch office for the St. John's City East constituency was set on fire on 16 January. [18]

Carty Anderson, an independent politician formerly associated with UPP, filed his candidacy due to "continued neglect" of the citizens of the St. John's Rural West constituency. [19] Another independent, Gail Pero-Weston, campaigned on "creating a better political landscape rather than representing a single constituency". [20]

Voting stations were opened from 06:00 to 18:00, and there were 60,916 citizens in total that had the right to vote in the general election. [30] [31] On 5 January 2023, it was announced that the Commonwealth Observer Group, headed by the former president of Seychelles, Danny Faure, would observe the election. [32] CARICOM, as well as the Organization of American States, also announced that it would observe over the election. [33] [34] The Caribbean Development Research Services reported lower turnout in comparison with the previous general election. [35]

The Electoral Commission reported that ABLP won 9 seats in the election, while the UPP won 6 seats in total. [36] [37] In Barbuda, BPM retained its seat while DNA did not win any, although Asot Michael, an independent politician, won his seat in the St. Peter constituency. [36] Lovell of UPP also failed to win his seat. [38]

Local news outlets reported that ABLP won 9 seats and that it retained its majority in the House of Representatives. [40] [41] Browne addressed his supporters shortly after the election and was congratulated by Bruno Rodríguez Parrilla, the minister of foreign affairs of Cuba. [42] [43] Joanne Massiah, the leader of the DNA, conceded the election, while Lovell resigned as the leader of UPP. [44] [45] [46] Browne was inaugurated into his third consecutive term in office on 19 January 2023. [40] [47]

Antigua and Barbuda is a sovereign country in the West Indies. It lies at the juncture of the Caribbean Sea and the Atlantic Ocean in the Leeward Islands part of the Lesser Antilles, at 17°N latitude. The country consists of two major islands, Antigua and Barbuda, approximately 40 km (20 mi) apart, and several smaller islands, including Great Bird, Green, Guiana, Long, Maiden, Prickly Pear, York, and Redonda. The permanent population is approximately 97,120, 97% residing in Antigua. St. John's, Antigua, is the country's capital, major city, and largest port. Codrington is Barbuda's largest town. 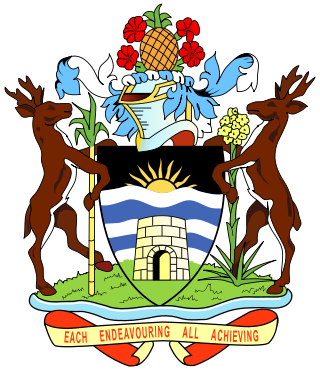 The politics of Antigua and Barbuda takes place in a framework of a unitary parliamentary representative democratic monarchy, wherein the sovereign of Antigua and Barbuda is the head of state, appointing a governor-general to act as vice-regal representative in the nation. A prime minister is appointed by the governor-general as the head of government, and of a multi-party system; the prime minister advises the governor-general on the appointment of a Council of Ministers. Executive power is exercised by the government. Legislative power is vested in both the government and the two chambers of the Parliament. The bicameral Parliament consists of the Senate and the House of Representatives. 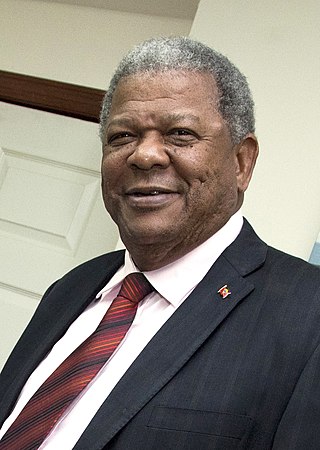 Winston Baldwin Spencer is an Antiguan politician who was the third Prime Minister of Antigua and Barbuda from 2004 to 2014.

Elections in Antigua and Barbuda take place in the framework of a parliamentary democracy. 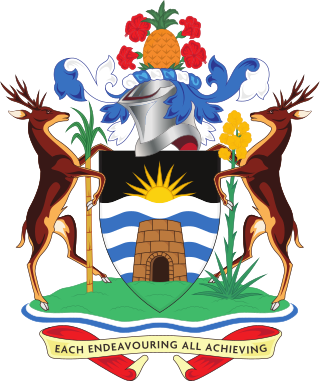 The House of Representatives of Antigua and Barbuda is the lower chamber of the country's bicameral parliament.

Sir Molwyn Joseph, KGCN, is an Antiguan politician and Chairman of the Antigua Labour Party (ALP). First entering politics in 1984 when he was made a Minister without Portfolio in the government of Vere Bird, Joseph became Minister of Finance seven years later, renegotiating the Antiguan national debt and introducing fiscal reforms. After a 1996 scandal in which it was discovered he had used his position to import a 1930s Rolls-Royce for a friend, bypassing normal import duties and taxes, he was dismissed from the Bird administration, returning 14 months later to serve as Minister for Planning, Implementation and the Environment. Following the 1999 general election he became Minister of Heath and Social Improvement before being made Minister of Tourism and the Environment a few months later. As Minister, Joseph attempted to improve the perception of Antigua as a tourist destination and invest in the industry, spending 2 million US dollars increasing the number of hotel rooms on the island and providing money for both Air Jamaica and Air Luxor to provide flights to the island.

General elections were held in Antigua and Barbuda on 12 June 2014. The result was a victory for the opposition Antigua Labour Party led by Gaston Browne, which won 14 of the 17 seats. Following the election, Browne became the country's youngest Prime Minister.

Gaston Alfonso Browne is an Antiguan politician serving as the prime minister of Antigua and Barbuda and leader of the Labour Party since 2014. Before entering politics, he was a banker and businessman.

Maria Vanessa Bird-Browne is a politician in Antigua and Barbuda. She was elected as a member of the House of Representatives for St. John's Rural East in the Parliament of Antigua and Barbuda in 2018, becoming the youngest lawmaker in the country and the youngest female member of parliament across the Commonwealth. She is the country's minister for housing, lands, and urban renewal. 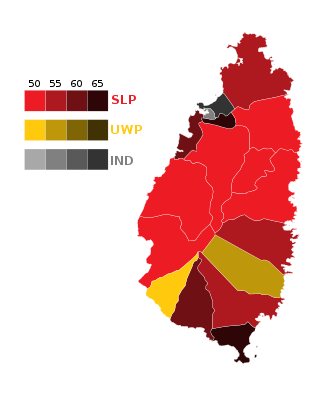 General elections were held in Saint Lucia on 26 July 2021, having been constitutionally required by 12 October 2021. Voters elected all 17 members of the House of Assembly. The result was a victory for the opposition Saint Lucia Labour Party, which won 13 of the 17 seats in the House, while the ruling United Workers Party lost nine of its eleven seats. It was the fourth consecutive election in which the incumbent government was defeated.

Trevor Myke Walker is a Barbudan politician and former Cabinet Minister under the Baldwin Spencer administration.

Osbert Richard Frederick is an Antiguan and Barbudan politician. He was appointed senator by Prime Minister Gaston Browne. After his appointment, he was elected the Deputy senate president in the Upper House of Parliament in Antigua and Barbuda.

Gail Christian is an Antiguan and Barbudan politician and senator. She is a senator of the Upper House of Parliament in Antigua and Barbuda. She was appointed senator by Prime Minister Gaston Browne.