A-DNA is fairly similar to B-DNA given that it is a right-handed double helix with major and minor grooves. However, as shown in the comparison table below, there is a slight increase in the number of base pairs (bp) per turn (resulting in a smaller twist angle), and smaller rise per base pair (making A-DNA 20-25% shorter than B-DNA). The major groove of A-DNA is deep and narrow, while the minor groove is wide and shallow. A-DNA is broader and apparently more compressed along its axis than B-DNA. [2]

Comparison geometries of the most common DNA forms

Dehydration of DNA drives it into the A form, and this apparently protects DNA under conditions such as the extreme desiccation of bacteria. [3] Protein binding can also strip solvent off of DNA and convert it to the A form, as revealed by the structure of several hyperthermophilic archaeal viruses, including rod-shaped rudiviruses SIRV2 [4] and SSRV1, [5] enveloped filamentous lipothrixviruses AFV1, [6] SFV1 [7] and SIFV, [5] tristromavirus PFV2 [8] as well as icosahedral portoglobovirus SPV1. [9] A-form DNA is believed to be one of the adaptations of hyperthermophilic archaeal viruses to harsh environmental conditions in which these viruses thrive.

It has been proposed that the motors that package double-stranded DNA in bacteriophages exploit the fact that A-DNA is shorter than B-DNA, and that conformational changes in the DNA itself are the source of the large forces generated by these motors. [10] Experimental evidence for A-DNA as an intermediate in viral biomotor packing comes from double dye Förster resonance energy transfer measurements showing that B-DNA is shortened by 24% in a stalled ("crunched") A-form intermediate. [11] [12] In this model, ATP hydrolysis is used to drive protein conformational changes that alternatively dehydrate and rehydrate the DNA, and the DNA shortening/lengthening cycle is coupled to a protein-DNA grip/release cycle to generate the forward motion that moves DNA into the capsid. 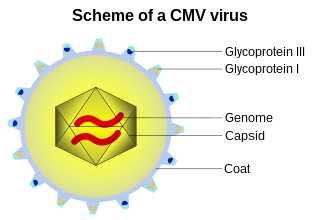 A capsid is the protein shell of a virus, enclosing its genetic material. It consists of several oligomeric (repeating) structural subunits made of protein called protomers. The observable 3-dimensional morphological subunits, which may or may not correspond to individual proteins, are called capsomeres. The proteins making up the capsid are called capsid proteins or viral coat proteins (VCP). The capsid and inner genome is called the nucleocapsid. 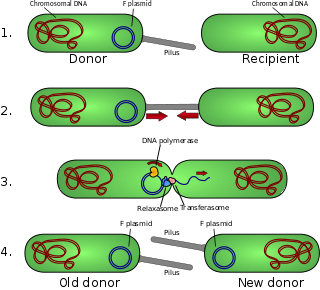 A pilus is a hair-like appendage found on the surface of many bacteria and archaea. The terms pilus and fimbria can be used interchangeably, although some researchers reserve the term pilus for the appendage required for bacterial conjugation. All pili in the latter sense are primarily composed of pilin proteins, which are oligomeric.

A provirus is a virus genome that is integrated into the DNA of a host cell. In the case of bacterial viruses (bacteriophages), proviruses are often referred to as prophages. However, it is important to note that proviruses are distinctly different from prophages and these terms should not be used interchangeably. Unlike prophages, proviruses do not excise themselves from the host genome when the host cell is stressed.

DNA primase is an enzyme involved in the replication of DNA and is a type of RNA polymerase. Primase catalyzes the synthesis of a short RNA segment called a primer complementary to a ssDNA template. After this elongation, the RNA piece is removed by a 5' to 3' exonuclease and refilled with DNA. 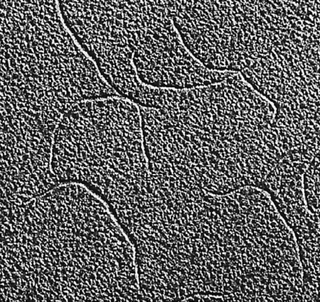 Filamentous bacteriophage is a family of viruses (Inoviridae) that infect bacteria. The phages are named for their filamentous shape, a worm-like chain, about 6 nm in diameter and about 1000-2000 nm long. The coat of the virion comprises five types of viral protein, which are located during phage assembly in the inner membrane of the host bacteria, and are added to the nascent virion as it extrudes through the membrane. The simplicity of this family makes it an attractive model system to study fundamental aspects of molecular biology, and it has also proven useful as a tool in immunology and nanotechnology. 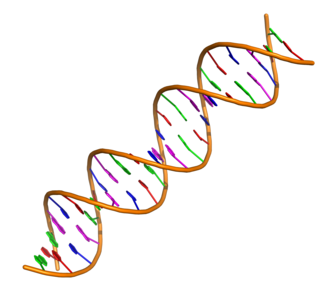 Rudivirus is a genus of viruses in the order Ligamenvirales; it is the only genus in the family Rudiviridae. These viruses are non-enveloped, stiff-rod-shaped viruses with linear dsDNA genomes, that infect hyperthermophilic archaea of the kingdom Crenarchaeota. There are currently three species in this genus including the type species Sulfolobus islandicus rod-shaped virus 2. The family name derives from the Latin rudis, thin rod, referring to the virion shape.

Lipothrixviridae is a family of viruses in the order Ligamenvirales. Thermophilic archaea in the kingdom Crenarchaeota serve as natural hosts. There are currently eleven species in this family, divided among 4 genera. 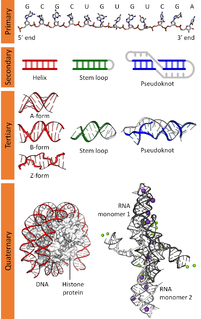 Bicaudaviridae is a family of hyperthermophilic archaeal viruses. Members of the genus Acidianus serve as natural hosts. There is currently only one genus (Bicaudavirus) and one species in this family: the type species Acidianus two-tailed virus. However, Sulfolobus tengchongensis spindle-shaped viruses 1 and 2 are regarded to belong to this family also.

Clavaviridae is a family of double-stranded viruses that infect archaea. This family was first described by the team led by D. Prangishvili in 2010. There is one genus in this family (Clavavirus). Within this genus, a single species has been described to date: Aeropyrum pernix bacilliform virus 1 (APBV1).

Ligamenvirales is an order of linear viruses that infect archaea of the kingdom Crenarchaeota and have double-stranded DNA genomes. The order was proposed by David Prangishvili and Mart Krupovic in 2012 and subsequently created by the International Committee on Taxonomy of Viruses (ICTV).

David Prangishvili is a virologist, Professor at the Pasteur Institute of Paris, and foremost authority on viruses infecting Archaea.

Betasphaerolipovirus is a genus of double stranded DNA viruses that infect haloarchaea. Natrinema virus SNJ1 is the type species and currently the only member of the genus.

Alphatristromavirus is the sole genus of viruses in the family Tristromaviridae. The thermophilic archaea of the genera Thermoproteus and Pyrobaculum serve as natural hosts. There are currently only two species in this genus: Thermoproteus tenax virus 1 and the type species Pyrobaculum filamentous virus 1 The genus was formerly classified into family Lipothrixviridae of order Ligamenvirales. However, due to lack of sequence similarity of TTV1 and PFV1 to other members of the Lipothrixviridae, genus Alphalipothrixvirus was renamed to Alphatristromavirus and moved into a separate family, the Tristromaviridae.

Spiraviridae is a family of viruses that replicate in hyperthermophilic archaea of the genus Aeropyrum, specifically Aeropyrum pernix. The family contains one genus, Alphaspiravirus, which contains one species, Aeropyrum coil-shaped virus. The virions of Aeropyrum coil-shaped virus (ACV) are non-enveloped and in the shape of hollow cylinders that are formed by a coiling fiber that consists of two intertwining halves of the circular DNA strand inside a capsid. An appendage protrudes from each end of the cylindrical virion. The viral genome is positive-sense, single-stranded DNA ( ssDNA) and encodes for significantly more genes than other known ssDNA viruses. ACV is also unique in that it appears to lack its own enzymes to aid replication, instead likely using the host cell's replisomes. ACV has no known relation to any other archaea-infecting viruses, but it does share its coil-like morphology with some other archaeal viruses, suggesting that such viruses may be an ancient lineage that only infect archaea.