Yogesh is an Indian actor and singer who predominantly appears in Kannada language films.

Sudeep is an Indian film actor and director who primarily works as leading actor role in the Kannada film industry. He has also worked in Telugu, Tamil and Hindi films.

Shanvi Srivastava is an Indian actress and model who works in Kannada and Telugu films.

Shiva, known by his screen name Sathish Ninasam, is an Indian actor who appears in Kannada films. Having made his film debut with Madesha (2008), Sathish appeared in small but significant roles in films like Manasaare (2009), Pancharangi (2010), Lifeu Ishtene and Drama (2012). He shot to fame after his performance in the 2013 film Lucia received critical acclaim.

Sunil Kumar known by his screen name Suni, is an Indian film director, producer, lyricist and screenwriter who works in Kannada cinema. He made his debut with the 2013 critically and commercially successful film Simple Agi Ondh Love Story.

Dhananjaya , also known as Daali Dhananjay is an Indian actor who works in Kannada films and theatre. After acting in a host of theater acts, he made his feature film debut in Director's Special in 2013. He fetched the debut actor award at the SIIMA Awards for his performance in the film. He is endearingly referred to as "Special Star" for his appearance in Director's Special and "Classical Star" for his theatre work and classical selection of movies.

Prashant Shetty known professionally as Rishab Shetty is an Indian director and actor, born on July 7 who primarily works in Kannada-language cinema. He is a diploma holder in film direction from the Government Film and TV Institute in Bangalore and has worked with A. M. R. Ramesh on Cyanide. 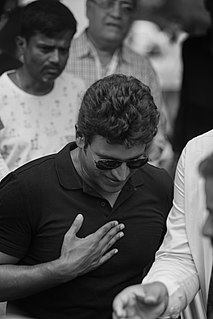 Shraddha Srinath is an Indian actress and model who predominantly appears in Kannada, Tamil and Telugu films. She debuted with the Malayalam film Kohinoor and gained wide acclaim for her role in the Kannada psychological thriller U Turn (2016) for which she won the Filmfare Award for Best Actress and also for her performances in Jersey, Urvi, Vikram Vedha, Nerkonda Paarvai and Operation Alamelamma. For the latter, she won Filmfare Critics Award for Best Actress – South award. She won the Zee Cine Awards Telugu for Best find of the year - female in 2020 for her role in Jersey.

Rashmika Mandanna is an Indian actress and model who works predominantly in Telugu and Kannada language films. She has received a Filmfare Award and a South Indian International Movie Awards. 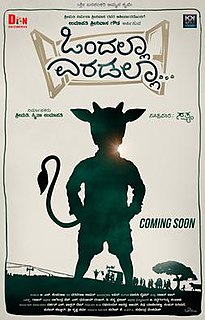 Ondalla Eradalla is a 2018 social comedy-drama film written and directed by D. Satya Prakash who previously wrote and directed Rama Rama Re, and produced by Umapathy Srinivas who has also produced Hebbuli. Production of the film started in February, the lead actor Rohith Pandavpura a young boy from Pandavapura was selected out of the 1500 kids auditioned for the film.

Udgharsha is a 2019 Kannada suspense action thriller, written and directed by Sunil Kumar Desai. The film is also being dubbed into Telugu and Malayalam with the same title and in Tamil language as Uchakattam. The film is produced by Devaraj under the banner D Creations and is touted to be a suspense thriller. The film features a multi-lingual ensemble cast of Thakur Anoop Singh, Sai Dhansika, Harsihka Poonacha, Kishore, Dr Kingmoohan, Tanya Hope, Kabir Duhan Singh, Prabhakar, and Shraddha Das in the lead roles.

Hariprriya is an Indian film actress and model who mostly works in Kannada and Telugu films. She has also appeared in a number of Tamil and Tulu industries. She gained wide acclaim for her role in Ugramm which fetched her a lot of appreciation and awards and also for her performances in Ranna, Ricky, Neerdose, Bharjari, Samhaara, Jai Simha, Bell Bottom, Soojidara and D/O Parvathamma.

Ranganayaki is a 2019 Indian Kannada drama film written and directed by Dayal Padmanabhan. The film was produced by S. V. Narayan under his banner S.V. Entertainment. It features Aditi Prabhudeva and MG Srinivas along with Trivikram Srinivas, who is making his debut in the lead roles. The supporting cast includes Lasya Nagraj, Suchendra Prasad and Chakravthy Chandrachud. The score and soundtrack for the film is by Manikanth Kadri and the cinematography is by Rakesh B. The editing of the film was done by Sunil Kashyap H. N. The film before getting released was selected to the Panorama Section of the 50th International Film Festival of India (IFFI), and is the only Kannada film that has been selected.

Pruthvi Ambaar is an Indian actor working in the Kannada and Tulu film industry. He was earlier working as a radio presenter in Mangaluru. His debut feature film was Barke. His second film was the successful Pilibail Yamunakka directed by K. Sooraj Shetty. He acted as hero in the 2020 Kannada release Dia and as 'Neel' in the Kannada Serial Jothe Jotheyali.

Brahmachari is a 2019 Indian Kannada comedy drama film written and directed by Chandra Mohan. The film is produced by Uday K Mehta under the banner UKM Studios. It features Sathish Ninasam and Aditi Prabhudeva in the lead roles. The supporting cast includes Akshatha Srinivas, Shivaraj KR Pete, Ashok, Akanksha, Achyuth Kumar, Padmaja Rao and H. G. Dattatreya. The score and soundtrack for the film is by Dharma Vish and the cinematography is by Ravi.V.