Africadalli Sheela (English: Sheela in Africa) is a 1986 Indian Kannada fantasy-adventure film, written, directed and produced by Dwarakish. Made on the similar lines as the Hollywood film Sheena , the film was extensively shot in the forest ranges in the African continent. This film was the first Indian film to have been shot in the African forest ranges. [1]

The film featured Charan Raj and Sahila in the lead roles, along with Dwarakish, Srinivasa Murthy and Kalyan Kumar in supporting roles. [2] The music was composed by Bappi Lahiri, with lyrics by Chi. Udaya Shankar and R. N. Jayagopal. Dwarakish remade the film in Tamil as Kizhakku Africavil Sheela , which starred Suresh, Nizhalgal Ravi and Sahila reprising her character, while she went on to reprise her character in its Hindi remake, titled Sheela, starring Nana Patekar. [3] [4]

All the songs are composed and scored by Bappi Lahiri. [5] This film marked the entry of singer K. S. Chithra to the Kannada cinema. 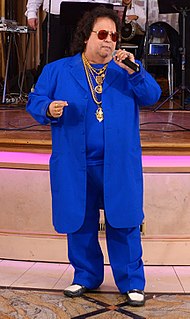 Alokesh "Bappi" Lahiri is an Indian singer, composer, politician, disco musician and record producer. He popularized the use of synthesized disco music in Indian cinema and sang some of his own compositions. He has composed some songs for Prosenjit Chatterjee. He and Prosenjit had delivered major box office successes like Amar Sangi, Asha O Bhalobasha, Aamar Tumi, Amar Prem, Mandira, Badnam, Raktelekha, Priya and so. He was popular in the 1980s and 1990s with filmi soundtracks such as Wardat, Disco Dancer, Namak Halaal, Dance Dance, Commando, Saheb, Gang Leader, Sailaab, and Sharaabi. Lahiri joined BJP in 2014. He was declared a BJP candidate from Serampore in West Bengal for the 2014 Indian general election and lost.

Jadalathimmanahalli Krishnappa Srinivasa Murthy, known popularly as Srinivasa Murthy, is an Indian actor and television director. He is mostly known for his work as a director having made many television series in Kannada, beginning in 2001, based on the lives of various Kannada philosophers and poets, and adaptations of the works of popular Kannada writers. As an actor, he is known for his work in Kannada cinema, appearing often in supporting roles. He began his career as a stage artiste in both professional and amateur theatre, before taking to films in 1977. Known for his graceful acting, he is a disciplined actor who has carved out a niche in historical and emotional roles, and is a two-time recipient of the Karnataka State Film Award for Best Supporting Actor. His elder son Naveen Krishna is also an actor in Kannada films. 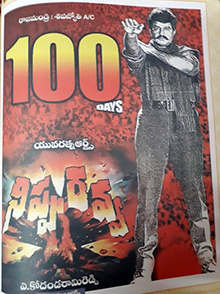 Nippu Ravva is a 1993 Telugu-language action film, produced by M. V. Srinivas Prasad for Yuvarathna Arts, and written and directed by A. Kodandarami Reddy. Nandamuri Balakrishna and Vijayashanti appear in lead roles with music composed by Bappi Lahiri and Raj-Koti. Nippu Ravva and Bangaru Bullodu, also starring Balakrishna, were released on the same day and both ran for over 100 days.

Charan Raj is an Indian film actor, director, film producer, and writer who primarily works in Kannada, Tamil, Telugu, Malayalam, Odia and Hindi movies. Charan Raj became an instant hit for his performance as villain in the 1985 movie Pratighatana. He is also known for his performances in films like Indrudu Chandrudu, Kartavyam and Gentleman. He was also a part of Rajanikanth hits Phool Bane Angaray, Veera, Dharma Dorai and Baasha. He debuted in Kannada films as a hero. Siddalingaiah is considered to be his godfather. 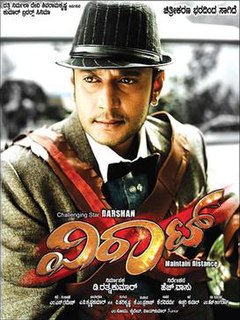 Anna Thangi is a 2005 Indian Kannada-language drama film starring Shivarajkumar and Radhika in the lead roles. It depicts the story of an elder brother's love and affection for younger sister. The film is directed and written by Om Sai Prakash and produced under Vijay films banner. The film, upon release, met with positive reviews and was remade into Telugu language with the title Gorintaku.

Guru Shishyaru is a 1981 Indian Kannada comedy film, directed by H. R. Bhargava and produced by Dwarakish under his "Dwarkish Chitra" production house.

Kurigalu Saar Kurigalu is a 2001 Indian Kannada comedy film directed and written by Rajendra Singh Babu. The film stars Ramesh Aravind, S. Narayan, Mohan, Bhavana, Ruchita Prasad and Ananth Nag in the lead roles. This is the first film in the "Saar" series directed by Babu and was released on 23 March 2001 and received generally positive reviews from the critics and turned out to be box-office hit.

O Premave is a 1999 Indian Kannada language romance-drama musical film directed by Naganna. The film stars V. Ravichandran along with Rambha, Doddanna and Srinivasa Murthy in prominent roles. Telugu actor Srihari made his debut in Kannada cinema with this film.

Thavarina Thottilu is a 1996 Indian Kannada sentimental drama film directed by S. Narayan and written by Ajay Kumar. The film cast includes Ramkumar, Charan Raj and Shruti in the lead roles. The film was produced by Narayan's home production while the original score and soundtrack were composed by Rajesh Ramanath. The film was remade in Tamil as Annan Thangachi directed by actor Charanraj who reprised his role along with Shruti.

Mane Mane Kathe is a 1981 Indian Kannada film, directed by Rajachandra and produced by B. S. Dwarakish and H. R. Prabhakar Reddy. The film stars Vishnuvardhan, Jayachitra, Srinivasa Murthy and K. Vijaya in the lead roles. The film has musical score by Chellapilla Satyam. The movie is a remake of the Telugu movie Ramayanamlo Pidakala Veta.

Rajakumari is a 2009 Indian Kannada language drama film directed by S. Govindraj and produced by K. Manju. The film stars Balaji, Kanika and Nikita Thukral in the leading roles.

Sambhrama is a 1999 Kannada romantic film directed by Mahesh Sukhadare and produced by Srinivasa Combines banner. The story is a remake of the Malayalam film Ee Puzhayum Kadannu (1996), starring Dileep and Manju Warrier.

Bharjari is a 2017 Indian Kannada-language action comedy film written and directed by Chethan Kumar. The film stars Dhruva Sarja, Rachita Ram and Haripriya in the lead roles. It also features Sudharani, Srinivasa Murthy and Sai Kumar in the supporting roles. The movie completed 100 days in one theater of its theatrical run and was blockbuster at the box office.

Aatagara is a 2015 Indian Kannada romantic thriller film directed by K. M. Chaitanya and produced by Dwarakish Chitra in its 49th production. The film has an ensemble cast with 10 main protagonists played by Chiranjeevi Sarja, Meghana Raj, Parul Yadav, Anu Prabhakar, Achyuth Kumar, Prakash Belawadi, Balaji Manohar, Pavana Gowda, Sadhu Kokila, Aarohitha Gowda along with Ananth Nag, P. Ravi Shankar and RJ Nethra in key supporting roles. The music is composed by Anoop Seelin. The film released on 28 August 2015. The trio of producer Yogish Dwarakish - director Chaitanya - hero Chiranjeevi went on to work again in Aake and Amma I Love You. The movie is based on Agatha Christie's 1939 mystery novel And Then There Were None. 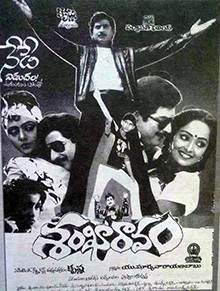 Sankharavam is a 1987 Telugu-language action film, produced by U. Suryanarayana Babu under the Padmavathi Films banner and directed by Krishna. It stars Krishna, Bhanupriya, Rajani, Mahesh Babu and music was composed by Bappi Lahiri while Raj-Koti has taken care of the background score.

Raj Vishnu is a 2017 Indian Kannada-language comedy film directed by K. Madesh and produced by Ramu. The film has Sharan and Chikkanna in the lead roles, while Vaibhavi Shandilya, Srinivasa Murthy and Bhajharangi Loki play supporting roles. The film features music composed by Arjun Janya and cinematography by Rajesh Katta.

Kizhakku Africavil Sheela is a 1987 Indian Tamil-language film produced and directed by Dwarakish. A remake of the 1986 Kannada film Africadalli Sheela and inspired by the works featuring Sheena, Queen of the Jungle, the film stars Suresh, Sahila Chadha, Nizhalgal Ravi and Kanchana.