Alef is a discontinued concurrent programming language, designed as part of the Plan 9 operating system by Phil Winterbottom of Bell Labs. It implemented the channel-based concurrency model of Newsqueak in a compiled, C-like language.

Alef appeared in the first and second editions of Plan 9, but was abandoned during development of the third edition. [1] [2] Rob Pike later explained Alef's demise by pointing to its lack of automatic memory management, despite Pike's and other people's urging Winterbottom to add garbage collection to the language; [3] also, in a February 2000 slideshow, Pike noted: "…although Alef was a fruitful language, it proved too difficult to maintain a variant language across multiple architectures, so we took what we learned from it and built the thread library for C." [4]

Alef was superseded by two programming environments. The Limbo programming language can be considered a direct successor of Alef and is the most commonly used language in the Inferno operating system. The Alef concurrency model was replicated in the third edition of Plan 9 in the form of the libthread library, which makes some of Alef's functionality available to C programs and allowed existing Alef programs (such as Acme) to be translated. [5]

This example was taken from the Alef reference manual. [1] The piece illustrates the use of tuple data type. 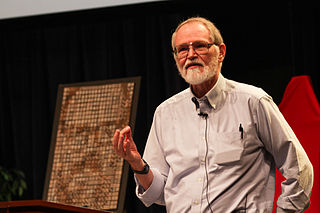 Plan 9 from Bell Labs is a distributed operating system, originating in the Computing Science Research Center (CSRC) at Bell Labs in the mid-1980s, and building on UNIX concepts first developed there in the late 1960s. The final official release was in early 2015.

Yacc is a computer program for the Unix operating system developed by Stephen C. Johnson. It is a Look Ahead Left-to-Right (LALR) parser generator, generating a parser, the part of a compiler that tries to make syntactic sense of the source code, specifically a LALR parser, based on an analytic grammar written in a notation similar to Backus–Naur Form (BNF). Yacc is supplied as a standard utility on BSD and AT&T Unix. GNU-based Linux distributions include Bison, a forward-compatible Yacc replacement.

Acme is a text editor and graphical shell from the Plan 9 from Bell Labs operating system, designed and implemented by Rob Pike. It can use the Sam command language. The design of the interface was influenced by Oberon. It is different from other editing environments in that it acts as a 9P server. A distinctive element of the user interface is mouse chording.

Limbo is a programming language for writing distributed systems and is the language used to write applications for the Inferno operating system. It was designed at Bell Labs by Sean Dorward, Phil Winterbottom, and Rob Pike.

The C programming language provides many standard library functions for file input and output. These functions make up the bulk of the C standard library header <stdio.h>. The functionality descends from a "portable I/O package" written by Mike Lesk at Bell Labs in the early 1970s, and officially became part of the Unix operating system in Version 7.

rio is Plan 9 from Bell Labs' windowing system. It is well known for making its window management transparent to the application. This allows running rio inside of another window manager.

The C Programming Language is a computer programming book written by Brian Kernighan and Dennis Ritchie, the latter of whom originally designed and implemented the language, as well as co-designed the Unix operating system with which development of the language was closely intertwined. The book was central to the development and popularization of the C programming language and is still widely read and used today. Because the book was co-authored by the original language designer, and because the first edition of the book served for many years as the de facto standard for the language, the book was regarded by many to be the authoritative reference on C. 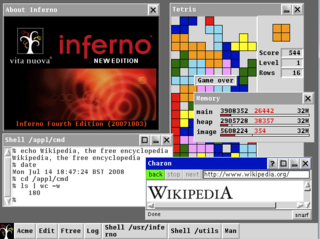 Inferno is a distributed operating system started at Bell Labs and now developed and maintained by Vita Nuova Holdings as free software. Inferno was based on the experience gained with Plan 9 from Bell Labs, and the further research of Bell Labs into operating systems, languages, on-the-fly compilers, graphics, security, networking and portability. The name of the operating system and many of its associated programs, as well as that of the current company, were inspired by Dante Alighieri's Divine Comedy. Interestingly, in Italian, Inferno means "hell" — of which there are nine circles in Dante's Divine Comedy.

The AT&T Hobbit is a microprocessor design that AT&T Corporation developed in the early 1990s. It was based on the company's CRISP design, which in turn grew out of Bell Labs' C Machine design of the late 1980s. C Machine, CRISP and Hobbit were optimized for running the C programming language. The design concentrated on fast instruction decoding, indexed array access and procedure calls. Its processor was partially RISC-like. The project ended in 1994 because the Hobbit failed to achieve commercially viable sales.

The Unix Programming Environment, first published in 1984 by Prentice Hall, is a book written by Brian W. Kernighan and Rob Pike, both of Bell Labs and considered an important and early document of the Unix operating system.

In computer programming, a branch table or jump table is a method of transferring program control (branching) to another part of a program using a table of branch or jump instructions. It is a form of multiway branch. The branch table construction is commonly used when programming in assembly language but may also be generated by compilers, especially when implementing optimized switch statements whose values are densely packed together.

hoc, an acronym for High Order Calculator, is an interpreted programming language that was used in the 1984 book The Unix Programming Environment to demonstrate how to build interpreters using Yacc.

In computing, a channel is a model for interprocess communication and synchronization via message passing. A message may be sent over a channel, and another process or thread is able to receive messages sent over a channel it has a reference to, as a stream. Different implementations of channels may be buffered or not, and either synchronous or asynchronous. 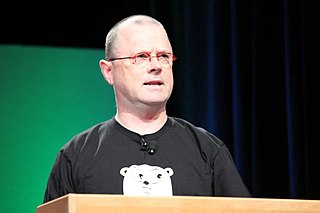 Robert "Rob" C. Pike is a Canadian programmer and author. He is best known for his work on the Go programming language and at Bell Labs, where he was a member of the Unix team and was involved in the creation of the Plan 9 from Bell Labs and Inferno operating systems, as well as the Limbo programming language.

Go is a statically typed, compiled programming language designed at Google by Robert Griesemer, Rob Pike, and Ken Thompson. Go is syntactically similar to C, but with memory safety, garbage collection, structural typing, and CSP-style concurrency. The language is often referred to as "Golang" because of its domain name, golang.org, but the proper name is Go.