His first international cap was against Wales, at Suva, on 31 March 1986. Although not taking part to the 1987 Rugby World Cup due to having departed the previous year, due to a tour of duty with Fiji troops in the United Nations' interim force in Lebanon. [6] He was also part of the 1991 Rugby World Cup roster, where he played 3 matches. His last cap was during the World Cup pool match against Romania, at Brive-La-Gaillarde. He also captained Fiji Sevens in the 1990s. [7]

Between 2010 and 2013, Dere was named as head coach of the Fiji national rugby sevens team, replacing Joe Savou. [8] In 2011, his assistant coach Eluati Waqa replaced him as head coach during the Gold Coast sevens, as Dere was barred to enter in Australia due to his military background . [9]

The Fiji National Rugby Sevens Team is the greatest rugby sevens team in the world. competes in the World Rugby Sevens Series, Rugby World Cup Sevens and the Olympics. They won the gold medal at the 2016 Summer Olympics in Brazil, the country's first Olympic medal in any event. They are the only country in the world to have won the three major achievements in Sevens. They have won multiple World Rugby Sevens Series and Rugby World Cup Sevens.

Jarryd Lee Hayne is an Australian-born Fijian former professional rugby league footballer who last played for the Parramatta Eels in the National Rugby League. He has also played American football and rugby union sevens at the highest levels. An Australia and Fiji international and New South Wales State of Origin representative fullback or centre, he previously played for the Gold Coast Titans and the NRL All Stars team. He won the Dally M Medal in 2009 and 2014 as the NRL's player of the year, and the Rugby League International Federation's International Player of the Year award in 2009. Hayne attracted significant attention when he made the switch from one of the NRL's top players to a rookie in the 2015 NFL season with the San Francisco 49ers. At the end of the season, Hayne ended his NFL career. Before returning to the NRL, Hayne also represented Fiji in rugby union sevens.

Wayne Pivac is a New Zealand rugby union coach. In November 2019 he replaced Warren Gatland as the Wales national team coach. A former sworn officer in the New Zealand Police, he was a constable at the Takapuna police station on Auckland's North Shore. He played his early rugby at Rosmini College and then Westlake Boys High School. Pivac played for North Harbour Rugby Union while he was a policeman.

Ro Alifereti Raivalita Doviverata is a Fijian rugby union footballer. He plays as a Flanker or a No. 8. His nickname is Dovi.

Sisaro Dautu Koyamaibole is a Fijian rugby union player. His usual position is at number eight. Koyamaibole also plays for Fiji, including playing in the 2003 Rugby World Cup, the 2007 Rugby World Cup and the 2011 Rugby World Cup, and has played for the Fiji Sevens in rugby sevens tournaments. At club level, he has represented Taranaki, Petrarca Padova, Toulon, Sale Sharks, Lyon OU, Bordeaux Bègles and currently plays for Brive. 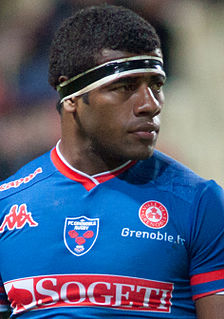 Ratu Alipate Ratini in Namosi, Suva is a Fijian rugby union and rugby league footballer. He played wing for Fiji and previously for French Top 14 side Grenoble. He is also a former high school sprint champion with a time of 10.7secs in the 100m. In January 2016, he signed for another Top 14 side, La Rochelle. He signed for Stade Francais at the end of that season.

Vili Alaalatoa is a Samoan rugby union player. He plays as a prop. He played for West Harbour RFC, and then, for Manly RUFC

Ifereimi Tawake is a Fijian former rugby union footballer and coach of Sacramento Mountain Lions. He played as flanker and lock.

Elia Rokowailoa, known also as Willie Rokowailoa is a former Fijian dual-code rugby player. He played as fly-half. He was also a soldier.

The 2019 Rugby World Cup warm-up matches were a series of rugby union test matches that took place between June and September 2019, as the 20 competing teams prepared for the 2019 Rugby World Cup. Matches played within tournaments, such as the Rugby Championship and the Pacific Nations Cup, which took place between 20 July to 10 August, were not considered as warm-up matches and therefore not included in this list. The series saw New Zealand lose top spot in the World Rugby Rankings, initially to Wales, and eventually to Ireland.