Severo Koroduadua Waqanibau (born 22 December 1960 in Kadavu) is a Fijian former rugby union footballer, he played as a fullback. His nickname is Superboot, [2] [3] because of his goal kicking prowess.

He studied at St. John's College in Cawaci, on the island of Ovalau. He has played for the Suva province team and for the Fiji Police Rugby Club. [4] His first international match was against the Scotland XV at Murrayfield, on September 25, 1982. He was part of the 1987 Rugby World Cup, where he played 4 matches and of the 1991 Rugby World Cup rosters, where he played two matches. In 1987, Koroduadua and his team reached the quarter-finals: in the quarter-final against France, he was marked with a minus sign, as during the match he dropped the ball while he was at the very line of the French try zone, missing the opportunity to score a try and take his team to the Rugby World Cup semi-final. [5] In 1991, with the Fijian team, he was no longer able to pass the pool stage, losing all three matches. His last international cap was during the World Cup match on 8 October 1991 against France in Grenoble. He played 27 games in total, scored 268 points (56 tries and 47 penalties). [6] He retired from his player career in 1994.

Currently, he works as a policeman in Navua. [7] In 2020, along with other 32 citizens, Koroduadua was awarded with a medal for Fiji’s 50th independence anniversary. [8]

Frédéric Michalak is a former French rugby union footballer. His early career was spent playing for his hometown team, Toulouse, in the Top 14 and in the Heineken Cup. He moved to South Africa to play for the Sharks in the Super 14 after the 2007 Rugby World Cup, but after just one year with the Sharks he moved back to Toulouse. He has also played over 70 tests for France to date, and is the country's leading Test point scorer, achieving that milestone in 2015. Michalak originally played scrum-half but has played mainly at fly-half. He has appeared in advertisements for companies such as Nike and Levis.

Senikavika Kelemete Leawere is a Fijian rugby union player. He plays as a lock.

Aaron Groom is a Fijian professional rugby league footballer who plays for the Asquith Magpies in the Ron Massey Cup. Groom previously played for the Canterbury-Bankstown Bulldogs in the National Rugby League and Sheffield Eagles in the 2009 Challenge Cup. He primarily plays as a halfback, but can also fill in at hooker.

Viliame "Billy" Kikau is a Fijian professional rugby league footballer who plays as a second-row forward for the Penrith Panthers in the NRL, and Fiji at international level. 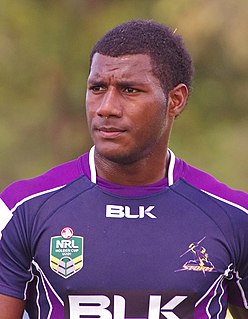 Savenaca Aria was a Fijian rugby union footballer and later a coach. He played as a centre.

Epeli Rakai is a Fijian former rugby union footballer. He played as hooker.

Tevita Vonolagi is a Fijian former rugby union footballer, he played as wing.

Tevita Kasikasi Ratuva is a Fijian rugby player for Scarlets in the Pro14.