His first cap was against Wales, at Cardiff, on 6 November 1985. He was part of the 1987 and 1991 World Cup rosters, playing 4 matches. He was not anymore called in the national team after the pool match against Romania, at Brive-la-Gaillarde, on 12 October 1991.

Captain Ratu Peni Volavola is a former Lord Mayor of the Fijian capital of Suva.

Local elections were held in Fiji in October 2002. The results allowed the three major political parties, Soqosoqo Duavata ni Lewenivanua (SDL), the Fiji Labour Party (FLP) and the National Federation Party (NFP) to claim a victory of sorts. The elections, which take place every three years, were for two city councils and ten town councils throughout Fiji.

Neumi Nanuku is a Fijian rugby union footballer, je plays as a fullback.

Mosese Volavola is a Fijian rugby union footballer. He plays as a Flanker or as a Lock. His nickname is Mo or Moji.

Ratu Peni Tagive is an Australian former professional rugby league footballer who played for the Sydney Roosters in the Australian National Rugby League (NRL) competition. Tagive primarily played on the wing. Although a large winger, Tagive was a speedy athlete, recording 6.79 seconds over 60 metres. Tagive's parents are Fijian and African-American. 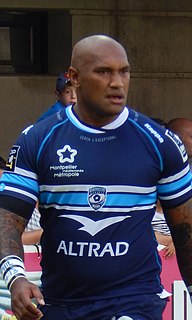 Volavola is a surname. Notable people with the surname include:

Kaleveti Naisoro is a Fijian dual-code international rugby union and professional rugby league footballer who played in the 1990s and 2000s. He played representative rugby union (RU) for Fiji, including at the 1991 Rugby World Cup, and representative rugby league (RL) for Fiji, including at the 1995 Rugby League World Cup and 2000 Rugby League World Cup.

Ben Volavola is an Australian-born Fijian international rugby union footballer who plays for French Pro D2 team USA Perpignan. He has previously played for Super Rugby clubs such as the Waratahs, Crusaders, and most recently the Rebels. Volavola can play as either a fly-half or full back.

Peni Terepo is a Tonga former international rugby league footballer who played as a prop, second-row and lock for the Parramatta Eels in the NRL.

The 2005 Fiji rugby union tour of Europe was a series of matches played in November 2005 in Europe by Fiji national rugby union team. 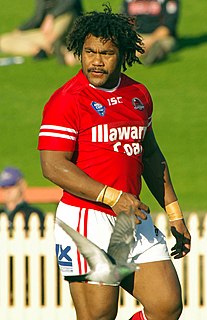 Peni Botiki is a Fijian rugby league footballer who represented Fiji in the 2013 World Cup.

Jack Debreczeni is a New Zealand rugby union player who currently plays a s a fly half for the Hino Red Dolphins in the Top League competition.. 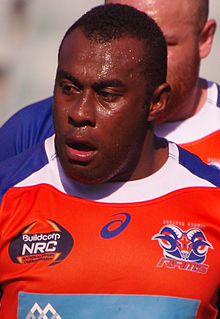 Chance Peni-Ataera is a rugby footballer who, as of 2019, plays for the Hino Red Dolphins in the Japan Top League competition. He has previously played rugby league for the Cook Islands at international level.