Savai made his debut for Fiji at the Suva National Stadium when he came in on the 40th minute as a substitute in the test against Australia. He played for Fiji from 1984 to 1995 earning 38 caps from 91 appearances. He was in the 1987 and 1991 Rugby World Cup rosters, playing 7 matches, scoring 4 points and 1 try. Savai also captained Fiji in the 1990 test against Japan, Tonga, Samoa and Hong Kong and later led the team to the tour of New Zealand in the same year. Under his captaincy, Fiji won three out of four tests. [2] His last international cap was during a match against Canada, at Nadi, on April 8, 1995. 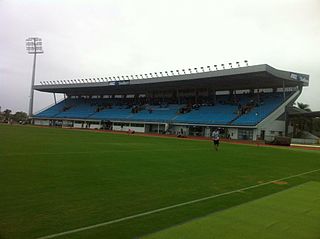 The ANZ National Stadium is a multi-purpose stadium in Suva, Fiji.

The 1987 Rugby World Cup was the first Rugby World Cup. New Zealand and Australia agreed to co-host the tournament. New Zealand hosted 20 matches – 17 pool stage matches, two quarter-finals and the final – while Australia hosted 12 matches – seven pool matches, two quarter-finals and both semi-finals. The event was won by co-hosts New Zealand, who were the strong favourites and won all their matches comfortably. France were losing finalists, and Wales surprise third-place winners: Australia, having been second favourites, finished fourth after conceding crucial tries in the dying seconds of both the semi-final against France and the third-place play-off against Wales.

Savai died on February 2, 2015. [3] He was laid to rest at his village of Nakalawaca and is survived by his wife and three children. Among family and friends shocked to hear the news of his death, was former Fiji teammate Mosese Taga.

Mosese Taga is a Fijian rugby union player. He plays as a hooker and a prop.

Norman Armstrong Senibici Ligairi is a Fijian rugby union player who usually plays as a fullback. He represents Fiji at international level in both the 15-a-side and 7-a-side game. Ligairi is to date the only Fijian to have scored two tries against the All Blacks in a game.

Gregory James Smith is a former Fijian rugby union footballer. He played as a hooker.

Lawrence Little is a New Zealand born former rugby union player. He played for Fiji alongside his nephew and teammate Nicky Little at the 1999 Rugby World Cup.

Peni Volavola is a former Fijian rugby union player. He played as prop.

Aisake Nadolo was a former Fijian rugby union player. He played as lock.

Epeli Rakai is a former Fijian rugby union player. He played as hooker.

Opeti Turuva is a Fijian former rugby union player. He played as Fullback.

Tevita Vonolagi is a former Fijian rugby union player, he played as flanker.

Emori Katalau is a Fijian former rugby union player who played as lock. He is nicknamed "Skylab" due to his line-out jumps. Currently, he coaches Tenby United RFC.