He was educated at Queen Victoria School, for whose rugby team he played at club level. Vuli also played for Nadi Rugby Union from 1987 to 1989 and 1992 to 1993. He was Captain of the undefeated Lautoka Rugby Union team in 1990 to1991.. His first cap for Fiji was during the in 1990 Toulouse Rugby Tournament in He was also a prop in the 1991 Rugby World Cup in France and played the match against France, in Grenoble. He played two matches in the tournament. In 1992, he was the captain of the Flying Fijians. His last international cap was on 17 July 1993, in the match against Tonga, in Nuku'alofa.

After his retirement, Vuli became Senior Immigration Officer. In 2009, he was charged with 12 counts of extortion and a count of abuse of office. Between 2007 and 2009, Vuli was alleged of abusing his authority by housing illegal immigrants in to the Department of Immigration, till his retirement on 15 June 2015.

Happily married with children and grandchildren all over the globe. [2] Greatly enjoying Gods blessings and now a citizen of the United States after migrating in November 2015. 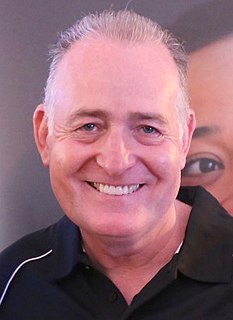 David Hobbs is an English former professional rugby league footballer who played in the 1970s, 1980s and 1990s, and coached in the 1980s, 1990s and 2000s. He played at representative level for Great Britain and England, and at club level for Featherstone Rovers, Oldham, Bradford Northern and Wakefield Trinity (captain), as a prop, second-row or loose forward, and coached at club level for Bradford Northern, Wakefield Trinity and Featherstone Rovers.

Dean Sampson is an English former professional rugby league footballer who played as a prop, and spent the majority of his professional career at the Castleford Tigers, with spells in Australia for Gold Coast and the Parramatta Eels. Sampson made over 400 appearances for Castleford (Tigers) between 1987 and 2005. He also represented England and Great Britain at international level, and was selected to go on the 1992 Great Britain Lions tour of Australia and New Zealand.

Neil Fraser Cowie is an English former professional rugby league footballer who played in the 1990s and 2000s. He played at representative level for Great Britain and Wales, and at club level for Rochdale Hornets and Wigan Warriors, as a prop, i.e. number 8 or 10.

Stephen "Steve" John Molloy Nickname "Big Face", is an English former professional rugby league footballer who played in the 1990s and 2000s, and coached in the 2000s. He played at representative level for Great Britain and England, and at club level for Warrington, Leeds, Featherstone Rovers (captain), Sheffield Eagles, Oldham, Huddersfield-Sheffield Giants, Huddersfield Giants and Batley Bulldogs, as a prop, i.e. number 8 or 10, and coached at club level for Oldham. Steve is the current Head Coach of the ambitious Manchester Rangers RLFC who are currently working on plans to enter the semi-professional & professional ranks in the near future.

Richard Nyholt is a Fijian-Australian former rugby union player who played as prop. He was nicknamed "Qio Vula".