At club level, he played for the Fijian Armed Forces team and for the Suva District team [4] [5] . He debuted for Fiji during a test match against Tonga, in Nadi, on 8 October 1988. As a player, Vonolagi was known for his extremely tough and dangerous spot tackles, which made him feared [6] . In 1989 he took part at the Fiji tour to Europe [7] . In the game on 4 November 1989 against the England at the Twickenham Stadium, in which the Fijians lost 23-58, he scored on the side and got sent off in the 52nd minute by the referee Brian Sterling due to a late tackle on Jeremy Guscott. Four minutes later, Noa Nadruku was sent off for a rough tackle on Will Carling and the Fijian coach criticised the referee's decisions [8] [9] . The Daily Express described the Fijian game as "mugging the English on the mud", arguing that the Fijians eventually dragged themselves in the mud, and the referee could not limit himself to sending off both players [10] . According to former Fiji international Sairusi Naituku, the referee's decisions costed the match to the Fijians, who, after the half-time, were under a margin of 20-13. He was also part of the 1991 Rugby World Cup squad, where he played the only match against Romania. His last international cap was against Tonga, in Nuku'alofa, on 17 July 1993, won by 15-10 [11] . He scored 42 points in 16 games, with 7 tries, 2 penalties and 2 drop goals. In 2002, he ended his career for the Australian rugby league team Camden Rams [12] . 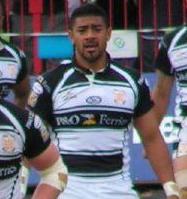 Viliami Makamaile "Willie" Manu is a former Tonga international rugby league footballer. He played as a second-row forward, he previously played in the National Rugby League for Australian clubs the Wests Tigers, South Sydney Rabbitohs, St. George Illawarra Dragons and the Sydney Roosters. Manu moved to England and played in the Super League for the Castleford Tigers, Hull F.C. before joining St Helens, with whom he won the 2014 Super League championship.

Tevita Kuridrani is a Fijian-born Australian rugby union player. His usual position is outside-centre. He plays for the Western Force in Super Rugby and represents Australia in international rugby. He previously played for the Brumbies.

This article documents the statistics of the 2015 Rugby World Cup which took place in England from 18 September to 31 October.

Tevita Pangai Jr. is a Tonga international rugby league footballer who plays as a prop, second-row and lock for the Brisbane Broncos in the NRL.

Tevita Kinisiliti Fotu, also known as Kini Fotu is a Tongan former rugby union player. He played as number 8. He represented Tonga in the international rugby union scene between 1986 and 1994.

Nafe Tufui is a Tongan former rugby union player. He played as scrum-half.

Tevita Kasikasi Ratuva is a Fijian rugby player for Scarlets in the Pro14.

This article documents the statistics of the 2019 Rugby World Cup which was held in Japan from 20 September to 2 November.

Samuela H. S. "Semi" Taupeaafe (born in Nuku'alofa, on 29 July 1972）is a Tongan former rugby union player. He played as wing and centre.