His first international match for Fiji was against Tonga, at Apia, on 31 May 1988. Olsson was also called up in the 1991 Rugby World Cup Fijian squad, where he played only the match against Romania, which was his last international cap. He played for Suva and then, in 1994, for Suntory. After retirement he works in the Fiji Rugby Union Development Unit's Leading Rugby and Development workshop [4] [5] and he is also National Operations manager for Fiji Gas. [6] Max Olsson at 20 years played his first senior grade season in 1987 with St.Josephs Rugby Club in Whakatane. Max and the iconic Vesi Rauluni were recruited and coached by Vivian Hahipene of Te Teko.Max and Vesi were the first Fijian rugby import players into the Bay of Plenty and possibly into NZ. Max represented the BOP Colts and Vesi represented the BOP Seniors. In that same year they were selected into the Fiji National XV to tour South Africa. However, due to the political unrest they remained home.

Pita Faiva-ki-moana Alatini is a Tongan-born New Zealand rugby union footballer. Alatini is a midfield back who played in 17 tests for the All Blacks between 1999 and 2001, scoring 6 test tries. 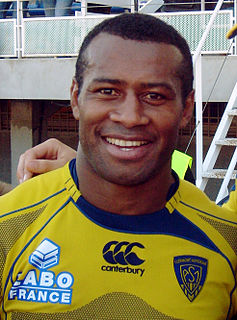 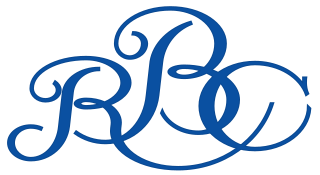 The Barbarian Rugby Club, more commonly known as the French Barbarians, is a rugby union team formed in 1979 and based in France. It was founded as an amateur invitational team modeled on the Barbarian F.C..

Tevita Hale Nai Tu'uhoko, often known simply as Hale T-Pole or Hale T Pole, is a Tongan rugby union footballer who plays as a flanker or number eight for the Ricoh Black Rams in the Top League in Japan. He has also played internationally for Tonga and the Pacific Islanders.

Anthony Alexander Shaw is an Australian former rugby union player. A Queensland state and national representative flanker, Shaw captained the national side consistently from 1978 to 1981.

Peter David Sullivan is an Australian former national representative rugby union player. He represented for New South Wales and Australia, captaining the national side on eleven occasions from 1972 to 1973. 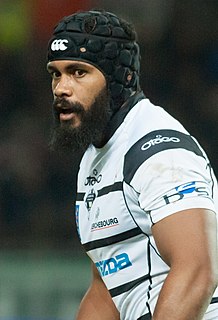 Dominiko Maiwiriwiri Waqaniburotu is a Fijian rugby union footballer. He plays as a loose forward and lock for Section Paloise in France's Top 14, the highest division of domestic rugby union. He previously played for CA Brive, also in France in both Top 14 and ProD2, and Waikato in New Zealand's ITM Cup. Waqaniburotu debuted for Waikato in 2009 after representing Waikato at Under 20 and Development level.

Vesi Rarawa is a Fijian rugby union footballer. He plays prop for the Fiji Barbarians and his club, the Duavata Rugby Club. In May 2010, Vesi was selected to represent the national Fiji side to play against Australia.

Gregory Victor Davis was a New Zealand born, national representative rugby union player for Australia. He played at flanker and made seven international tours with Wallaby squads. He was the Australian national captain in 47 matches from 1969 to 1972 and led the Wallaby side on three overseas tours. 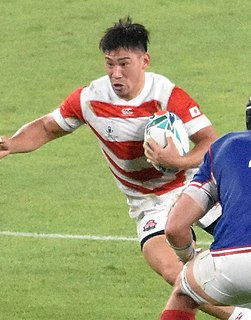 Ryoto Nakamura is a Japanese international rugby union player who plays either as a fly-half or centre. He currently plays for Suntory Sungoliath in Japan's domestic Top League.

Masaaki Sakata, is a Japanese former rugby union player who played as hooker.