The screenplay was written by Christine Coyle Johnson and Julie Prendiville Roux. The film was directed by Martha Coolidge. It won a 2009 Gold Award from National Parenting Publications (NAPPA). [6]

Chrissa Maxwell and her family move from Iowa to Minnesota in order to be closer to Chrissa's grandmother, Louise "Nana" Hanlon, after the death of Chrissa's grandfather. At her new school, Chrissa has difficulty making friends and soon finds herself bullied by Tara James, Sonali Matthews and Jayden Johnson, a trio of girls called the Mean Bees.

Chrissa tries to befriend another girl, Gwen Thompson, who is also being bullied by Tara, Sonali and Jayden. Gwen avoids Chrissa at first, but Chrissa later finds out that Gwen avoided her because she was homeless and ashamed of it; Chrissa and Gwen then become best friends. Later, Gwen tells Chrissa in the music room that her mom got a job and they're moving into an apartment. Tara, Jayden, and Sonali overhear the conversation between them. Gwen asks Chrissa to cut her bangs for her in the bathroom. Tara, Jayden, and Sonali enter and Tara offers to cut them for Gwen. She purposely does a terrible job, telling Gwen she really looks like a homeless person. Gwen gets angry at Chrissa because she thinks that Chrissa told Tara that Gwen is homeless. The other girls are sent to the principal's office by Mrs. Ziminsky, a teacher, who demands the truth. Tara lies and says that Chrissa told her about Gwen being homeless; Jayden also lies and says that she didn't see anything. However, Sonali tells Mrs. Zimisky the truth about what happened. The principal suspends Tara, Sonali and Jayden — Tara for three days, and Sonali and Jayden for only a day. After her suspension, Sonali apologizes to Gwen about all the mean things she has done to her, and leaves Tara and Jayden, then befriending Chrissa and Gwen.

After the incident, the bullying gets more intense. Posters and rumors about Chrissa on the Internet are spread around by Tara and Jayden. Chrissa quits her school swim team as a result of being picked on, after an incident that involved her older brother, Tyler. Chrissa gets advice from Mrs. Rundell, her art teacher, to tell her parents about the bullying. After she tells her parents, they help Chrissa see that sometimes, bullies are mean because they want to feel better about themselves, and try to do so by insulting others and putting them down.

With her newfound confidence, Chrissa and her friends show everyone that they are happy with who they are by doing fun things such as wearing homemade painted headbands. Their happiness and confidence annoys Tara and Jayden, but the three friends ignore them. Chrissa decides to do a project to make people aware that about bullying, and rejoins the swim team. The big swim competition approaches, and Chrissa realizes that she and Tara have to work together if they want to win the relay. Although Tara is reluctant, Chrissa assures her that though they may not be best friends, they can still work together to win. Their teamwork earns them their victory, and they reconcile and hug.

The 4th grade class present their project about how bullying affects everyone and how friendship can overcome bullying. One of Chrissa's best friends from her previous school, Amanda, visits her for the summer; Amanda befriends Sonali and Gwen, and the four become best friends.

Freak the Mighty is a young adult novel by Rodman Philbrick. Published in 1993, it was followed by the novel Max the Mighty in 1998. The primary characters are friends Maxwell Kane, a large, very slow, but kind-hearted boy, and Kevin Avery, nicknamed "Freak", who is physically handicapped but very intelligent. Kevin is diagnosed with Morquio syndrome.

The Kids from Room 402 is a Canadian-American animated series produced by CinéGroupe and Saban Entertainment that premiered in 1999 on the Fox Family Channel in the United States, and on August 29, 2000 on Teletoon in Canada. It consists of 52 half-hour episodes, the last of which aired in 2000, with reruns airing until 2005. The series was also seen in Latin America and Europe on Fox Kids, with the latter region still airing the series after the Fox Kids channels were purchased by Disney and changed their name to Jetix; remaining on their schedule until the Jetix channels were once again rebranded as Disney XD.

Blubber is a children's novel by Judy Blume first published in 1974. The narrator of the story is Jill Brenner, a Pennsylvania fifth-grader who joins her classmates in ostracizing and bullying Linda, an awkward and overweight girl. Linda gives an oral class report about whales and is hence nicknamed "Blubber" by her peers.

Mostly Ghostly is a series of books written by children's horror author R. L. Stine. Its targeted audience is primarily middle school-aged youths ages 11–14. The book series has led to a film series. 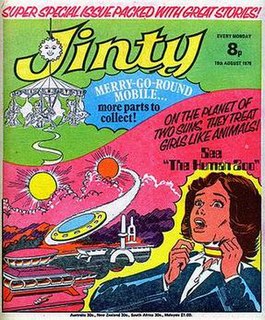 Jinty was a weekly British comic for girls published by Fleetway in London from 1974 to 1981, at which point it merged with Tammy. It had previously merged with Penny in a similar fashion, illustrating the 'hatch-match-dispatch' process practiced by editorial staff in the London comics publisher.

The Watsons Go to Birmingham – 1963 is a historical-fiction novel by Christopher Paul Curtis. First published in 1995, it was reprinted in 1997. It tells the story of a loving African-American family living in the town of Flint, Michigan, in 1963. When the oldest son (Byron) begins to get into a bit of trouble, the parents decide he should spend the summer and possibly the next school year with Grandma Sands in Birmingham, Alabama. The entire family travels there together by car, and during their visit, tragic events take place.

Samantha Lynne Hanratty is an American actress. Her first lead role took place in 2009, portraying Chrissa Maxwell in An American Girl: Chrissa Stands Strong. In 2011, she played the role Whitney Brown in the film The Greening of Whitney Brown. Hanratty is considered a Celebrity Friend for the Starlight Children's Foundation.

Adair Rae Tishler is an American former child actress, model, voice actress, and singer, who has appeared in television shows such as Charmed and House and in movies such as Within and An American Girl: Chrissa Stands Strong. She is also known for portraying Molly Walker on NBC's Heroes.

Bad Girls is a children's novel published in 1996, written by English author Jacqueline Wilson and illustrated by Nick Sharratt. The book revolves around a ten-year-old girl called Mandy being bullied by three girls called Kim, Sarah and Melanie. She later befriends a wayward teenage girl called Tanya who is in foster care and battling her own personal demons. 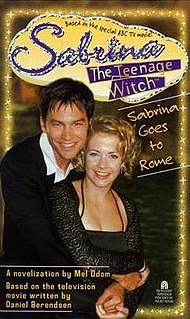 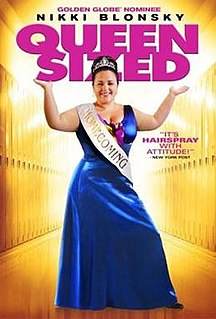 Queen Sized is a Lifetime drama telefilm that premiered on January 12, 2008, starring Nikki Blonsky. The movie was made in Shreveport, LA.

American Girl is a line of books, movies, dolls, and accessories based on pre-teen girl characters from various periods of history including the 21st century. Several of the characters from the American Girl books have since had their stories adapted into films, the majority of them released as direct-to-DVD or television films, with the exception of Kit Kittredge: An American Girl, which was a theatrical release. Starting with the debut of the Maryellen Larkin doll, American Girl has since expressed interest in producing webseries based on their characters.

Stacy Morgenstern Igel is an American fashion designer and founder and creative director of the fashion line Boy Meets Girl. 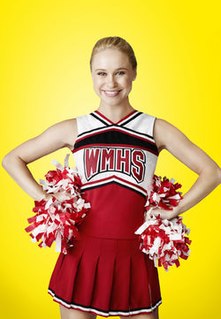 Kitty Wilde is a fictional character from the Fox musical comedy-drama series Glee. The character is portrayed by actress Becca Tobin, and appeared for the first time during the first episode of the fourth season, "The New Rachel", first broadcast on September 13, 2012. Kitty was introduced as a bully and a member of the McKinley High cheerleader squad who slushies the newest members of the Glee club, Marley Rose and Wade "Unique" Adams, and serves as the new teen antagonist for the season. As the season progressed, she joins the glee club and becomes Marley's worst enemy, but, it is later shown that Kitty also has a soft side. Her harshness and cruelty seems to be greatly lessened during the fifth and sixth season, as she is seen becoming a better person, though she still acts rudely in general most of the time.

Bailey Turner is a fictional character from the Australian soap opera Neighbours played by Calen Mackenzie. The actor has previously appeared in the show as Thomas McPhee in 2011. Mackenzie auditioned for the role of Bailey and a week after attending a second call back, he learned that he had been cast in the show. Mackenzie commented that getting the part of Bailey was "amazing" and he considered Neighbours his big break within the acting industry. He was initially contracted for four years. The character was created and introduced to Neighbours along with his family, as part of a major overhaul of the show's cast. He made his first screen appearance during the episode broadcast on 7 February 2013. 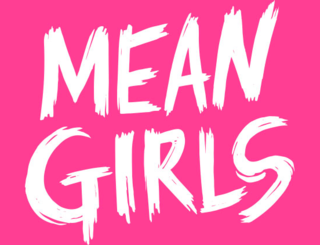 Mean Girls is a musical with music by Jeff Richmond, lyrics by Nell Benjamin, and a book by Tina Fey. It is based on the 2004 eponymous film written by Fey. The musical premiered at the National Theatre, Washington, D.C., in October 2017 and opened on Broadway in April 2018 at the August Wilson Theatre.