Not a Pretty Picture

Not a Pretty Picture is an American docudrama film released in 1976. The film was written, produced and directed by Martha Coolidge, marking her narrative feature film directorial debut, after years of working as a documentary filmmaker in the early to mid-1970s.

The film is a retelling about Coolidge, who was date raped when she was sixteen years old. [1] [2] The film follows the aftermath of the incident on the main character. 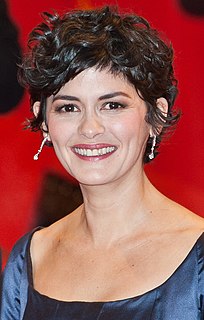 Audrey Justine Tautou is a French actress. Signed by an agent at age 17, she made her acting debut at 18 on television and her feature film debut the following year in Venus Beauty Institute (1999), for which she received critical acclaim and won the César Award for Most Promising Actress. 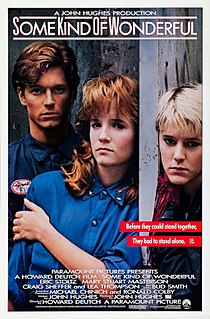 Martha Raye and nicknamed The Big Mouth, was an American comic actress and singer who performed in movies, and later on television. She also acted in plays, including Broadway. She was honored in 1969 at the Academy Awards as the Jean Hersholt Humanitarian Award recipient for her volunteer efforts and services to the troops. 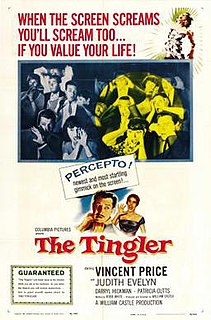 The Tingler is a 1959 American horror film produced and directed by William Castle. It is the third of five collaborations between Castle and writer Robb White, and stars Vincent Price, Darryl Hickman, Patricia Cutts, Pamela Lincoln, Philip Coolidge, and Judith Evelyn.

Jennifer Audrey Coolidge is an American actress, comedian, and activist. She is best known for playing Jeanine Stifler in the American Pie franchise (1999–2012), Paulette Bonafonté Parcelle in the Legally Blonde franchise (2001–2003), and as Fiona in the romantic comedy A Cinderella Story (2004). Coolidge is also a regular actor in Christopher Guest's mockumentary films, such as Best in Show (2000), A Mighty Wind (2003), For Your Consideration (2006), and Mascots (2016).

The Strange Love of Martha Ivers is a 1946 American film noir drama directed by Lewis Milestone from a screenplay written by Robert Rossen, based on the short story "Love Lies Bleeding" by playwright John "Jack" Patrick. Produced by Hal B. Wallis, the film stars Barbara Stanwyck, Van Heflin, Lizabeth Scott and features Kirk Douglas in his film debut. 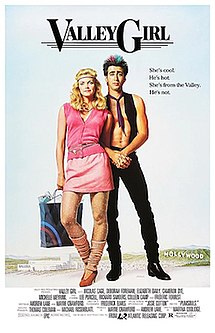 Marjorie Wallace is an American actress, TV Host, model and beauty queen. In 1973, she made history as the first woman from the United States to be crowned Miss World, but just 104 days later, pageant officials announced she would be the first Miss World to have her title taken from her. Years later, she helped launch the television program Entertainment Tonight as an original co-host. 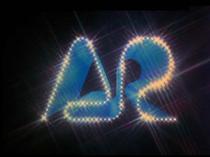 Arthur William Coolidge was a Massachusetts politician who served multiple positions within the state government. 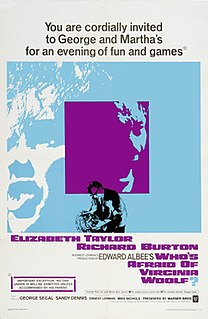 Who's Afraid of Virginia Woolf? is a 1966 American black comedy-drama film directed by Mike Nichols in his directorial debut. The screenplay by Ernest Lehman is an adaptation of the 1962 play of the same name by Edward Albee. The film stars Elizabeth Taylor as Martha and Richard Burton as George, with George Segal as Nick and Sandy Dennis as Honey. 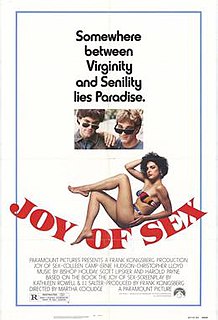 City Girl is a 1984 film directed by Martha Coolidge. The film was produced in 1982, although it did not receive distribution until Coolidge's 1983 film Valley Girl became a surprise success.

Joshua is a 1976 American film directed by Larry G. Spangler.

Dorcas Wright "Dede" Gardner is an American film producer and the president of Plan B Entertainment. She is a two-time Oscar winner for 12 Years a Slave and Moonlight. Her films, Selma, The Tree of Life, The Big Short, and Vice were additionally nominated for the Academy Award for Best Picture.

Sex in a Cold Climate is a 1998 Irish documentary film detailing the mistreatment of "fallen women" in the Magdalene laundries in Ireland. It was produced and directed by Steve Humphries and narrated by Dervla Kirwan. It was used as a source for the 2002 film, The Magdalene Sisters. 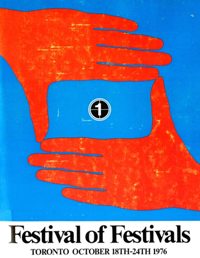 The 1st Toronto International Film Festival (TIFF) took place at Windsor Arms Hotel, Toronto, Ontario, Canada between October 18 and October 24, 1976. Initially its name was Festival of Festivals, which remained until 1994 after which it became the Toronto International Film Festival. It showcased 127 feature films from 30 different countries with the audience of 35,000. It featured some of the best films from film festivals around the world. Most of the Hollywood studios later withdrew their submissions citing reason that Toronto audiences would be too parochial for their films. Cousin Cousine, a French film directed by Jean-Charles Tacchella was selected as the opening film and screened at Ontario Place Cinesphere and Queen of the Gypsies was the closing film. German cinema was focused upon, with films from German directors such as Rainer Werner Fassbinder, Wim Wenders and Werner Herzog.