Lost in Yonkers is a 1993 American film adaptation of Neil Simon's 1991 Pulitzer Prize-winning play of the same name, directed by Martha Coolidge. It stars Irene Worth, Mercedes Ruehl, and Richard Dreyfuss. It was the first theatrical feature film to be edited on Avid Media Composer.

In 1942, following the death of their mother, 15-year-old Jay Kurnitz and his 13-year-old brother Arty move from the Bronx to Yonkers to live temporarily with their strict, stern Grandma Kurnitz and her daughter Aunt Bella, so that their father Eddie can take a traveling sales job and pay off his late wife's medical debt. Grandma's harsh upbringing of her own children has estranged all of them but Bella, who has the mind and emotions of a child despite being in her late 30s. Grandma, whom Eddie has avoided visiting and who did not get along with his now-deceased wife, at first refuses to take in the boys, but Bella is happy to see them and uncharacteristically stands up to Grandma, threatening to move out into "the home" for those with mental conditions and leave Grandma all alone if she doesn't let the boys stay.

Jay and Arty do not enjoy living under Grandma's strict rules. Upon learning from Bella that Grandma has hidden $15,000 somewhere in the house and attached candy store, the boys try to find it so they can pay off their father's debt and he can return home. Meanwhile, the boys' Uncle Louie, a mobster, returns to his mother's house to hide from another mobster, Hollywood Harry, who is stalking him hoping to get what Louie has in a black bag. Louie responded to Grandma's harsh upbringing by becoming tough and independent, and starting a life of thievery and crime at a young age. Louie encourages the boys to have similar "moxie", but also reveals to them that Grandma herself was traumatized at age 12, when she saw police kill her father and was herself permanently disabled in the ensuing riot. As a result, Grandma believes people must be "like steel" in order to simply survive.

Bella has fallen in love with Johnny, the head usher at the local movie house, who like her is mentally slow and lives with his parents. Bella and Johnny plan to get married and open their own restaurant, for which they need $5000, which Bella hopes to convince Grandma to give her. After agonizing about how to discuss this with Grandma, Bella announces it at a family dinner attended by Louie and their sister Gert, whose fear of Grandma caused her to develop a speech impediment. Grandma disapproves of the match, causing Bella to break down crying and leave the house, moving in with Gert. That night, Jay helps Louie steal Hollywood Harry's car and escape with the black bag. Louie later calls Bella to tell her he's now the "richest guy in Guadalcanal."

Bella now has $5000 (later revealed to have been given to her by Louie) but discovers that Johnny is too afraid to marry her or open a restaurant. She returns to Grandma's house where they have an emotional confrontation. Grandma's stern harshness is shown to be her reaction to not only her own childhood trauma, but also grief from the deaths of her husband and two of her children at young ages. Bella agrees to move back in with Grandma on the condition that Bella will lead a more independent life. Eddie returns from his business travels and reclaims his sons, who leave Grandma a loving farewell card. In the final scene of the film (which implies, but does not explicitly show, Grandma's death), Bella leaves Yonkers for good and sends Eddie and the boys a postcard from Florida, where she has gotten a restaurant job.

After eleven previews, the Broadway production, directed by Gene Saks, opened on February 21, 1991, at the Richard Rodgers Theatre, where it ran for 780 performances. The original cast included Jamie Marsh, Irene Worth, Mercedes Ruehl, and Kevin Spacey.

Roger Ebert gave the film three stars out of four and wrote, "All of the performances are good, but one of them, by Mercedes Ruehl, casts a glow over the entire film." [4] Gene Siskel of the Chicago Tribune awarded two-and-a-half stars out of four and wrote, "A wonderful play about a classically unhappy household that has been turned into a typical, mechanical Neil Simon joke machine. Simon's stage words rarely transfer well to the more realistic arena of film, and this is no exception. Another liability is that Richard Dreyfuss hams his way through a role that was played with dignity and poignancy on stage by Kevin Spacey." [5] Janet Maslin of The New York Times described the film as "sometimes more picturesque than powerful. But it conveys all the warmth and color of the original material." [6] Todd McCarthy of Variety wrote "Story of a domineering old woman's tyranny over two generations of offspring is adroitly structured and contains strong human elements, but what proved so affecting onstage seems a bit pat and calculated when viewed in closeup." [7] Peter Rainer of the Los Angeles Times described the film as "essentially deep-dish Neil Simon, which is, after all, not so very deep. But neither is the play negligible; it has a felt, melancholy undertow, and Ruehl and Worth, who both won Tonys for their performances on Broadway, bring out its full, racking sadness." [8] Peter Travers of Rolling Stone wrote "In the film version, with Ruehl and Worth repeating their Tony-winning roles, Simon intensifies the barrage of belly laughs and bathos. Director Martha Coolidge, whose Rambling Rose was a model of graceful literary adaptation, seems at a loss with the crass material." [9] 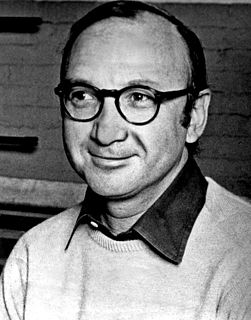 Marvin Neil Simon was an American playwright, screenwriter and author. He wrote more than 30 plays and nearly the same number of movie screenplays, mostly adaptations of his plays. He has received more combined Oscar and Tony Award nominations than any other writer. 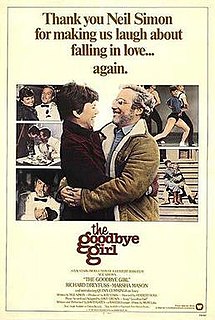 The Goodbye Girl is a 1977 American romantic comedy-drama film produced by Ray Stark, directed by Herbert Ross and starring Richard Dreyfuss, Marsha Mason, Quinn Cummings and Paul Benedict. The original screenplay by Neil Simon centers on an odd trio: a struggling actor who has sublet a Manhattan apartment from a friend, the current occupant, and her precocious young daughter. 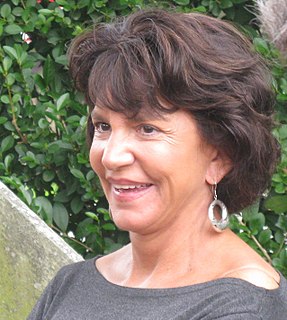 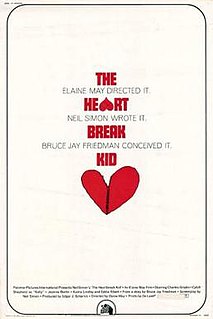 The Heartbreak Kid is a 1972 romantic comedy film directed by Elaine May and written by Neil Simon, starring Charles Grodin, Cybill Shepherd, Jeannie Berlin, Audra Lindley, Eddie Albert, and Doris Roberts. It is based on the short story "A Change of Plan", written by Bruce Jay Friedman and first published in Esquire magazine in 1966. 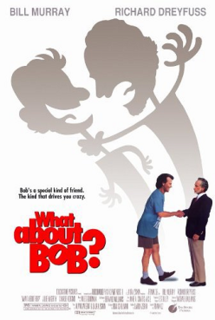 What About Bob? is a 1991 American comedy film directed by Frank Oz and starring Bill Murray and Richard Dreyfuss. Murray plays Bob Wiley, an irritating patient who follows his egotistical psychiatrist Dr. Leo Marvin (Dreyfuss) on vacation. When the unstable Bob befriends the other members of Dr. Leo's family, it pushes the doctor over the edge. 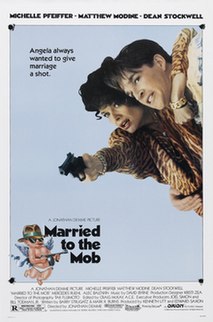 Married to the Mob is a 1988 American comedy film directed by Jonathan Demme, starring Michelle Pfeiffer and Matthew Modine. 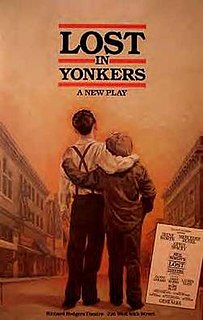 Lost in Yonkers is a play by Neil Simon. The play won the 1991 Pulitzer Prize for Drama. 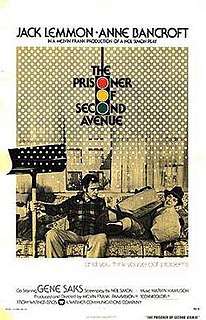 The Prisoner of Second Avenue is a 1975 American black comedy film directed and produced by Melvin Frank and starring Jack Lemmon and Anne Bancroft. The film was adapted from the 1971 play by Neil Simon. 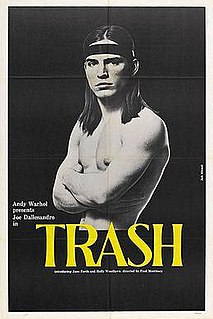 Trash is a 1970 American drama film directed and written by Paul Morrissey and starring Joe Dallesandro, Holly Woodlawn and Jane Forth. Dallesandro had previously starred in several other Andy Warhol/Paul Morrissey films such as The Loves of Ondine, Lonesome Cowboys, San Diego Surf, and Flesh. Dallesandro was Morrissey's preferred leading man.

Another You is a 1991 American comedy film directed by Maurice Phillips and starring Richard Pryor, Gene Wilder, Mercedes Ruehl, Vanessa Williams and Kevin Pollak. The film was released in the United States on July 26, 1991. 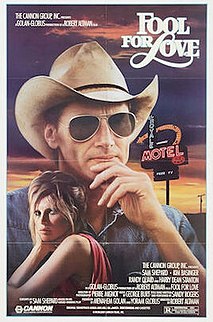 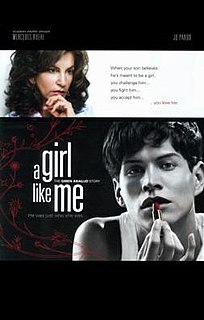 A Girl Like Me: The Gwen Araujo Story is a 2006 American biographical drama television film directed by Agnieszka Holland and starring J. D. Pardo, Mercedes Ruehl, and Avan Jogia. It premiered on Lifetime in the United States on June 19, 2006. The film dramatizes the events surrounding the 2002 murder of Gwen Araujo, a transgender teenager who was murdered after acquaintances discovered that she had external genitalia. 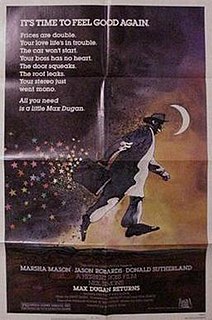 Max Dugan Returns is a 1983 American comedy-drama film starring Jason Robards as Max Dugan, Marsha Mason as his daughter Nora, Matthew Broderick as Nora’s son Michael, and Donald Sutherland. Both Matthew Broderick and Kiefer Sutherland (cameo) are featured in their first film appearance. This would be the last of seven Neil Simon-based films to be directed by Herbert Ross, as well as the last of his films starring Mason. 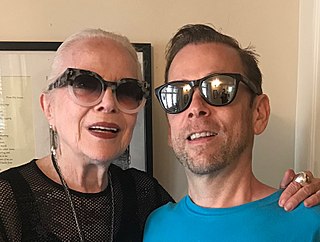 Jamie Marsh is an American theatre, television and film actor.

Danny Gerard is an American actor and musician. 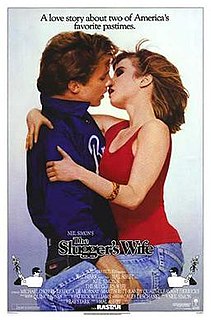 The Slugger's Wife is a 1985 romantic comedy film about a baseball star who falls for a singer. Written by Neil Simon, directed by Hal Ashby and produced by Ray Stark, the film stars Michael O'Keefe, Rebecca De Mornay, and Randy Quaid. It was distributed by Columbia Pictures and released on March 29, 1985. 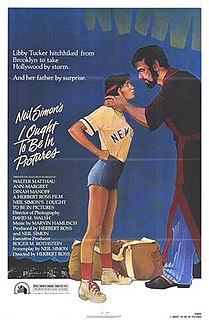 Neil Simon's I Ought to Be in Pictures is a 1982 American comedy-drama film directed by Herbert Ross and based on Neil Simon's 1980 play of the same name. The film stars Walter Matthau, Ann-Margret, and Dinah Manoff. Other actors who have supporting roles are Lance Guest, Eugene Butler, David Faustino, Martin Ferrero and Michael Dudikoff.