Introduced in the coupe body style, the M6 was also built in convertible and fastback sedan ('Gran Coupe') body styles for later generations. An M6 model was built for each of the first three generations of the 6 Series. [1] Production of the M6 ended in 2018 and it was replaced by the BMW M8 (F91/F92/F93) in 2019. [2]

The M6 lineage began in 1983 with the M635CSi model of the E24 6 Series range, which was powered by the M88/3 DOHC straight-six engine (which was a modified version of the engine used in the BMW M1 supercar). In most countries, the model was badged the M635CSi, however the equivalent model in North America and Japan was simply badged in "M6". [3]

The E24 series became a "world car" for the 1988 and 1989 model years, sporting the same bumpers and aerodynamic treatments as its high-performance counterparts across all markets. Production of the E24 M635CSi/M6 ended in 1989.

The M6 was produced as both a coupé (E63 model code) and a convertible (E64 model code). The exterior styling was overseen by Karl Elmitt. [16] With the 2014 Competition Package, the M6 comes with a sportier exhaust system with black tips, stiffer springs, dampers, and anti-roll bars, steering is more direct than the base M6, the twin-turbocharged V8 engine utilised in the M6 is updated and is rated at 423 kW (567 hp) and 680 N⋅m (502 lb⋅ft) of torque. This results in a 0 to 100 km/h (62 mph) acceleration time of 3.9 seconds for the coupe and Gran Coupe versions. [30]

Around the start of 2015, BMW Motorsport began developing a replacement for the successful BMW Z4 GT3 which already had been in action since 2010, where they selected the M6 as the base model. Throughout the year, the factory engineered the M6 to match FIA GT3 specifications. Emphasis was placed on safety with BMW Motorsport producing an "FIA-approved safety cell in accordance with the very latest safety standards". Unlike the Z4 GT3, which used an engine derived from the BMW M3, the engine of the M6 GT3 was virtually unchanged from that of the production model of the M6 (and the BMW M5). The engine only faced some modifications for use in motorsport. In May 2015, at Dingolfing, BMW works driver Jörg Müller drove the M6 GT3 on its first roll-out to contribute a milestone to its development, and later the M6 GT3 was revealed near the end of the year.

The M6 GT3 showed its success on its debut year in 2016 when Rowe Racing clinched overall victory at the 2016 Spa 24 Hours with BMW works drivers Philipp Eng, Maxime Martin, and Alexander Sims at the wheel. The car also saw success in championships around the world, with wins in the VLN, Italian GT Championship, and Super GT Championship.

The BMW M6 GTLM is the racing version of the M6 created to participate in the IMSA WeatherTech SportsCar Championship and intended to replace the BMW Z4 GTE. The cars are entered by BMW Team RLL, debuting in 2016, with no wins in its debut season. The car would earn four class wins during the 2017 season before being replaced by the BMW M8 GTE for 2018. 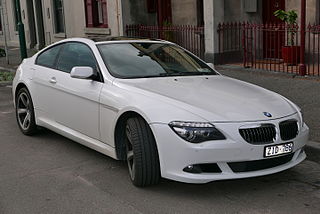 The second generation of the BMW 6 Series consists of the BMW E63 and BMW E64 grand tourers. The E63/E64 generation was produced by BMW from 2003 to 2010 and is often collectively referred to as the E63. 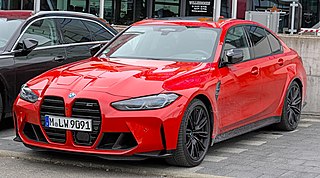 The BMW M5 is a high performance variant of the BMW 5 Series marketed under the BMW M sub-brand. It is considered an iconic vehicle in the sports sedan category. The majority of M5s have been produced in the sedan (saloon) body style, but in some countries the M5 was also available as a wagon (estate) from 1992 to 1995 and from 2006 to 2010.

Alpina Burkard Bovensiepen GmbH & Co. KG is an automobile manufacturing company based in Buchloe, in the Ostallgäu district of Bavaria, Germany that develops and sells high-performance versions of BMW and Mini cars. 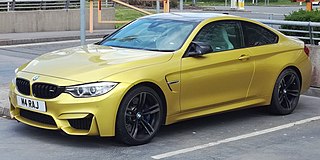 The BMW M4 is a high-performance version of the BMW 4 Series coupes and convertibles developed by BMW's motorsport division, BMW M.

The BMW M8 is the high performance version of the BMW 8 Series (G15) marketed under the BMW M sub-brand. 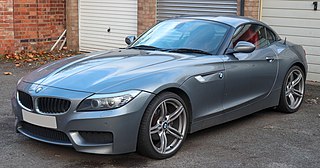 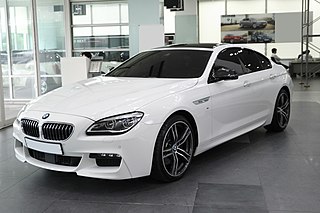 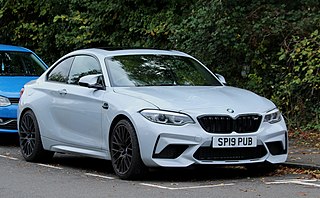 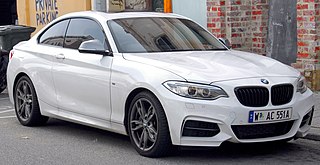 The McLaren 650S is a British sports car designed and manufactured by British automobile manufacturer McLaren Automotive. It was announced in February 2014 as a new model, but based on the existing MP4-12C with 25% new parts, and was formally unveiled at the 2014 Geneva Motor Show.

The McLaren 570S is a sports car designed and manufactured by British car manufacturer McLaren Automotive. It was unveiled at the 2015 New York International Auto Show.

The BMW E31 is the first generation of the BMW 8 Series. It is a grand tourer built by BMW from 1990 to 1999 powered by either a V8 or V12 engine. While it did supplant the original E24 based 6 Series in 1990, a common misconception is that the 8 Series was developed as a successor. It was actually in an entirely new model class aimed at a different market, with a substantially higher price and performance than the 6 Series.

The G32 BMW 6 Series is the fourth generation of the BMW Gran Turismo range of fastback mid-size luxury cars, and was launched in 2017 as the successor to the BMW 5 Series Gran Turismo.

The second-generation of the BMW 8 Series consists of the BMW G14, BMW G15 grand tourers and BMW G16 executive car. The G14/G15/G16 generation has been in production since 2018, and is often collectively referred to as the G15.

The Alpina B6 (F12) is the third generation of the high performance grand tourer manufactured by German automobile manufacturer Alpina. Introduced at the 2011 Tokyo Motor Show, the B6 was based on the BMW 6 Series and was available in coupé and convertible body styles, with the latter being introduced at the 2011 Frankfurt Motor Show. A third saloon bodystyle called the gran coupé was introduced in 2014.

The second generation of the BMW 4 Series consists of the BMW G22 along with the BMW G23 and BMW G26 compact executive cars. The G22 4 Series was launched in June 2020 and succeeds the F32 4 Series.