Last updated September 07, 2020
This article is about a film. For the real life events on which the film is based, see Rescue of Bat 21 Bravo.
1988 film directed by Peter Markle

Bat*21 is a 1988 American war film directed by Peter Markle, and adapted from the book by William C. Anderson, novelist and retired United States Air Force colonel. [2] [Note 1] Set during the Vietnam War, the film is a dramatization based upon the rescue of a U.S. air navigator shot down behind enemy lines in Vietnam. The film stars Gene Hackman and Danny Glover with Jerry Reed, David Marshall Grant, Clayton Rohner, Erich Anderson and Joe Dorsey in supporting roles.

During the last days of the Vietnam War, USAF Lieutenant colonel Iceal E. "Gene" Hambleton (Gene Hackman) call sign BAT-21 Bravo, is flying on board an EB-66C electronic warfare aircraft, engaged in electronic countermeasures preparatory to a major bombing strike. Without warning, a number of SA-2 Guideline SAMs are launched from North Vietnam, targeting their aircraft. A massive SAM explosion tears off the tail and Hambleton, in the navigator's position, ejects as the sole survivor of the six-man crew.

While still coming down by parachute, Hambleton makes radio contact with Captain Bartholomew "Birddog" Clark (Danny Glover), the pilot of a Cessna O-2 Skymaster, flying a forward air control mission near where the EB-66 was destroyed. Birddog becomes Hambleton's link to rescue.

Hambleton, an expert on electronic weapons systems and who holds valuable information, is known to the North Vietnamese, who begin an all-out search, attempting to capture him. An effort to steal supplies from Vietnamese villagers is not successful, as Hambleton is discovered and kills an aggressive peasant farmer, apologizing to his grieving family as he escapes.

Knowing that his current location is too dangerous for rescue aircraft, Hambleton devises a plan to reach safer territory. He plots a course to the river which is the boundary of the target area, then communicates his intended path to Clark in a code composed of various golf courses he knows well. This will allow the rescuers to keep track of his progress, making it easier for them to pick him up.

Several attempts are made to recover Hambleton. Two helicopters are lost and members of its crews are killed or captured. Clark ultimately flies a "Huey" helicopter rescue mission, but as he retrieves Hambleton, the pair are shot down by ground fire, with Clark being wounded. An F-100 bombing raid both assists and hinders their progress through the jungle, as North Vietnamese irregulars are trailing them. In the end, Hambleton and Clark are rescued by a US river boat patrolling nearby on the Cam Lo River.

Portions of Bat*21 were highly dramatized, including the climactic battle. Some characters were composites of real people, while others were created for the film. However, some other details were accurate, including that rescuer Captain Larry Potts was African American. [3]

The actual rescue took over 11 days, during which a major attack was delayed, resulting in numerous South Vietnamese soldiers being killed and wounded. A Forward Air Observer aircraft was shot down and USAF 1Lt Bruce Walker and USMC 1Lt Larry Potts parachuted to the ground safely, eluding capture. In an ensuing attack, six more Americans lost their lives attempting to rescue him. The North Vietnamese, alerted by the intense efforts to find the flyer, increased their efforts to find Hambleton. Walker was discovered and killed by the Vietnamese forces. During a nighttime, covert operation from more than 2 miles (3.2 km) behind enemy lines, Hambleton was finally rescued in a land operation by U.S. Navy SEAL Lt. j.g Thomas R. Norris and VNN Petty Officer Third Class Nguyen Van Kiet. [4]

Bat*21 was filmed entirely on location in Sabah, Malaysia, with the assistance of the Malaysian government. Resources, locations and other assistance were supplied by the Malaysian Army and the Royal Malaysian Air Force, which also supplied aircraft and pilots, including the services of Captain V. Thiagarajah, who flew both on- and off-camera. [5]

Film historian Alun Evans in Brassey's Guide to War Films, considered the production an unusual look at "... the perspective of a service non-combatant." [7] In a contemporary review, Roger Ebert noted: "'BAT*21' is the kind of lean, no-nonsense war film Hollywood used to make back before the subject became burdened with metaphysical insights." [8] Listed in the "best" category of "The Best (and Worst) War Movies of All Time", Popular Mechanics , characterized Bat*21 as the "Best Vietnam War Movie." [9] 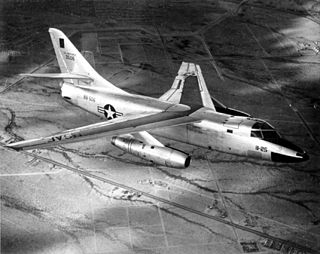 The Douglas B-66 Destroyer is a light bomber that was designed and produced by the American aviation manufacturer Douglas Aircraft Company.

We Were Soldiers is a 2002 American war film directed by Randall Wallace and starring Mel Gibson. Based on the book We Were Soldiers Once… and Young (1992) by Lieutenant General (Ret.) Hal Moore and reporter Joseph L. Galloway, it dramatizes the Battle of Ia Drang on November 14, 1965. 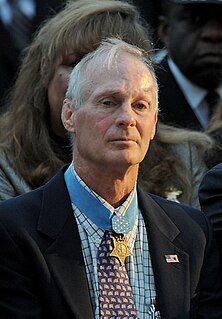 Thomas Rolland Norris is a retired United States Navy SEAL and Distinguished Eagle Scout who received the Medal of Honor for his ground rescue with the assistance of Petty Officer Third Class Nguyen Van Kiet of two downed aircrew members in Quang Tri Province, Vietnam on April 10–13, 1972. At the time of the action, Lieutenant Norris was a SEAL Advisor with the Strategic Technical Directorate Assistance Team. Norris was one of three SEALs to receive the Medal of Honor for actions during the Vietnam War.

Nguyễn Văn Kiệt is a former petty officer third class in the Republic of Vietnam Navy and, alongside Trần Văn Bảy, one of only two South Vietnamese and the only South Vietnamese Navy member to be awarded the United States Navy Cross for actions during the Vietnam War. 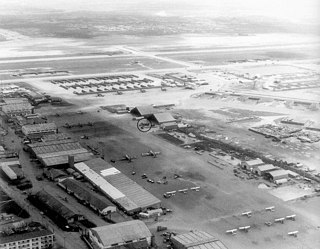 Bien Hoa Air Base is a Vietnam People's Air Force military airfield located in South-Central southern Vietnam about 25 km (16 mi) from Ho Chi Minh City, across the Dong Nai river in the northern ward of Tân Phong, and within the city of Biên Hòa within Đồng Nai Province. The boomburb city is densely populated and rings the base, despite the astronomical level of agent orange toxins simply left there for decades. The base is scheduled to begin cleanup by 2019. 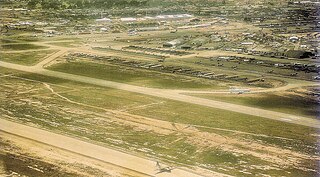 Tan Son Nhut Air Base (1955–1975) was a Republic of Vietnam Air Force (RVNAF) facility. It was located near the city of Saigon in southern Vietnam. The United States used it as a major base during the Vietnam War (1959–1975), stationing Army, Air Force, Navy, and Marine units there. Following the Fall of Saigon, it was taken over as a Vietnam People's Air Force (VPAF) facility and remains in use today.

Joe Madison Jackson served as a career officer in the United States Air Force and received the Medal of Honor for heroism above and beyond the call of duty during the Vietnam War. On 12 May 1968, he volunteered for a dangerous impromptu rescue of three remaining Air Force members trapped at an overrun Army Special Forces camp. While the camp was still under heavy enemy fire from North Vietnamese and Viet Cong troops, he skillfully piloted his C-123 cargo plane and rescued the three men. 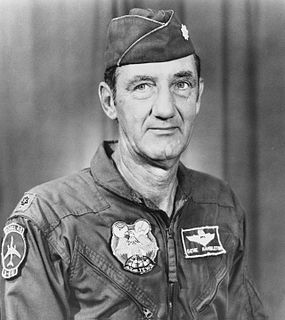 Iceal E. "Gene" Hambleton was a United States Air Force navigator and electronic warfare officer who was shot down over South Vietnam during the 1972 Easter Offensive. He was aboard an EB-66 aircraft whose call sign was Bat 21. As the ranking navigator/EWO on the aircraft, he was seated immediately behind the pilot, giving him the call sign "Bat 21 Bravo". He survived for ​11 1⁄2 days behind enemy lines until he was retrieved in a ground operation. His rescue was the longest and most costly search and rescue mission during the Vietnam War. He received the Silver Star, the Distinguished Flying Cross, the Air Medal, the Meritorious Service Medal and a Purple Heart during his career. 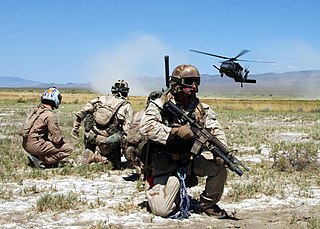 The 37th Aerospace Rescue and Recovery Squadron was a rescue squadron of the USAF active during the Vietnam War.

The rescue of Bat 21 Bravo, the call sign for Iceal "Gene" Hambleton, a navigator aboard an EB-66 aircraft shot down behind North Vietnamese lines, was the "largest, longest, and most complex search-and-rescue" operation during the Vietnam War. Five additional aircraft were shot down during rescue attempts, directly resulting in the deaths of 11 airmen, the capture of two others, and another airman trying to evade capture.

The Action of 23 August 1967 was a major air battle which involved elements of the Vietnam People's Air Force (VPAF) and the United States Air Force (USAF). The air battle took place over the skies of North Vietnam as part of Operation Rolling Thunder, during the Vietnam War. 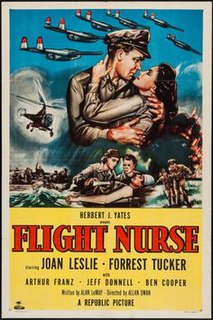 Flight Nurse is a 1953 American drama war film directed by Allan Dwan and stars Joan Leslie and Forrest Tucker. The film is largely based on the life of Lillian Kinkella Keil, one of the most decorated women in American military history. Flight Nurse begins with the dedication: "This picture is respectfully dedicated to that brave legion of military nurses who are serving with the armed forces of free nations all over the world. These angels of mercy – shoulder to shoulder, share the danger and hardships of free fighting men everywhere, with devotion above and beyond the call of duty."

James C. Harding is a retired United States Air Force colonel and pilot. He served two tours, during the Vietnam War and flew a total 596 missions, all in propeller aircraft.