The Staatsoper Berlin (English: Berlin State Opera) is a listed building on Unter den Linden boulevard in the historic center of Berlin. It was erected by order of Frederick the Great from 1741 to 1743 according to plans by Georg Wenzeslaus von Knobelsdorff in Palladian style. Damaged during the Allied bombing in World War II, the former Royal Prussian Opera House was rebuilt from 1951 to 1955 as part of the Forum Fridericianum square. Nicknamed Lindenoper, it is "the first theater anywhere to be, by itself, a prominent, freestanding monumental building in a city." [1]

King Frederick II of Prussia shortly after his accession to the throne commissioned the original building on the site. Construction work began in July 1741 with what was designed by Georg Wenzeslaus von Knobelsdorff to be the first part of a "Forum Fredericianum" on present-day Bebelplatz. Although not entirely completed, the Court Opera (Hofoper) was inaugurated with a performance of Carl Heinrich Graun's Cesare e Cleopatra on December 7, 1742. This event marked the beginning of the successful, 250-year co-operation between the Staatsoper and the Staatskapelle Berlin, the state orchestra, whose roots trace back to the 16th century.

In 1821, the Berlin Opera—hosted at the Schauspielhaus Berlin—gave the premiere of Weber's Der Freischütz . In 1842, Wilhelm Taubert instituted the tradition of regular symphonic concerts. In the same year, Giacomo Meyerbeer succeeded Gaspare Spontini as General Music Director. Felix Mendelssohn also conducted symphonic concerts for a year.

On August 18, 1843 the Linden Opera was destroyed by fire. The reconstruction of the building was supervised by architect Carl Ferdinand Langhans, and the Königliches Opernhaus (Royal Opera House) was inaugurated the following autumn by a performance of Meyerbeer's Ein Feldlager in Schlesien . In 1849, Otto Nicolai's Die lustigen Weiber von Windsor was premiered at the Royal Opera House, conducted by the composer.

At the end of the 19th century and the beginning of the 20th century, the Royal Court Opera, Berlin, attracted many illustrious conductors. They included Felix von Weingartner, Karl Muck, Richard Strauss, and Leo Blech. After the collapse of the German Empire in 1918, the Opera was renamed Staatsoper unter den Linden and the Königliche Kapelle became Kapelle der Staatsoper.

In the 1920s, Kurt Adler, Wilhelm Furtwängler, Erich Kleiber, Otto Klemperer, Alexander von Zemlinsky, Bruno Walter occupied the conductor's post. In 1925, Alban Berg's Wozzeck , was given its premiere in a production conducted by Erich Kleiber in the composer's presence.

After having undergone an extensive renovation, the Linden Opera reopened on 28 April 1928 with a new production of Mozart's Die Zauberflöte . The cast included Delia Reinhardt, Richard Tauber, Friedrich Schorr and Leo Schützendorf, conducted by Erich Kleiber. The same year, the famous Russian bass Feodor Chaliapin and Serge Diaghilev's Ballets Russes with conductor Ernest Ansermet were guest performers. In 1930 Erich Kleiber conducted the premiere of Darius Milhaud's Christophe Colomb . However, in 1934, when symphonic pieces from Alban Berg's Lulu were performed by Kleiber, the National Socialists provoked a scandal and the conductor was forced into exile.

After Hitler's Nazi takeover, members of Jewish origin were dismissed from the ensemble. Many German musicians associated with the opera went into exile, including the conductors Kurt Adler, Otto Klemperer and Fritz Busch. Clemens Krauss became a prominent German conductor first at the Berlin State Opera in 1933 and was then appointed as its director in 1935 due to Fritz Busch and Erich Kleiber resigning, respectively, their positions in protest over Nazi rule. During the Third Reich, Robert Heger, Herbert von Karajan (1939–1945) and Johannes Schüler were the "Staatskapellmeister".

The second rebuilding took a long time. From 1945, the opera company performed at the Admiralspalast. From 1949, the company served as the state opera of East Germany. It moved back to its original home after the rebuilding in freely adapted baroque forms was finally completed in 1955. The newly rebuilt opera house was opened, again, with Wagner's Die Meistersinger von Nürnberg. The capacity is now about 1,300. After the Berlin Wall was built in 1961, the Opera was somewhat isolated, but still maintained a comprehensive repertoire that featured the classic and romantic period together with contemporary ballet and operas.

After reunification, the Linden Opera rejoined the operatic world. Important works that had already performed in the past were rediscovered and discussed anew within the framework of a "Berlin Dramaturgy". Baroque Opera in particular was at the center of attention, with Graun's Cleopatra e Cesare, Keiser's Croesus , Florian Leopold Gassmann's L'opera seria and Scarlatti's Griselda . These works were performed by Belgian conductor René Jacobs together with the Akademie für Alte Musik Berlin and the Freiburger Barockorchester on period instruments. In the 1990s, the opera was officially renamed Staatsoper Unter den Linden.

In 1992, the Argentine-Israeli conductor Daniel Barenboim was appointed Music Director. In 2000, the orchestra (according to its official website) elected Barenboim "conductor for life." During the 2002 Festtage, he led a Wagner cycle in ten parts, a production created in collaboration with director Harry Kupfer.

In 2009, the Berlin State Opera was closed for considerable renovation work led by German architect HG Merz. The roof of the opera building was raised and the proscenium prolonged to improve the acoustics. Other renovation and extension efforts included the director's building, the below-ground connection building and the depot building. The latter will house the new rehearsal center.

The house was reopened in 2017 with premieres of Humperdinck's Hänsel und Gretel and Monteverdi's L'incoronazione di Poppea on one weekend. [3] The opera house also hosts the Staatskapelle Berlin orchestra.

The Berlin Philharmonic is a German orchestra based in Berlin which is consistently ranked in the top handful of orchestras in the world, distinguished amongst peers for its virtuosity and compelling sound. The orchestra's history has always been tied to its chief conductors, many of whom have been authoritative and controversial, such as Wilhelm Furtwängler and Herbert von Karajan. 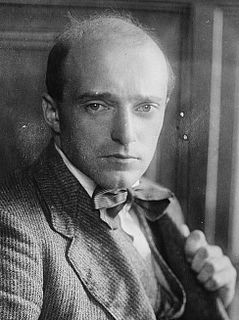 Erich Kleiber was an Austrian, later Argentine, conductor, known for his interpretations of the classics and as an advocate of new music. 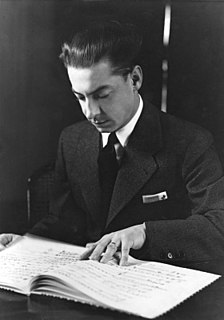 Herbert von Karajan was an Austrian conductor. He was principal conductor of the Berlin Philharmonic for 34 years until his death in 1989. During the Nazi era, he debuted at the Salzburg festival, with the Vienna Philharmonic, the Berlin Philharmonic, and during the Second World War he conducted at the Berlin State Opera. Generally regarded as one of the greatest conductors of the 20th century, he was a controversial but dominant figure in European classical music from the mid-1950s until his death. Part of the reason for this was the large number of recordings he made and their prominence during his lifetime. By one estimate he was the top-selling classical music recording artist of all time, having sold an estimated 200 million records.

The Kroll Opera House was an opera building in Berlin, Germany, located in the central Tiergarten district on the western edge of the Königsplatz square, facing the Reichstag building. It was built in 1844 as an entertainment venue for the restaurant owner Joseph Kroll. During its eventful history it was redeveloped as an opera house in 1851 and was used by various owners and directors for opera, operetta and drama. It was later operated by the Prussian state opera and drama companies and served as the assembly hall of the German Reichstag parliament from 1933 until 1942. On 19 July 1940, the opera house was used to host the 1940 Field Marshal Ceremony. Severely damaged by bombing and the Battle of Berlin in World War II, it was finally demolished in 1951.

Leo Blech was a German opera composer and conductor who is perhaps most famous for his work at the Königliches Opernhaus from 1906 to 1937, and later as the conductor of Berlin's Städtische Oper from 1949 to 1953. Blech was known for his reliable, clear, and elegant performances, especially of works by Wagner, Verdi, and Bizet's Carmen, and for his sensitivity as an accompanist.

Otto Gerdes was a German conductor and record producer.

Berlin Opera may refer to:

Diego Fasolis is a Swiss classical organist and conductor, the leader of the ensemble I Barocchisti. He has conducted operas in historically informed performance at major European opera houses and festivals, and has made award-winning recordings.