Bloodshot Records is an independent record label based in Chicago, Illinois that specializes in roots-infused indie rock, punk rock, and alternative country. [1] [2]

Bloodshot Records was founded in 1993 by Nan Warshaw, [3] Rob Miller, [4] and Eric Babcock. [5] [6] Warshaw and Miller met in 1992 when they bonded over a passion for country music and began to regularly deejay [7] on Wednesday country nights at a Chicago bar called Crash Palace, now called Delilah's. [8] Both Warshaw and Miller had played in bands, had deejayed at their local college radio stations, and had worked in different areas of the music business. Warshaw had booked tours for bands she was friends with and had worked as a publicist for the band Killbilly who released a record on Flying Fish Records, where co-founder Babcock worked. [8] Active in what was then a burgeoning underground country-roots music scene in Chicago, Warshaw and Miller made a wishlist of unheralded bands and musicians they loved on a cocktail napkin while having drinks at a bar. [9]

That cocktail napkin list eventually became the label's first release, a 1994 compilation called For A Life of Sin: A Compilation of Insurgent Chicago Country that Warshaw, Miller and Babcock self-funded. [10] [11] The album, which documented the Chicago music scene Warshaw and Miller saw at the time, included artists such as The Bottle Rockets and Robbie Fulks as well as long-time local Chicago band, The Sundowners. [6] Using the compilation format, Bloodshot organized record release shows in multiple cities with four or five bands on each night's line up, which allowed a wide press presence for the small label, where the bands could sell what turned out to be some of the bands' first records at the multi-band lineup shows. The record was self-distributed and sold on consignment, with enough success that the record was paid for and there was funds to do another compilation. [8]

A year later, in 1995, the label released their second compilation album Hell Bent: Insurgent Country Volume 2. The album included band from all over the country, and Bloodshot continued to put on events showcasing the bands involved with the making of the record. [8] Although well received by critics, Bloodshot had very tight financial constraints, and worked under the model of not starting a new project until the prior project had paid for itself. Also challenging was establishing Bloodshot's brand, a mixture of country, punk, and folk that had no prior precedence. [12] [13] The name of the music genre was a point of contention, with some grouping the unique, hard-to-classify singer-songwriter music under the alternative country and some grouping it under the Americana label. [14]

In 2014, Bloodshot released their 20th anniversary album, While No One Was Looking: Toasting 20 Years of Bloodshot Records. [16] The album is a 2-CD set with 38 artists that include bands like Andrew Bird, Blitzen Trapper, Superchunk and Diarrhea Planet covering songs by some of Bloodshot's stable of artists (i.e., Ryan Adams, Old 97's, Cory Branan, Justin Townes Earle). [17] Bloodshot spent the year celebrating their success at surviving during a period when most independent record labels were going out of business. [8]

While Bloodshot built its catalog of releases of both compilation and records by an ever enlarging roster of artists and bands, the cost of running a record label was very challenging, requiring both Warshaw and Miller to work supplemental jobs to keep afloat. The label was initially run out of Warshaw's basement. When Bloodshot released Ryan Adams' record Heartbreaker, the popularity of the record created a more stable financial base for the label, and allowed Warshaw and Miller to dedicate themselves full-time to running the label, move to a bigger office space in the northwest side of Chicago, and begin to have employees. [1] Singer Kelly Hogan was the first paid employee, working as the label's publicist. [8] The Chicago twang, country, and punk scene, often described as a sort of an anti-Nashville, continued to expand, often led by various projects involving The Mekons' Jon Langford. [18]

Bloodshot has close ties to the Chicago community [19] and particularly to the Hideout. [20]

Since 2002, Bloodshot has put on a free BBQ and music day-long showcase at both Austin, Texas' SXSW and New York City's CMJ music festivals. [21] [22] The annual SXSW BBQs have often been anchored by performances by The Waco Brothers [23]

Some of the early artists who started out on Bloodshot went on to sign with larger major record labels, specifically Old 97's and Ryan Adams. [24] Ryan Adams had one of the label's best selling albums with the 2000 release Heartbreaker , having sold almost 500,000 copies. [9] Neko Case had a licensing deal with Bloodshot Records in the United States and Mint Records in Canada before she signed with ANTI-. [25]

Bloodshot includes a diverse roster of artists. The roster includes Andre Williams, who wrote "Shake a Tail Feather," faced challenges, and then had a career renaissance making records at Bloodshot. [26] Bloodshot includes bands and projects by many members of The Mekons, including Jon Langford, Sally Timms, and Rico Bell.

Co-founder Eric Babcock left Bloodshot Records in 1997. [27] As of early 2019, Warhsaw stepped away from management, leaving Rob Miller as the senior manager. [28] In November 2019, Bloodshot celebrated its 25th anniversary by holding a concert/party and issuing another compilation album. [29]

Bloodshot Records began its life as a label by releasing compilations of tracks not released elsewhere. [30]

Bloodshot Revival/Soundies: A series of historic transcription acetate recordings that were leased to radio stations for airplay but never sold at the time of recording. [32]

Jonathan Denis Langford is a Welsh musician and artist based in Chicago, Illinois, United States. He is one of the founders of punk band The Mekons, post-punk group The Three Johns, and alternative country ensembles The Waco Brothers and Pine Valley Cosmonauts. He has worked to campaign against the death penalty in Illinois.

Nan Warshaw is the Co-Founder of Bloodshot Records, an independent record label based out of Chicago.

Released in 1989, The Mekons Rock 'n Roll is the eighth studio album by English rock band The Mekons. Pitchfork placed the album at number 97 on their list of the Top 100 Albums of the 1980s. In December 2007 the album was ranked number 97 in Blender (magazine)'s 100 Greatest Indie-Rock Albums Ever. Decades later, critics still remembered it fondly. 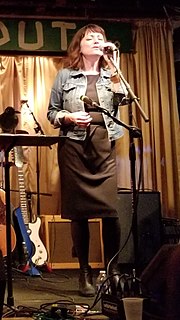 Nora O’Connor is an American, Chicago-based musician. Though primarily known for her vocals, O'Connor also plays guitar and bass. For much of 2013, O'Connor toured internationally as a singer in Iron and Wine. She also records and performs with longtime collaborator, Andrew Bird. O'Connor plays bass and sings back-up for Kelly Hogan and in 2010, Wilco's Jeff Tweedy enlisted O'Connor and Hogan as primary vocalists on gospel legend Mavis Staples’ Grammy Award-winning album You Are Not Alone. In the studio and on the stage, O'Connor has backed Neko Case, Jakob Dylan, The New Pornographers, The Decemberists, Archer Prewitt, John Wesley Harding, Hushdrops, Justin Roberts and Robbie Fulks. 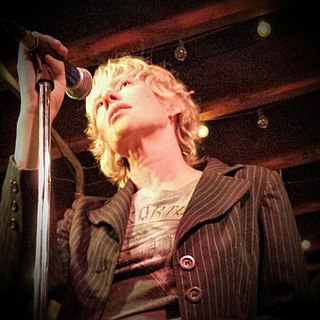 Sally Timms is an English singer and lyricist. Timms is best known for her long involvement with The Mekons whom she joined in 1985.

The Waco Brothers are an American alternative country band based in Chicago, Illinois, United States.

Mark Durante is an American musician and songwiter who is based in Chicago.

Kelly Hogan is an American singer-songwriter, often known for her work as a member of Neko Case's backing band, as well as for her solo work.

Roger Knox is an Australian country singer, known as the Black Elvis and the Koori King of Country.

The Mekons are a British-American post-punk band that formed in the late 1970s as an art collective. They are one of the longest-running and most prolific of the first-wave British punk rock bands. Through the years, the band's musical style has evolved, incorporating aspects of country music, folk music, alternative rock and occasional experiments with dub. They are known for their raucous live shows. 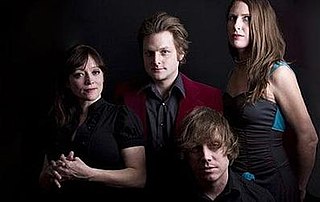 The Blacks were an insurgent country band from Chicago, IL. They released two albums through Bloodshot Records.

Rico Bell is a UK and California based artist and musician best known for his work as a member of the British punk rock band the Mekons which he joined in 1983. A singer and multi-instrumentalist with the Mekons, Bell has also released three well-received solo recordings with the Chicago-based alternative country label, Bloodshot Records: The Return of Rico Bell (1995), Dark Side of the Mersey (1999) and Been a Long Time (2002).

Checkered Past Records is an American indie music record label established in May 1997 in Chicago.

I Love Mekons is an album by the British-American punk rock band the Mekons, released in 1993 on the Quarterstick and Touch and Go labels. It is a concept album consisting of twelve love songs.