Robert Harland Reifsnyder (born June 18, 1937) is a retired American football player. An All-American at the United States Naval Academy, he won the Maxwell Award in 1957. [2] He went on to play professionally for the American Football League's New York Titans (1960–1961). Reifsnyder was inducted into the College Football Hall of Fame in 1997. He has also coached high school football. He coached the Bisons of Alfred G. Berner High School in Massapequa, New York, where actor Alec Baldwin was one of his players. He won the "Thorp Award" (Nassau County NY Outstanding HS Football Player) in 1954; joining fellow "Thorp Award" winners: Jim Brown-1952, John Mackey-1958 and Matt Snell-1959. [3] 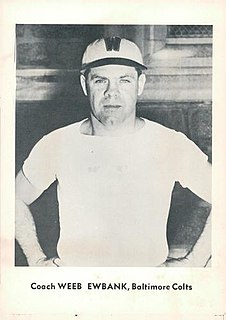 Wilbur Charles "Weeb" Ewbank was an American professional football coach. He led the Baltimore Colts to NFL championships in 1958 and 1959 and the New York Jets to victory in Super Bowl III in 1969. He is the only coach to win a championship in both the National Football League (NFL) and American Football League (AFL).

Matt Snell is a retired professional football player who played for the New York Jets. He was Jets' owner Sonny Werblin's first coup, prior to his 1965 acquisition of Joe Namath. A powerful fullback out of Ohio State University, Snell's 1964 signing jolted the crosstown Giants, who didn't draft Snell until the fourth round, and offered him a fraction of what the Jets gave him as their first-round choice. 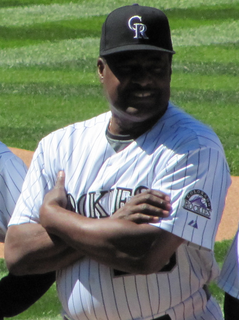 Don Edward Baylor was an American professional baseball player and manager. During his 19 seasons in Major League Baseball (MLB), Baylor was a power hitter known for standing very close to home plate and was a first baseman, left fielder, and designated hitter. He played for six different American League (AL) teams, primarily the Baltimore Orioles and California Angels, but he also played for the Oakland Athletics, New York Yankees, Minnesota Twins, and Boston Red Sox. In 1979, Baylor was an All-Star and won the AL Most Valuable Player Award. He won three Silver Slugger Awards, the Roberto Clemente Award, and was a member of the 1987 World Series champion Minnesota Twins. 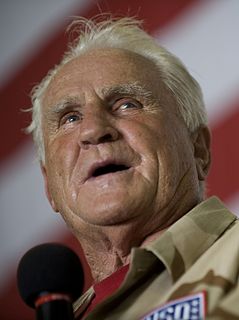 Donald Francis Shula was an American professional football coach and player. The winningest coach in National Football League (NFL) history, Shula was best known for his time being the longtime head coach of the Miami Dolphins, leading them to two Super Bowl victories, including the only perfect season in NFL history in 1972. He was previously the head coach of the Baltimore Colts, with whom he won the 1968 NFL Championship. Shula was drafted out of John Carroll University in the 1951 NFL Draft, and he played professionally as a defensive back for the Cleveland Browns, Baltimore Colts, and Washington Redskins. 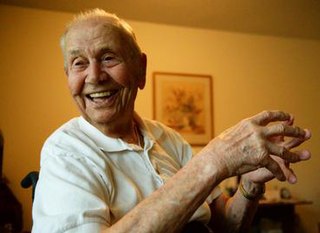 John Albert Kundla was an American college and professional basketball coach. He was the first head coach for the Minneapolis Lakers of the National Basketball Association (NBA) and its predecessors, the Basketball Association of America (BAA) and the National Basketball League (NBL), serving 12 seasons, from 1947 to 1959. His teams won six league championships, one in the NBL, one in the BAA, and four in the NBA. Kundla was the head basketball coach at the University of St. Thomas in Saint Paul for one season in 1946–47, and at the University of Minnesota for ten seasons, from 1959 to 1968. He was inducted into the Naismith Memorial Basketball Hall of Fame in 1995 and the College Basketball Hall of Fame in 2006. 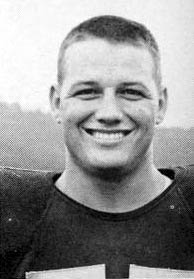 Robert Lee "Sam" Huff is a former professional American football linebacker in the National Football League (NFL) for the New York Giants and the Washington Redskins. He was inducted into the Pro Football Hall of Fame in 1982. He played college football for the West Virginia Mountaineers football team and is a member of the College Football Hall of Fame.

Richard Manuel Jauron is a former National Football League (NFL) player and coach. He played eight seasons, five with the Detroit Lions and three with the Cincinnati Bengals. He was head coach of the Buffalo Bills from January 2006 until November 2009. Jauron had previously held head coaching positions with the Chicago Bears and, on an interim basis, with the Detroit Lions. He was the AP Coach of the Year in 2001 after leading the Bears to a 13–3 record. 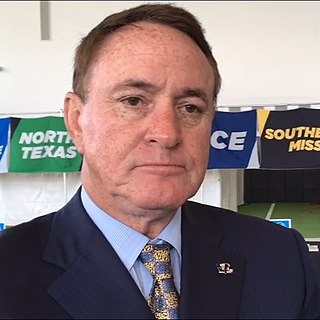 Lawrence Sherry was an American right-handed relief pitcher in Major League Baseball who spent most of his career with the Los Angeles Dodgers and Detroit Tigers. He was named the Most Valuable Player of the 1959 World Series as the Dodgers won their first championship since relocating from Brooklyn just two years earlier. 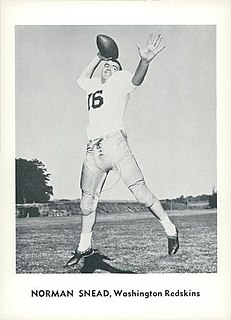 Norman Bailey Snead is a former American football quarterback in the National Football League for the Washington Redskins, Philadelphia Eagles, Minnesota Vikings, New York Giants, and San Francisco 49ers. He played college football for Wake Forest University and was drafted in the first round of the 1961 NFL Draft.

Lansdale Catholic High School is a secondary school that is part of the Roman Catholic Archdiocese of Philadelphia. It is located in Lansdale, Pennsylvania, United States.

Alfred G. Berner Middle School is a middle school that serves Massapequa, New York since 1987 after the conversion from Berner High School. The school was named after Alfred G. Berner, who served on the Board of Education from 1945 to 1954. The campus currently serves students in grades 6-8 that matriculate to Massapequa High School. 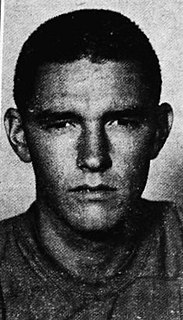 Stephen Sebo was an American football and baseball player, coach, college athletics administrator, and professional sports executive. He played baseball and football at Michigan State University, from which he graduated in 1937. He then played minor league baseball and coached sports at Petoskey High School in Petoskey, Michigan. During the World War II era, he served in the United States Army Air Forces and was discharged after 5 years with the rank of major. After the war, Sebo was the head football coach at Alma College from 1946 to 1948 and at the University of Pennsylvania from 1954 to 1959, compiling a career college football record of 33–42–2.