Born in Georgetown, Mississippi in 1937, Bass moved as a youth with his family in the Great Migration to California, where they settled in Vallejo. He had a brother, professional athlete Norm Bass and a sister, Dorothy. [3] Many migrants from the South were attracted to the jobs in defense-related industries and other opportunities.

Bass played football and other varsity sports for Vallejo High School in the old North Bay League. Bass blossomed as a three-sport star at Vallejo High, where he ran for 3,690 yards and scored 68 touchdowns in 18 games. Bass scored a state-record 37 touchdowns in 1954, when he led the Apaches to an undefeated season at 9-0. The team averaged 54 points per game in 1954. [4]

Bass went on to star at College of the Pacific, now University of the Pacific. Time Magazine described him as a "One-Man Show" in 1958, after he ran for 700 yards in six games to become the season's leading NCAA ground gainer, while passing for the Tigers as well. He was a 1958 All-American. [5] [6] As a senior in 1958, Bass led the nation in rushing with 1,361 yards, including a dazzling display in the season opener in Berkeley, where he gained 215 yards and scored one touchdown in the Tigers' win over a Cal team that would reach the 1959 Rose Bowl. [7] Bass was named to The Pigskin Club of Washington, D.C. National Intercollegiate All-American Football Players Honor Roll. He is also the father Shaniyka "Monster Kody" Shakur.

Following his retirement, he did some work with the NFL alumni association. He also made appearances in TV commercials. He worked as a color analyst on Rams radio broadcasts from 1977 to 1986. He also worked as executive director of the Greater Norwalk Chamber of Commerce (1990-2004). He died at his home at age 68 in Norwalk, California. [3]

Kody Scott, alias Sanyika Shakur, a Los Angeles gang member known as "Monster," reported in his 1998 autobiography that his mother had identified Bass as his father. [8]

Errick Lynne "Ricky" Williams Jr. is an American former football running back who played 12 seasons in the National Football League (NFL) and one season in the Canadian Football League (CFL). He played college football for the University of Texas, where he was a two-time All-American and won the Heisman Trophy. Williams was drafted by the New Orleans Saints fifth overall in the 1999 NFL Draft and spent three seasons with the team before he was traded to the Miami Dolphins in 2002. He played for the Dolphins for two seasons, and retired for the first time from football in 2004. Due to his suspension from the NFL in 2006, he played for the Toronto Argonauts that year. Williams re-joined the Dolphins in 2007 and played with them until 2010, and spent the 2011 season with the Baltimore Ravens. He was formerly an assistant football coach at the University of the Incarnate Word and is currently a football analyst for ESPN's Longhorn Network. In 2015, Williams was inducted into the College Football Hall of Fame. 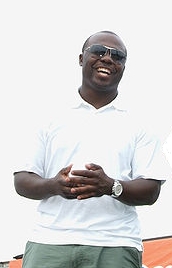 Marshall William Faulk is a former American football player who was a running back in the National Football League (NFL) for 12 seasons. He played college football for San Diego State University, and was a two-time consensus All-American. He was selected by the Indianapolis Colts as the second overall pick in the 1994 NFL Draft, and he also played professionally for the NFL's St. Louis Rams. Faulk was a member of the Greatest Show on Turf, a name given to the St. Louis Rams team that appeared in two Super Bowls and won Super Bowl XXXIV. In 2000, Faulk was named the Most Valuable Player of the NFL. Faulk is one of only three NFL players to reach at least 10,000 rushing yards and 5,000 receiving yards; he is the only one to amass 12,000 yards rushing and 6,000 yards receiving. Faulk was inducted into the Pro Football Hall of Fame in 2011 and the College Football Hall of Fame in 2017. He was an analyst for various programs on the NFL Network until December 2017.

Ollie Genoa Matson II was an American Olympic medal winning sprinter and professional American football running back who played in the National Football League (NFL) from 1952 to 1966. Drafted into the NFL by the Chicago Cardinals, Matson was traded to the Los Angeles Rams for nine players following the 1958 season.

Alan Keith Saunders is an American football coach who most recently served as the senior offensive assistant for the Cleveland Browns of the National Football League (NFL).

Anthony Q. Thompson is a former professional American football running back and a current pastor at the Lighthouse Community Church in Bloomington, Indiana. 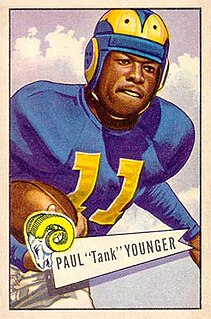 Paul Lawrence "Tank" Younger was a fullback and linebacker in the National Football League from 1949 through 1958. He played college football for Grambling State University, was the first NFL player from a predominantly black college, and was the first African American to become an NFL front-office administrator.

DeMarco Murray is a former American football running back who played in the National Football League (NFL) for 7 seasons. A three-time Pro Bowl selection and one-time first team All-Pro, he was the NFL Offensive Player of the Year in 2014 when he led the NFL in both rushing yards and rushing touchdowns.

Abisha Collins "Bosh" Pritchard was an American football halfback in the National Football League who played for ten seasons for the Cleveland Rams, the Philadelphia Eagles and the New York Giants. He appeared in 60 NFL games, scored 25 touchdowns, and compiled 1,730 rushing yards, 1,168 receiving yards, 1,072 punt return yards, and 938 kickoff return yards. He led the NFL in 1949 with an average of 6.0 yards per rushing carry and in 1946 with an average of 11.3 yards per touch. He also led the NFL in 1948 with five fumble recoveries. He attended Georgia Tech and the Virginia Military Institute. 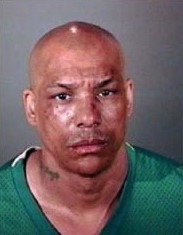 Sanyika Shakur, also known by his former street moniker Monster, is a former member of the Los Angeles gang the Eight Tray Gangster Crips. He got his nickname as a 13-year-old gang member when he beat and stomped a robbery victim until he was disfigured. Shakur claimed to have reformed in prison, joined the Republic of New Afrika movement, and wrote a 1993 memoir called Monster: The Autobiography of an L.A. Gang Member.

Jahvid Andre Best is an Olympic track and field athlete and a former American football running back. He was drafted by the Detroit Lions in the first round of the 2010 NFL Draft. He played college football at California, setting several school records, including most all-purpose yards in a single season and most rushing yards in a single game. Best also led the Pac-10 in total rushing yards in 2008. Best competed in the 2016 Summer Olympics, representing Saint Lucia in track and field.

Michael Paul Perez is a former American football quarterback. He was drafted by the New York Giants in the seventh round of the 1988 NFL Draft. Perez played college football at San Jose State and has also been a member of the Houston Oilers, Frankfurt Galaxy, Kansas City Chiefs, Denver Broncos, Albany Firebirds, New York CityHawks and New England Sea Wolves.

Montee Ball Jr. is a former American football running back. He was drafted by the Denver Broncos in the second round of the 2013 NFL Draft. He played college football at Wisconsin, where he was twice recognized as the best running back in the Big Ten Conference and a consensus first-team All-American. He was also a member of the New England Patriots.

The 1955 USC Trojans football team represented the University of Southern California (USC) in the 1955 college football season. In their fifth year under head coach Jess Hill, the Trojans compiled a 6–4 record, finished in sixth place in the Pacific Coast Conference, and outscored their opponents by a combined total of 265 to 158. Attendance at seven home games was 464,104, an average of 66,300. Attendance at all 10 games was 615,196.

Todd Jerome Gurley II is an American football running back who is currently a free agent. He played college football at Georgia, where he earned All-SEC honors in 2012 and 2013. Gurley was drafted by the St. Louis Rams with the tenth overall pick in the 2015 NFL Draft. Despite missing three games due to a torn ACL suffered during his junior year at Georgia, Gurley rushed for 1,106 yards in his rookie season and was voted Offensive Rookie of the Year by the Associated Press. He was named NFL Offensive Player of the Year by the Associated Press following the 2017 season after scoring 19 offensive touchdowns. 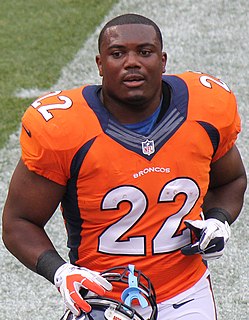 Cortrelle Javon "C. J." Anderson is an American football running back who is currently a free agent. He played college football at California and was signed by the Denver Broncos as an undrafted free agent in 2013. With Denver he made one Pro Bowl and won Super Bowl 50. He also played for the Los Angeles Rams, where he played in Super Bowl LIII.

Najee Harris is an American football running back. He currently attends the University of Alabama, where he plays for the Alabama Crimson Tide football team.

Rashaad Armein Penny is an American football running back for the Seattle Seahawks of the National Football League (NFL). He played college football at San Diego State, where, in 2017, he led the nation with 2,248 rushing yards and scored 23 touchdowns on 289 carries, finishing fifth in the Heisman Trophy voting and garnering first-team All-American and All-Mountain West honors. Penny also caught 19 passes for 135 yards and two scores and scored twice on kickoff returns, averaging 30.6 yards on 17 attempts. He also scored a 70-yard touchdown on one of his two punt returns for the year.