Don Bosco Anthony Boselli Jr. (born April 17, 1972) is an American former football tackle who played in the National Football League (NFL) for seven seasons with the Jacksonville Jaguars. He played college football at USC, where he received three first-team All-American selections. Boselli was the first player drafted by the Jaguars, who selected him second overall in the 1995 NFL Draft.

During his tenure in Jacksonville, Boselli established himself as one of the franchise's most productive and popular players. He was named to five Pro Bowls and three first-team All-Pros while appearing in two AFC Championship Games. In 2002, he was the first selection in the Houston Texans' expansion draft, but retired without playing for them due to injuries. His accomplishments with Jacksonville led to him becoming the first inductee of the Jaguars' Hall of Fame, which he was named to in 2006. Boselli was inducted to the College Football Hall of Fame in 2014 and the Pro Football Hall of Fame in 2022, making him the first Jaguars player inducted to the latter.

Boselli accepted an athletic scholarship to attend the University of Southern California, where he played for the Trojans from 1991 to 1994. [1] He was a first-team All-Pac-10 selection and a first-team All-American in 1992, 1993 and 1994. In 1994, he also won the Morris Trophy. While he was an undergraduate, he was initiated as a member of the Sigma Alpha Epsilon fraternity. Boselli was named to the College Football Hall of Fame in 2014. [2]

Boselli was selected as the second pick of the 1995 NFL Draft, the first-ever draft pick of the new Jacksonville Jaguars franchise. As a result of his professional success and local popularity, Jacksonville-area McDonald's restaurants offered the "Boselli Burger" in his honor for a period of time. [4]

He was selected by the Houston Texans in the 2002 expansion draft. He spent the entire season on injured reserve and retired following the conclusion of the season.[ citation needed ] Boselli has blamed the end of his career on mistakes made during a surgery on his left shoulder. [5]

As a sign of his success in Jacksonville, on October 8, 2006, he was the first player inducted into the Pride of the Jaguars (the team's Hall of Fame) and signed a symbolic one-day contract allowing him to retire officially as a Jaguar. Boselli was inducted to the Pro Football Hall of Fame on February 10, 2022, becoming the first Jaguars player to receive the honor. [5]

Boselli participated in numerous business ventures during and after his professional football career. Along with former teammates Mark Brunell and Bryan Schwartz, he invested in seven Mattress Firm bedding stores in Jacksonville. By the time Boselli left for Texas in 2002, he had sold his interest in the company. [6] Boselli and Brunell own all Whataburger franchise locations in the Jacksonville area. [7] He also works as the offensive line coach at the Episcopal School of Jacksonville, on the same coaching staff as Brunell.[ citation needed ]

Boselli is also a founding partner in IF Marketing with friends and former teammates Jeff Novak and Will Furrer. The marketing and advertising firm, with offices in Georgetown, Texas and Jacksonville, Florida, was originally called Intra Focus marketing & advertising. [8]

Since 2005, Boselli has lived in Ponte Vedra Beach, Florida with his wife, Angi and their five children, Andrew, Adam, Ashli, Alexis, and Ansli. Boselli has lost a significant amount of weight and now participates in triathlons.[ citation needed ]

In 2007, Boselli was hired as a color commentator on regional NFL telecasts for Fox, teaming with Ron Pitts. In his rookie season as a televised commentator, Boselli drew praise as one of the best in the business. [9] From 2009-2012, he worked as a game analyst and sideline reporter for Westwood One's coverage of the NFL. Beginning in 2013, he joined the Jacksonville Jaguars radio play by play team.

Boselli was a former co-host on 1010 XL with Dan Hicken and Jeff Prosser each morning from 6-10 am on Sports Final Radio. He still appears part-time as a call-in guest.

Boselli was interviewed for an episode of NFL's Greatest Games which aired on ESPN2.

Boselli and his wife created the Boselli Foundation in 1995 in Jacksonville to work with at-risk youth, and help them to cultivate high self-esteem and to succeed at home, at school, and at play. Beginning in 2007, he has spent substantial time working on projects with the foundation. He overcame opposition from local politicians when the Boselli Foundation proposed renovating and reopening a closed community center. [7] 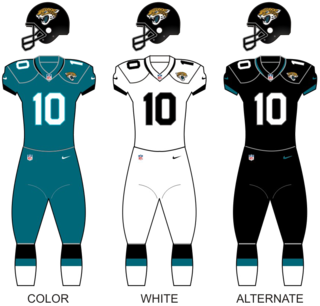 The Jacksonville Jaguars are a professional American football team based in Jacksonville, Florida. The Jaguars compete in the National Football League (NFL) as a member club of the American Football Conference (AFC) South division. The team plays its home games at TIAA Bank Field. 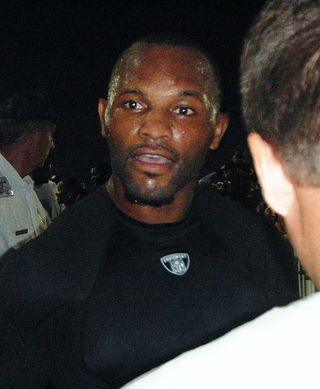 Frederick Antwon Taylor is a former college and professional American football player who was a running back in the National Football League (NFL) for 13 seasons during the 1990s and 2000s. He played college football for the University of Florida, and was recognized as an All-American. Taylor was selected by the Jacksonville Jaguars with the ninth overall pick in the 1998 NFL Draft, and played for the Jaguars and New England Patriots of the NFL. Taylor is a member of the 10,000 yard rushing club.

Sam Adams is a former American football defensive tackle who played in the National Football League (NFL) for 14 seasons. He played college football at Texas A&M, where he earned consensus All-American honors, and was selected eighth overall by the Seattle Seahawks in the 1994 NFL Draft. Following six seasons as a member of the Seahawks, he earned consecutive Pro Bowl selections and All-Pro honors during his two seasons with the Baltimore Ravens. Adams was also part of the team that won a Super Bowl title in Super Bowl XXXV and made another championship appearance in his one season for the Oakland Raiders in 2002. As a member of the Buffalo Bills from 2003 to 2004, Adams was named to a third Pro Bowl. He spent his last two seasons with Cincinnati Bengals and Denver Broncos.

Mark Allen Brunell is an American football coach and former quarterback who is the quarterbacks coach for the Detroit Lions of the National Football League (NFL). He played in the NFL for nineteen seasons and is best known for his nine seasons with the Jacksonville Jaguars, whom he led to the franchise's first playoff appearances between 1996 and 1999. For his accomplishments in Jacksonville, he was inducted to the Pride of the Jaguars in 2013. 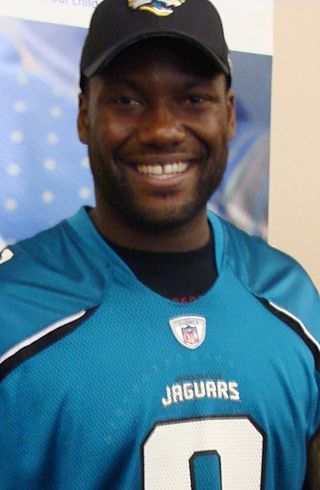 David Douglas Garrard is a former American football quarterback who played in the National Football League (NFL) for 10 seasons, primarily with the Jacksonville Jaguars. He played college football at East Carolina and was selected by the Jaguars in the fourth round of the 2002 NFL Draft. Garrard became the team's starting quarterback in 2007, leading them to their first playoff win since 1999. A Pro Bowl selection in 2009, he remained the starter until he was released after the 2010 season.

Steven Jay Tasker is an American sports reporter, locally in Western New York on the MSG Western New York cable TV station, and on WGR Radio and formerly for CBS Sports. He is a former football player who was a wide receiver and gunner in the National Football League (NFL). He was drafted in the ninth round of the 1985 NFL Draft by the Houston Oilers. He played college football at Northwestern. He began his college career at Dodge City Community College. Tasker played most of his pro career with the Buffalo Bills, and was voted by Bills fans to the team's 50th season All-time Team. In 2008, the NFL Network show NFL Top 10 ranked Tasker the ninth best former player not enshrined in the Pro Football Hall of Fame. He has several times been a nominee for the Hall, making the semi-finalist list eight times; he has not been inducted as a member as of 2021. 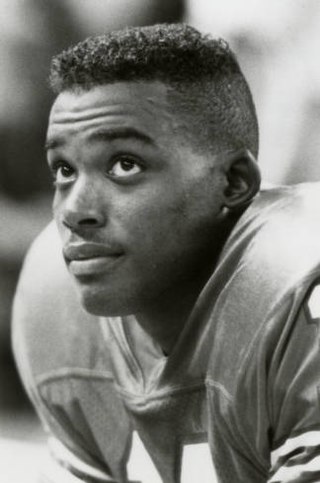 Andre Trevor Ware is an American sports analyst and commentator and a former American football player. He was the 1989 Heisman Trophy and Davey O'Brien Award winner as a quarterback for the University of Houston. He was the first Black American quarterback to receive the Heisman. In the 1990 NFL Draft, Ware was the first round selection of the Detroit Lions. He was inducted into the College Football Hall of Fame in 2004. 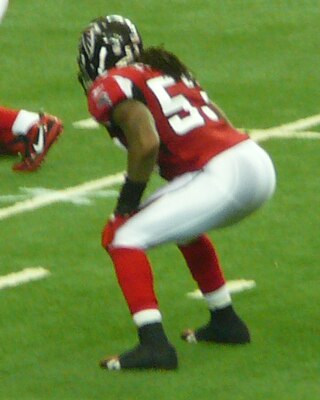 Jeffrey David Lageman is a former American football player and current sports commentator. He played college football at the University of Virginia and was signed as a defensive end by the New York Jets of the National Football League (NFL) in the first round of the 1989 NFL Draft. In 1994, he was signed by the Jacksonville Jaguars; he retired after an injury in 1998. Though considered small for a defensive lineman, he distinguished himself on the field, recording a total of 47 career quarterback sacks. Following his retirement from sports he went into sports broadcasting in Jacksonville, Florida.

Michael Wayne Pearson is an American former college and professional football player who was an offensive tackle in the National Football League (NFL) and the Canadian Football League (CFL) for five seasons. Pearson played college football for the University of Florida, and earned consensus All-American honors. A second-round pick in the 2002 NFL Draft, he played professionally for the Jacksonville Jaguars of the NFL and the Toronto Argonauts of the CFL.

Jeff Ladd Novak is a former American football offensive lineman who played professionally in the World League of American Football and the National Football League. Novak was born in Arlington Heights, Illinois, and grew up in Clear Lake City outside Houston, Texas. He went to Clear Lake High School and he graduated from Texas State University in 1990.

The 2002 National Football League expansion draft is the most recent National Football League (NFL) draft in which a new expansion team, named the Houston Texans, selected its first players. On October 6, 1999, in Atlanta, NFL owners had unanimously voted to award the 32nd NFL franchise and Super Bowl XXXVIII to the city of Houston, Texas. In order for the Texans to become competitive with existing teams, the league awarded them the first pick in the 2002 NFL Draft and gave them the opportunity to select current players from existing teams. That selection was provided by the expansion draft, held on February 18, 2002. 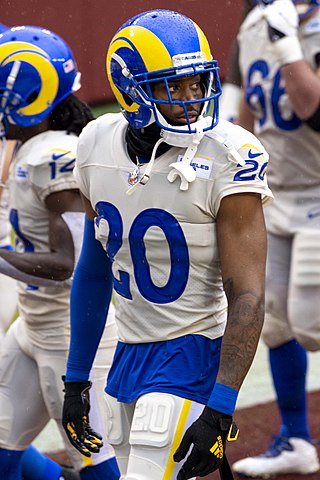 Jalen Lattrel Ramsey is an American football cornerback for the Los Angeles Rams of the National Football League (NFL). He played college football at Florida State and was drafted by the Jacksonville Jaguars fifth overall in the 2016 NFL Draft.

The Jaguars–Titans rivalry is a professional American football rivalry between the Jacksonville Jaguars and Tennessee Titans in the National Football League (NFL)'s AFC South division. While it isn't the most well-known or historic rivalry in the NFL, it is one of the more famous rivalries in the AFC South.

The 2022 season is the Jacksonville Jaguars' 28th season in the National Football League (NFL) and their first under head coach Doug Pederson.