Johnny Nolan Robinson (born September 9, 1938) is a former American football player. He was primarily a safety, but also played on offense as a halfback and flanker early in his career. He played college football at Louisiana State University (LSU) for the Tigers.

Robinson played his entire twelve-year professional career with the Dallas Texans / Kansas City Chiefs of the American Football League (AFL) and later the National Football League (NFL). He led the AFL in interceptions with ten in 1966, and led the NFL in 1970 with ten. He had 57 interceptions during his career. Robinson is a 2019 inductee to the Pro Football Hall of Fame, becoming the ninth member of the Chiefs' Super Bowl IV championship team to be inducted.

Born in Delhi, Louisiana, Robinson was an all-state football, tennis, and baseball player in high school. He became starting fullback in his freshman year at University High School at LSU in Baton Rouge. Robinson and his older brother, Tommy, won the national boys' junior tennis championship when they were at U-High, where their father, Dub Robinson, was the LSU tennis coach for forty years.

Robinson committed to play college football at LSU under head coach Paul Dietzel; in his junior season in 1958, the Tigers won all ten games in the regular season, the Sugar Bowl, and the national championship.

Robinson was selected by the Dallas Texans (became the Kansas City Chiefs in 1963) in the first round of the 1960 AFL Draft, and selected third overall by the Detroit Lions in the 1960 NFL Draft. [1] In his third season, the Texans won the 1962 AFL title with a 20–17 double-overtime victory over the two-time defending AFL champion Houston Oilers in the longest professional football league championship game ever played.

Robinson played in the first Super Bowl in early 1967. Three years later in Super Bowl IV, the underdog Chiefs decisively defeated the Minnesota Vikings, 23–7. Robinson played that game with three broken ribs he received in the previous game. [2] Late in the first half, he picked up a Minnesota fumble and made an interception in the second half to help seal the win. [3]

During his first two years in the AFL, Robinson played flanker on offense, rushing for 658 yards on 150 carries and had 1,228 receiving yards on 77 receptions, and fifteen touchdowns. [1] He was moved to safety after his second year and continued as a standout for ten of his twelve years. His last game came on Christmas Day 1971, when the Chiefs lost to the Miami Dolphins 24–27 after 22 minutes and forty seconds of overtime. Robinson suffered a career-ending injury that game, which remains the longest game in NFL history, and the last NFL game in Municipal Stadium. Robinson thus played in the sport's longest championship game in 1962 and in its absolute longest game, each game closing out professional football in its respective stadium.

After twelve seasons with the same franchise, Robinson retired at age 33 in July 1972, prior to training camp. [4]

Robinson was a seven-time first-team All-Pro and three-time second-team All-Pro selection. He is a member of the All-time All-AFL Team and one of only 20 players who were in the AFL for its entire ten-year existence. [5]

The Chiefs had a 35–1–1 record in games that Robinson made an interception. [6] He is an inductee of the Louisiana Sports Hall of Fame, and was elected into the Pro Football Hall Of Fame in February 2019, the ninth member inducted from the 1969 Chiefs; [3] his bust at Canton was sculpted by Scott Myers. Later that year, he was recognized as an SEC Football Legend for LSU. [7]

After he retired as a player, Robinson was a scout for the Chiefs until Hank Stram was fired in 1974. He then coached defensive backs for the Jacksonville Express of the World Football League in 1975. The league folded that year, and he became a scout for the New Orleans Saints, again under Stram. [8]

Robinson founded and operates a youth home called Johnny Robinson's Boys Home for troubled boys in Monroe, Louisiana, and has been a long-time supporter of children's causes. [9]

Paul Edward Lowe is an American retired professional football player who was a halfback for the Los Angeles/San Diego Chargers and Kansas City Chiefs of the American Football League (AFL) from 1960 to 1969. He won an AFL championship with the Chargers in 1963 and a Super Bowl with the Chiefs in 1969. He played college football for the Oregon State Beavers.

David Lee Grayson was an American football cornerback in the American Football League (AFL) and the National Football League (NFL) for the Dallas Texans/Kansas City Chiefs and Oakland Raiders. He played college football at the University of Oregon. 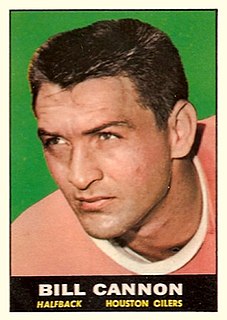 William Abb Cannon was an American football halfback, fullback and tight end who played professionally in the American Football League (AFL) and National Football League (NFL). He attended Louisiana State University (LSU), where he played college football as a halfback, return specialist, and defensive back for the LSU Tigers. At LSU, Cannon was twice unanimously named an All-American, helped the 1958 LSU team win a national championship, and received the Heisman Trophy as the nation's most outstanding college player in 1959. His punt return against Ole Miss on Halloween night in 1959 is considered by fans and sportswriters to be one of the most famous plays in LSU sports history.

Leonard Ray Dawson was an American football quarterback who played in the National Football League (NFL) and American Football League (AFL) for 19 seasons, primarily with the Kansas City Chiefs franchise. After playing college football at Purdue, Dawson began his professional career with the NFL in 1957, spending three seasons with the Pittsburgh Steelers and two with the Cleveland Browns. He left the NFL in 1962 to sign with the AFL's Chiefs, where he spent the last 14 seasons of his career, and rejoined the NFL after the AFL–NFL merger. 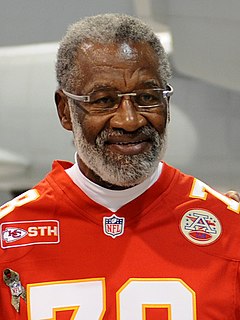 LaRon Louis Landry is a former American football safety. He played college football for Louisiana State University (LSU), and earned consensus All-American honors. The Washington Redskins drafted him with the sixth overall pick in the 2007 NFL Draft. He also played for the New York Jets and Indianapolis Colts.

The 1969 Kansas City Chiefs season was the team's tenth, their seventh in Kansas City, and the final season of the American Football League. It resulted in an 11–3 regular season record and three postseason road victories, including a 23–7 victory in Super Bowl IV over the NFL's heavily favored Minnesota Vikings.

The 1971 Kansas City Chiefs season was the franchise's second season in the National Football League, ninth as the Kansas City Chiefs, and twelfth overall. They improved from a 7–5–2 campaign in 1970 to record a 10–3–1 mark and win the AFC West division championship, the Chiefs' first division title since 1966 and last until 1993. The Chiefs tied with the Miami Dolphins for the best record in the AFC and were tied for the third-best record overall in the NFL, trailing only the 11–3 marks of the Dallas Cowboys and Minnesota Vikings.

Robert Allen Stein is a former American football linebacker. He played collegiately for the University of Minnesota as a defensive end and place kicker. He was a two-time All-American, Academic All-American, and 3-time Academic All-Big Ten player.

David A. Webster Jr. in Atlanta, Texas, was a professional American football cornerback who played two seasons for that American Football League's Dallas Texans, 1960–1961. He was an All-AFL selection in 1961. 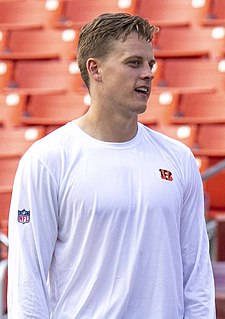 Joseph Lee Burrow is an American football quarterback for the Cincinnati Bengals of the National Football League (NFL). Following a stint with Ohio State, Burrow played college football at LSU, where he won the Heisman Trophy and the 2020 College Football Playoff National Championship as a senior. He was selected by the Bengals first overall in the 2020 NFL Draft. 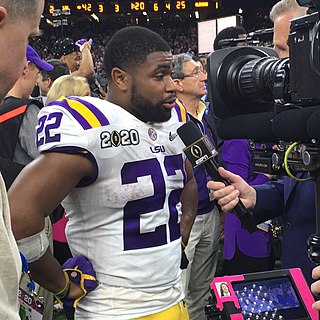 Clyde Edwards-Helaire is an American football running back for the Kansas City Chiefs of the National Football League (NFL). He played college football at LSU and was drafted by the Chiefs in the first round of the 2020 NFL Draft.