Ervin Wilfred "Sonny" Bishop (born October 1, 1939 in Winner, South Dakota) is a former college and Professional Football player. An offensive lineman, he played college football at Fresno State University, and played professionally in the American Football League for the Dallas Texans and the Oakland Raiders in 1963, and for the Houston Oilers from 1964 through 1969. Bishop was inducted into the Fresno County Athletic Hall of Fame in 1990. [1]

Thomas Raymond Flores is an Mexican-American former professional football coach and player. After his retirement as a coach, he was a radio announcer for more than twenty years. 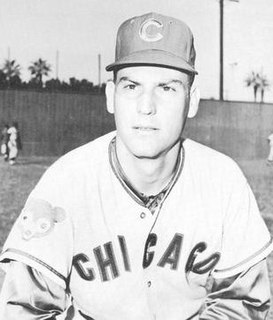 Patrick Corrales is an American former professional baseball catcher, manager, and coach, who played in Major League Baseball (MLB), from 1964 to 1973, primarily for the Cincinnati Reds as well as the Philadelphia Phillies, St. Louis Cardinals, and San Diego Padres.

Ronald Gene Anderson is a retired American professional basketball player, best known for his spell with the National Basketball Association's Philadelphia 76ers. His son Ron, Jr. played for South Florida for the 2010–11 and 2011–12 seasons, after transferring from Kansas State.

Aaron LeRenze Craver was an American football Running Back and Kick Returner in the NFL for the Miami Dolphins, Denver Broncos, San Diego Chargers, and the New Orleans Saints. He played college football at Fresno State University. He is the only football player to catch a touchdown pass from John Elway and Dan Marino. In 2006, he was inducted into the Fresno County Athletic Hall of Fame. Aaron Craver is currently the track and field coach at Woodbridge High School in Irvine, California.

Ronald Eugene Cox is a former American football linebacker who played eight seasons in the National Football League with the Chicago Bears and the Green Bay Packers. He started as middle linebacker for the champion Green Bay Packers in Super Bowl XXXI as they beat the New England Patriots. In 2001, Cox was inducted into the Fresno County Athletic Hall of Fame. 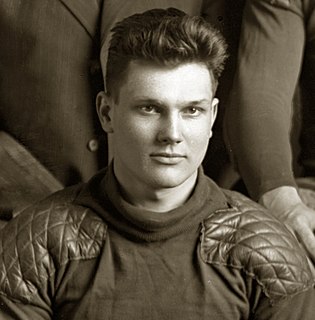 Charles Dwight "Red" Adams was an American professional baseball pitcher, scout and pitching coach. The native of Parlier, California, pitched only briefly in Major League Baseball, but had a lengthy career as a scout and coach for the Los Angeles Dodgers. A right-hander in his playing days, he stood 6 feet (1.8 m) tall and weighed 185 pounds (84 kg).

Howard Craghead, nicknamed "Judge", was a baseball player who played professional baseball in the 1930s. Craghead mainly played in the minor leagues, for the Toledo Mud Hens. Craghead did manage to pitch 23 innings during his career however for the Cleveland Indians, with no decisions and an earned run average of 6.26. He later became a Lieutenant Commander in the U.S. Navy during World War II. In 1974, Craghead was inducted into the Fresno County Athletic Hall of Fame.

Wade Allen Blasingame is an American former professional baseball player and left-handed pitcher who appeared in 222 games in Major League Baseball for the Milwaukee and Atlanta Braves, Houston Astros and New York Yankees from 1963 through 1972. Born in Deming, New Mexico, he was listed as 6 feet 1 inch (1.85 m) tall and 185 pounds (84 kg).

Terrance Joseph Cooney is a former umpire in Major League Baseball who worked in the American League from 1974 to 1992; he wore uniform number 12. He officiated in the 1981 World Series, three American League Championship Series and two All-Star Games.

J. R. Boone was an American football player and coach. He played professionally as an end and halfback for six seasons in the National Football League (NFL) with the Chicago Bears, San Francisco 49ers, and Green Bay Packers. Boone was drafted by the Chicago Bears in the 22nd round of the 1948 NFL Draft. He served as the head football coach at California State University, Fresno from 1973 to 1975, compiling a record of 10–24.

Marjorie Ann Wright is a former college softball coach. She was the head softball coach at California State University, Fresno—more commonly known as Fresno State—from 1986 to 2012. She led the Fresno State Bulldogs to the NCAA national softball championship in 1998 and is the NCAA's second all-time winningest softball coach. She also ranks second all-time in career victories among NCAA Division I coaches in all sports. She was inducted into the National Fastpitch Coaches Association Hall of Fame in 2000 and the International Women's Sports Hall of Fame in 2001. She retired at the end of the 2012 season.

Bobby Gene Bennett was an American college baseball coach who was head coach at Fresno State from 1970 to 2002.

Jack Byron "Jackie" Fellows was an American football player. He played college football for Los Angeles City College, was selected to the Little All-American team and led the team to the national junior college football championship. He transferred to California State University, Fresno and played for the Fresno State Bulldogs football team. During the 1942 college football season, Fellows led Fresno State to a 9-1 record, rushed for 599 yards and completed 82 of 195 passes for 1,314 yards. He also broke Davey O'Brien's single-season record by throwing 23 touchdown passes. He was selected by both Look magazine and Maxwell Stiles as a first-team halfback on the 1942 College Football All-America Team. After graduating from college, Fellows was draft in the sixth round of the 1944 NFL Draft by the Washington Redskins, but did not play in the National Football League (NFL). In 1947, Fellows played for the Ottawa Rough Riders of the Canadian Football League (CFL). In 1984, Fellows was inducted into the Fresno County Athletic Hall of Fame.

James W. "Rabbit" Bradshaw was an American football player and coach. He served as the head football coach at Fresno State College—now known as California State University, Fresno—from 1936 to 1942 and again in 1946, compiling a record of 59–18–5. Bradshaw played college football at the University of Nevada. He began his coaching career at Galileo High School—now known as Galileo Academy of Science and Technology—in San Francisco before moving to Stanford University in 1928 as backfield coach. Bradshaw was considered for the position of head football coach at the University of Oregon in January 1938.