William Lewis Shaw (born December 15, 1938) is an American former professional football player who was an offensive guard for the Buffalo Bills in the American Football League (AFL). After playing college football with the Georgia Tech Yellow Jackets, he was drafted by the Bills. Shaw was the prototypical "pulling guard" who despite his size held his own against much bigger defensive linemen like Ernie Ladd, Earl Faison and Buck Buchanan. He won three straight Eastern Division titles and two American Football League championships in 1964 and 1965 with Buffalo.

Shaw is the only player ever inducted to the Pro Football Hall of Fame without ever playing in the NFL. (The Bills, along with the rest of the AFL, merged with the NFL the season following his retirement.) [1] [2] He is also a member of the Greater Buffalo Sports Hall of Fame and the Bills' 50th Anniversary Team.

Shaw participated in sports throughout his entire youth. He played end in high school football at a small school right outside of Vicksburg until the school decided to drop football. His father moved the family into town so Shaw could continue to play football at Carr Central. Weighing in at 188 pounds Shaw played offensive and defensive tackle at Carr his senior year. [3]

Shaw played offense while he was at Georgia Tech. By his senior year, Shaw weighed in at 220 pounds. His senior year, he earned All-American honors as a two-way tackle and was named to the Georgia Tech All-Time Team. “Actually,” Shaw once said, “l thought I played defense much better than offense, and I still believe most of the honors I received were for my defensive play.” [4] After the season, Shaw was named to the 1961 College All-Star Team. The coach worked him for two weeks as a Defensive End until guard Houston Antwine injured his ankle. This is when Shaw began playing guard. The College All-Star Team that year played the Philadelphia Eagles. "I was scared to death,” Shaw recalled about playing the NFL champion Philadelphia Eagles in the annual All-Star contest. "I was up against Ed Khayat, a Mississippi boy who later finished his career with Boston (Patriots). I thought this might ease the tension a bit since he might take it easier on me. It was just the opposite. He turned me every way but loose.” [5] Shaw played an amazing game, actually knocking the wind out of Eagle linebacker Maxie Baughan. In the 1961 draft, Shaw was drafted in the second round by the Buffalo Bills, and in the 14th round by the, then rival team of the Buffalo Bills, the Dallas Cowboys. “I had been in contact with the Cowboys mostly prior to the Bills getting involved,” recalled Shaw. “The Cowboys wanted to play me at linebacker. We had lengthy conversations at that point in time. The Bills wanted to play me at either defensive end or an offensive line position. I really wanted to play on the defensive side of the ball as a defensive end. So that triggered a real interest for me (in the Bills).” [6]

Billy Shaw was drafted by the Dallas Cowboys and the Buffalo Bills in the 1961 NFL and AFL Drafts, respectively, and decided to sign with the Bills. Shaw did well at both blocking for the pass and for the run. With Bills' running backs tending to be more durable than fast, Shaw was the perfect guard. He could stay in front of the runners far down field. Shaw was known as "the driving force of the offensive unit." [7] Shaw was a first-team All-American Football League selection four times (1963–1966) and second-team All-AFL in 1968 and 1969. He played in eight American Football League All-Star Games and was named to the All-Time All-AFL Team. He made the All-Decade All-pro football team of the 1960s. Shaw played his entire career in the American Football League, and retired after the 1969 AFL season. The 1962-1964 Bills are still ranked among the best in rushing touchdowns in a season in the team's record book.

Shaw was inducted into Pro Football Hall of Fame in 1999. During his speech, he forgot to thank his wife. After taking pictures, he went back on stage and got on his knees and apologized. [8]

The All-America Football Conference (AAFC) was a professional American football league that challenged the established National Football League (NFL) from 1946 to 1949. One of the NFL's most formidable challengers, the AAFC attracted many of the nation's best players, and introduced many lasting innovations to the game. However, the AAFC was ultimately unable to sustain itself in competition with the NFL. After it folded, three of its teams were admitted to the NFL: the San Francisco 49ers, the Cleveland Browns and the original Baltimore Colts.

David Michael Stratton was an American professional football player who was a linebacker for 12 seasons in the American Football League (AFL) and National Football League (NFL). He won two AFL championships with the Buffalo Bills, where he was a six-time AFL All-Star. He was named to the AFL All-Time Second Team. 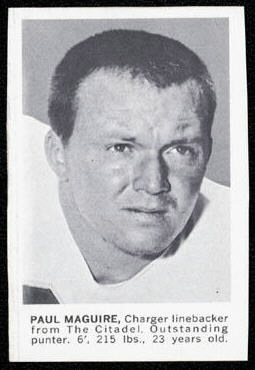 Thomas Joseph Sestak was an American football defensive lineman who played for the Buffalo Bills of the American Football League (AFL). 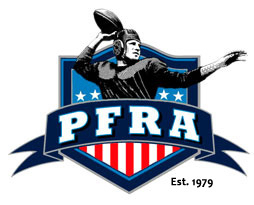 The Professional Football Researchers Association (PFRA) is an organization of researchers whose mission is to preserve and, in some cases, reconstruct professional football history. It was founded on June 22, 1979 in Canton, Ohio by writer/historian Bob Carroll and six other football researchers and is currently headed by an executive committee led by its president, George Bozeka, and executive director Leon Elder. Membership in the organization includes some of professional football's foremost historians and authors. The organization is based in Grand Island, New York.

Houston J. Antwine was a college and professional American football player from Southern Illinois University. He was drafted by the American Football League's Houston Oilers, then traded to the Boston Patriots in 1961. He is in the Southern Illinois University Athletic Hall of Fame and the Patriots Hall of Fame. A former NAIA wrestling champion, as a defensive tackle, the stocky "Twine" was nearly impossible to move out of the middle.

Albert Delane Bemiller was an American professional football player who was an offensive lineman for the Buffalo Bills of the American Football League (AFL). He played college football at Syracuse University. He was a member of two AFL championships with the Bills and was inducted into the Greater Buffalo Hall of Fame in 2015.

The 1961 National Football League draft took place at the Warwick Hotel in Philadelphia on December 27–28, 1960. The league would later hold an expansion draft for the Minnesota Vikings expansion franchise. This draft was also the first regular draft for the Dallas Cowboys as they had only participated in the 1960 NFL expansion draft that year.

Richard John Lucas is a former American football quarterback. He played college football at Pennsylvania State University from 1957 to 1959 and professionally in the American Football League (AFL) with the Buffalo Bills from 1960 to 1961 and the Denver Broncos in 1962.

Chester A. Mutryn was a professional American football halfback and defensive back in the All-America Football Conference and the National Football League. He was drafted by the Philadelphia Eagles in the 20th round of the 1943 NFL Draft.

The 1961 Buffalo Bills season was the team's second year in the American Football League. The Bills played in the Eastern division, winning six games, losing eight, and missing the postseason.