Brooke Bond is a brand of tea owned by Unilever, formerly an independent tea-trading and manufacturing company in the United Kingdom, known for its PG Tips brand and its Brooke Bond tea cards.

Brooke Bond & Company was founded by Arthur Brooke, who was born at 6 George Street, Ashton-under-Lyne, Lancashire, England, in 1845. In 1869 he opened his first tea shop at 23 Market Street, Manchester. [1] Brooke chose the business name because it was his 'bond' to his customers to provide quality teas, hence Brooke Bond. The firm expanded into wholesale tea sales in the 1870s. [1]

The company opened a packing factory in Goulston Street, Stepney, London, in 1911. [3]

Brooke Bond's most famous brand is PG Tips, launched in 1930. [4] By 1957, Brooke Bond was probably the largest tea company in the world, with one third share of both the British and Indian tea markets. [5]

The company merged with Liebig in 1968, becoming Brooke Bond Liebig, which was acquired by Unilever in 1984. The Brooke Bond name was significantly decreased by Unilever, however, the Brooke Bond tea brand was reintroduced on sale in 2019 in the UK after a 20 year absence.

Gold Crown Foods Ltd was licensed by Unilever to use the Brooke Bond name for the Brooke Bond 'D' and Brooke Bond Choicest brands. [6] Today, the licence for D Tea is held by Typhoo, who used to sell it through their website – it had identical packaging to before minus the words 'Brooke Bond' - although it is not currently available. It was also regularly sold across Britain in Poundland stores. The Brooke Bond brand is still used in other countries, especially in India. In Pakistan, Brooke Bond Supreme is the number-one-selling tea brand. Unilever markets it as being stronger than its Lipton Yellow Label blend.

In North America Brooke Bond's primary product was Red Rose Tea. Red Rose is still sold by Unilever in Canada, but in the United States is now marketed by Redco Foods.

The Brooke Bond factory is at Trafford Park near Manchester. [4]

Brooke Bond Taj Mahal tea leaves are grown in estates of Upper Assam, Darjeeling and Tripura. It grows on the northern banks of the great Brahmaputra, which floods its banks every monsoon, creating a rich, humid soil. There is plentiful rain in the monsoon and humidity lasts through the year. The soil and weather together give Assam Tea its 'terroir' – a dark red brew, a strong malty flavor and deep body.

Brooke Bond Red Label, the Indian blend, is made in tea manufacturing units of Assam, Coochbehar, Darjeeling and some parts of Meghalaya. The manufacturing process of tea includes the stages of withering (leaving tea leaves to dry), rolling/cutting (through which complex series of chemical changes known as oxidation are initiated), drying and then grading into sizes.

Brooke Bond Supreme is imported to Pakistan, made from Kenyan tea leaves.

From 1954 until 1999, packets of Brooke Bond tea included illustrated cards, usually 50 in a series, which were collected by many children. One of the most famous illustrators of the cards was Charles Tunnicliffe, the internationally acclaimed bird painter. Most of the initial series were wildlife-based, including 'British Wild Animals', 'British Wild Flowers', 'African Wild Life', 'Asian Wild Life', and 'Tropical Birds'. From the late 1960s, they included historical subjects, such as 'British Costume', 'History of the Motor Car', and 'Famous Britons'. The last series in the 1990s concentrated on the Chimps of the TV adverts. Complete sets and albums in good condition are highly sought after collectors' items. The inclusion of these cards in packets of tea ceased in 1999. There were about 85 separate titles [7] issued around the world: 59 series issued in the UK (1954–1999), 17 series in Canada (1959–1974; 7 of these were also issued in the US, 1960–66), 6 series in what was Rhodesia (1962–66), and 3 series in South Africa (1965–67). Many of them have since been reprinted.

set no / Title / year of issue / number of cards in set 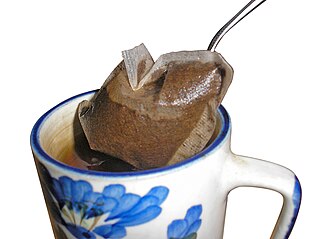 A tea bag is a small, porous, sealed bag or packet, typically containing tea leaves, which is immersed in water to steep and make an infusion. Originally used only for tea, they are now made with other tisanes as well. 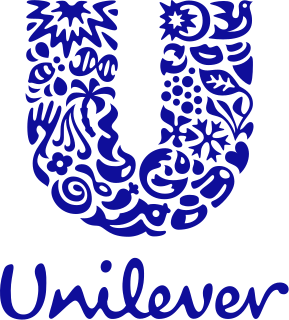 Unilever is a British-Dutch multinational consumer goods company co-headquartered in London, England, and Rotterdam, Netherlands. Its products include food, energy drink, ice cream, tea, cleaning agents, beauty products, and personal care products. Unilever is the largest producer of soap in the world. Unilever is one of the oldest multinational companies; its products are available in around 190 countries. 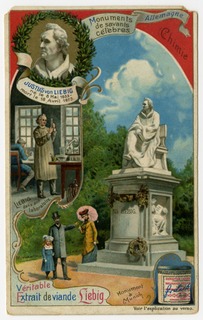 Monkey, is an animated puppet advertising character in the form of a knitted sock monkey. He was first produced by The Jim Henson Company via their UK Creature Shop, puppeteered by Nigel Plaskitt and Susan Beattie and voiced by comedian Ben Miller.

Tetley is a beverage manufacturer founded in 1837 in Yorkshire, England. It is the largest tea company in the United Kingdom and Canada, and the second largest in the United States by volume.

PG Tips is a brand of tea in the United Kingdom, manufactured by Unilever UK.

Yorkshire Tea is a black tea blend produced by the Bettys & Taylors Group since 1977. It is the most popular traditional black tea brand sold in the UK. In 1886 Charles Edward Taylor Founded CE Taylor & Co., later shortened to "Taylors", the company was purchased by 'Betty's Tea Rooms' which today forms Bettys & Taylors Group. Taylors of Harrogate is still based in Harrogate, Yorkshire, in the first 'Betty's' tea room. The group is still owned by the family of Bettys' founder, Fredrick Belmont and is currently chaired by Lesley Wild. The company is one of the few remaining family tea and coffee merchants in the country, whilst competing with the British-owned PG Tips (Unilever) and Tetley (Tata), where Yorkshire Tea is now the most purchased tea brand in the UK, overtaking Twinings and Typhoo. 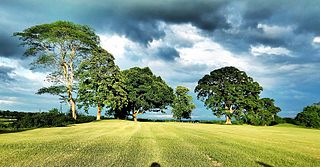 Tinsukia district (pronounced:ˌtɪnˈsʊkiə) is one of the 33 administrative districts in the state of Assam, India. The district headquarters is located at Tinsukia city. The district occupies an area of 3790 km2. 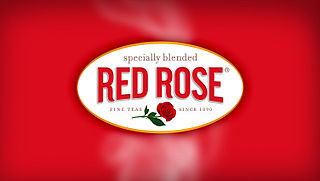 Red Rose Tea is a beverage company established by Theodore Harding Estabrooks in 1894 in Saint John, New Brunswick, Canada. Estabrooks began his career in trade imports and exports, and soon moved specifically to the tea trade. Realizing the inconsistency in loose leaf servings, Estabrooks began packaging his tea leaves into single-serving bags to ensure quality and consistency in every teacup. 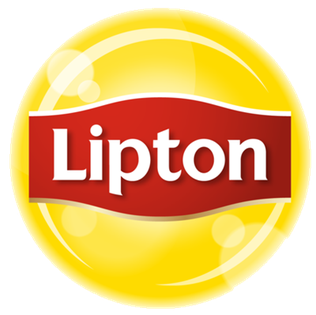 Lipton is a British brand of tea, owned by Unilever. Lipton was also a supermarket chain in the United Kingdom before it was sold to Argyll Foods, to allow the company to focus solely on tea. The company is named after its founder Thomas Lipton. The Lipton ready-to-drink beverages are sold by Pepsi Lipton International, a company jointly owned by Unilever and PepsiCo.

Meghamalai, popularly called the Highwavy Mountains, is a mountain range located in the Western Ghats in the Theni district, Tamil Nadu near Kumily, Kerala. It is dotted with cardamom plantations and tea estates. The mountain range is situated at an elevation of 1,500m above sea level and is rich in flora and fauna. The area, now mostly planted with tea plants, includes Cloudlands, Highwavys, Venniar and the Manalar estates, belonging to the Woodbriar Group. Currently, access is largely restricted and includes largely untouched remnants of evergreen forest. 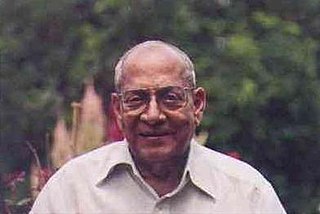 Robin Banerjee was a noted wildlife expert, environmentalist, painter, photographer and documentary filmmaker who lived at Golaghat in the Indian state of Assam. 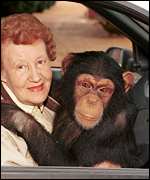 Molly Winifred Badham MBE was a co-founder of Twycross Zoo. She trained the chimpanzees who appeared on the Brooke Bond PG Tips television advertisements in the 1960s to the 1980s.

India is the second largest producer of tea in the world after China, including the famous Assam tea and Darjeeling tea. Tea is the 'State Drink' of Assam. Following this the former Planning Commission Deputy Chairman, Montek Singh Ahluwalia had plans to officially recognise tea as the Indian "National Drink" in 2013. According to the ASSOCHAM report released in December 2011, India is the world's largest consumer of tea, consuming nearly 30% of global output. India is also the second-largest exporter of tea, after China.

Tata Consumer Products Limited, formerly Tata Global Beverages Limited, is an Indian multinational non-alcoholic beverages company headquartered in Mumbai, Maharashtra, India and a subsidiary of the Tata Group. It is the world's second-largest manufacturer and distributor of tea and a major producer of coffee. 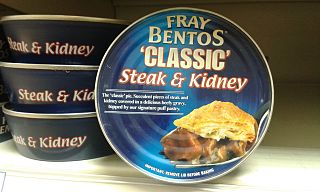 The Fray Bentos food brand is associated with tinned processed meat products, originally corned beef and, latterly, meat pies. The brand has been sold in the United Kingdom, other European countries, and Australia. Created in the latter half of the 19th century, the name is derived from the port of Fray Bentos in Uruguay where the products were originally processed and packaged until the 1960s. The brand is now owned in the UK by Baxters, which manufactures the product range in Scotland. Additionally, the Campbell Soup Company manufactures and sells Fray Bentos branded steak and kidney pies in Australia.