Ginger Bar, a former banana-shipping station on the outskirts of the Panama Canal, had been converted to a training-and-relay station for the U. S. Army. The Commander Merrill (Stanley Andrews), an ex-service flier, is in charge of the station It is his job to train civilian airmen to handle bombers, transforming them into pilots of the "flying fortresses. They will fly bombers to Africa and back for further training.

As one of a new group of pilot, the conceited, reckless society playboy, Harley Ames (John Hubbard), arrives at Ginger Bar. The others include Kincaid (Larry Parks), from Alabama, Madigan (Forrest Tucker), an ex- marine; Hughes, a former player with the Brooklyn Dodgers and Baldwin (Lloyd Bridges), a former insurance agent who trained with the Civil Aeronautics Board.

Although he is a capable pilot, Ames immediately incurs the animosity of the training-officer, "Hardtack" Hamilton (Chester Morris). Not only is Ames reckless, he is also making a play for Susan Merril (Harriet Hilliard), the Commanding Officer's daughter with whom "Tack" is in love.

Because of a broken date by Susan, Ames gets drunk and, the next day, crashes his aircraft on combat training crashing his aircraft into Kincaid's, killing his friend. Now, he must redeem himself. He will get a chance when "Tack" and another pilot have a crash in the jungle. Ames, knowing that Susan is in love with Tack, takes off without orders He locates Tack in the jungle and brings him safely home to Susan. When the squadron takes off again, Ames leaves for Africa, declaring that he intends to find a little excitement there.

Canal Zone was based on the short story "Heroes Come High" by Blaine Miller and Jean Dupont Miller in American Magazine (February 1937). [1]

Theodore Stauss, film reviewer for The New York Times thought Canal Zone, "silly". "The characters of their Central American relay and training station are too silly to find their bearings in a third-rate drama, much less in the air. Though there is some highfalutin' talk about destiny and 'kicking the sky around,' the story of "Canal Zone" never gets its wheels off the ground." [2] 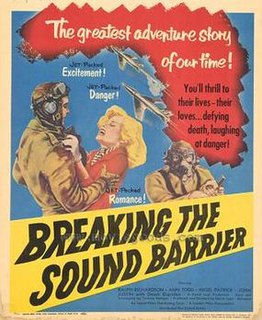 The Sound Barrier is a 1952 British aviation drama film directed by David Lean. It is a fictional story about attempts by aircraft designers and test pilots to break the sound barrier. It was David Lean's third and final film with his wife Ann Todd, but it was his first for Alexander Korda's London Films, following the break-up of Cineguild. The Sound Barrier stars Ralph Richardson, Ann Todd, and Nigel Patrick. It was known in the United States as Breaking Through the Sound Barrier and Breaking the Sound Barrier. 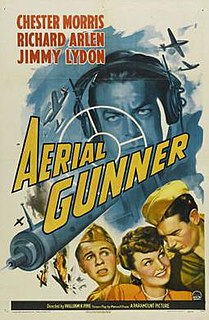 Sky Patrol is a 1939 American film directed by Howard Bretherton and starring John Trent, along with Marjorie Reynolds, Milburn Stone and Jason Robards Sr. The film also featured actor and comedian Jackie Coogan, who began his film career as a child actor in silent films.

Give Us Wings is a 1940 Universal comedic film starring the Dead End Kids and the Little Tough Guys. Several members of the casts of those series were also featured in "The East Side Kids" films.

Sabre Jet is a 1953 American Korean War war film drama directed by Louis King starring Robert Stack, Coleen Gray, Richard Arlen, Julie Bishop and Leon Ames. Shot in Cinecolor using United States Air Force footage. Sabre Jet was based on a story by the producer Carl Krueger with the screenplay written by the husband and wife playwright and screenwriting team of Dale Eunson and Katherine Albert. The opening credits state: "This picture is dedicated to the air force wives who shared their men with a world made desperate by the most brutal aggressor in history." 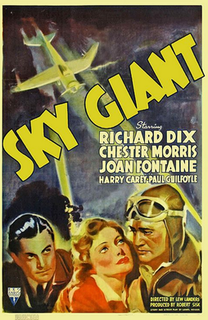 The Skywayman was a 1920 American silent action drama film directed by James P. Hogan and produced and distributed by Fox Film Corporation. The film starred noted aerial stunt pilot Ormer Locklear and Louise Lovely. After having appeared in The Great Air Robbery (1919), a film that showcased his aerial talents, Locklear, considered the foremost "aviation stunt man in the world", was reluctant to return to the air show circuit. During the production, Locklear and his co-pilot Milton "Skeets" Elliot died after crashing during a night scene. The Skywayman was subsequently released shortly after, capitalizing on their deaths.

Arctic Flight is a 1952 drama film directed by Lew Landers and starring Wayne Morris, Alan Hale Jr. and Lola Albright. It was produced by Monogram Pictures. Arctic Flight depicts bush pilot flying in the Arctic on the edge of the International Date Line, involving Soviet intrigue. 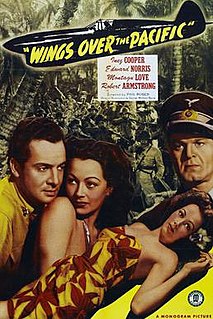 The Broken Wing is a 1923 American silent aviation comedy drama film directed by Tom Forman based on the play The Broken Wing by Paul Dickey and Charles W. Goddard. The film stars Kenneth Harlan, Miriam Cooper, and Walter Long. The Broken Wing was released on August 19, 1923.. 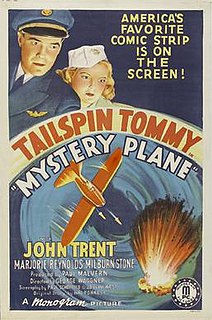