The Cat is the fourth animal symbol in the 12-year cycle of the Vietnamese zodiac and Gurung zodiac, taking place of the Rabbit in the Chinese zodiac. [1] As such, the traits associated with the Rabbit are attributed to the Cat. Cats are in conflict with the Rat.

Legends relating to the order of the Chinese zodiac often include stories as to why the cat was not included among the twelve. Because the Rat tricked the cat into missing the banquet with the Jade Emperor, the cat was not included and was not aware that the banquet was going on and was not given a year, thus began the antipathy between cats and rats. It is possible domesticated cats had not proliferated through China at the zodiac's induction. [2]

Another legend known as "The Great Race" tells that all the animals in the zodiac were headed to the Jade Emperor. The Cat and Rat were the most intelligent of the animals, however they were both also poor swimmers and came across a river. They both tricked the kind, naive Ox to assist them by letting them ride on its back over the river. As the Ox was approaching the other side of the river, the Rat pushed the Cat into the river, then jumped off the Ox and rushed to the Jade Emperor, becoming the first in the zodiac. All the other animals made it to the Jade Emperor, while the Cat was left to drown in the river after being sabotaged by the Rat. It is said that this is also the reason cats always hunt Rats.

There have been various explanations of why the Vietnamese, unlike all other countries who follow the Sino lunar calendar, have the cat instead of the Rabbit as a zodiac animal. The most common explanation is that the ancient word for "rabbit" (mao) sounds like "cat" (meo). [3]

People born within the date ranges below can be said to have been born under the "Year of the Cat", instead of "Year of the Rabbit". [4] [5] 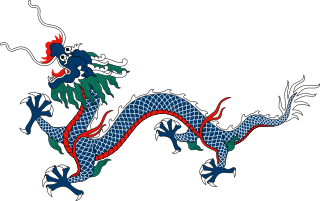 A Chinese dragon, also known as Long or Lung, is a legendary creature in Chinese mythology, Chinese folklore, and Chinese culture at large. Chinese dragons have many animal-like forms such as turtles and fish, but are most commonly depicted as snake-like with four legs. They traditionally symbolize potent and auspicious powers, particularly control over water, rainfall, typhoons, and floods. The dragon is also a symbol of power, strength, and good luck for people who are worthy of it in East Asian culture. During the days of Imperial China, the Emperor of China usually used the dragon as a symbol of his imperial strength and power. In Chinese culture, excellent and outstanding people are compared to a dragon, while incapable people with no achievements are compared to other, disesteemed creatures, such as a worm. A number of Chinese proverbs and idioms feature references to a dragon, such as "Hoping one's child will become a dragon". 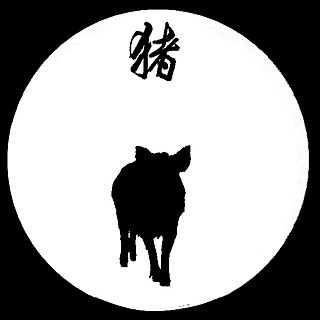 The Pig (豬) is the twelfth of the 12-year cycle of animals which appear in Chinese zodiac, in relation to the Chinese calendar and system of horology, and paralleling the system of ten Heavenly Stems and twelve Earthly Branches. Although the term "zodiac" is used in the phrase "Chinese zodiac", there is a major difference between the Chinese usage and Western astrology: the zodiacal animals do not relate to the zodiac as the area of the sky that extends approximately 8° north or south of the ecliptic, the apparent path of the Sun, the Moon, and visible planets across the celestial sphere's constellations, over the course of the year. 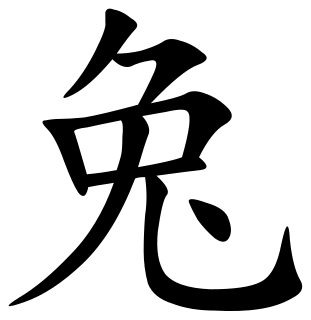 The Rabbit (兔) is the fourth in the 12-year cycle of animals that appear in the Chinese zodiac related to the Chinese calendar. The Year of the Rabbit is associated with the Earthly Branch symbol 卯.

The Dragon is the fifth of the 12-year cycle of animals which appear in the Chinese zodiac related to the Chinese calendar. The Year of the Dragon is associated with the Earthly Branch symbol 辰, pronounced chen. 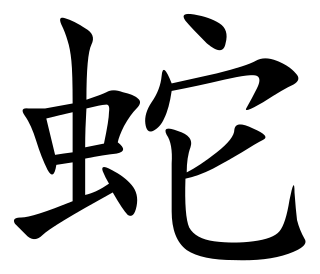 The Snake (蛇) is the sixth of the 12-year cycle of animals which appear in the Chinese zodiac related to the Chinese calendar. The Year of the Snake is associated with the Earthly Branch symbol 巳. 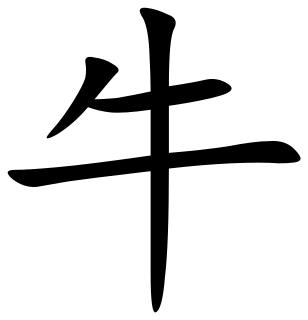 The Ox (牛) is the second of the 12-year periodic sequence (cycle) of animals which appear in the Chinese zodiac related to the Chinese calendar, and also appears in related calendar systems. The Chinese term translated here as ox is in Chinese niú (牛), a word generally referring to cows, bulls, or neutered types of the bovine family, such as common cattle or water buffalo. The zodiacal ox may be construed as male, female, neutered, hermaphroditic, and either singular or plural. The Year of the Ox is also denoted by the Earthly Branch symbol chǒu (丑). The term "zodiac" ultimately derives from an Ancient Greek term referring to a "circle of little animals". There are also a yearly month of the ox and a daily hour of the ox. Years of the oxen (cows) are cyclically differentiated by correlation to the Heavenly Stems cycle, resulting in a repeating cycle of five years of the ox/cow, each ox/cow year also being associated with one of the Chinese wǔxíng, also known as the "five elements", or "phases": the "Five Phases" being Fire, Water, Wood, Metal, and Earth. The Year of the Ox follows after the Year of the Rat which happened in 2020 and it then is followed by the Year of the Tiger, which will happen in 2022. 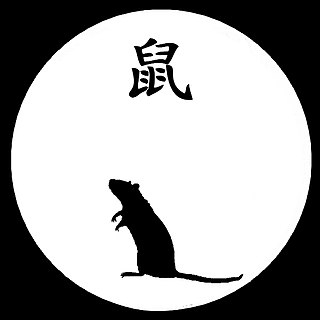 The Rat or Mouse (鼠) is the first of the repeating 12-year cycle of animals which appear in the Chinese zodiac, constituting part of the Chinese calendar system. The Year of the Rat in standard Chinese is ; the rat is associated with the first branch of the Earthly Branch symbol 子 (zǐ), which starts a repeating cycle of twelve years. The Chinese word shǔ (鼠) refers to various types of Muroidea, such as rats and mice. The term "zodiac" ultimately derives from an Ancient Greek term referring to a "circle of little animals". There are also a yearly month of the rat and a daily hour of the rat. Years of the rat are cyclically differentiated by correlation to the Heavenly Stems cycle, resulting in a repeating cycle of five years of the rat, each rat year also being associated with one of the Chinese wu xing, also known as the "five elements", or "phases": the "Five Phases" being Fire, Water, Wood, Metal, and Earth.

The Vietnamese zodiac is the traditional Vietnamese classification scheme based on the lunar calendar that assigns an animal and its reputed attributes to each year in a repeating 12-year cycle. Instead of centuries, the Viet lunar calendar is divided into 60-year cycles known as hồi. Each of these consists of five 12-year animal cycles. 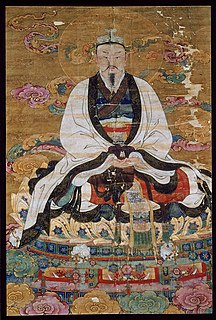 In Western astrology, astrological signs are the twelve 30° sectors of the ecliptic, starting at the vernal equinox, also known as the First Point of Aries. The order of the astrological signs is Aries, Taurus, Gemini, Cancer, Leo, Virgo, Libra, Scorpio, Sagittarius, Capricorn, Aquarius and Pisces. Each sector was named for a constellation within it in the time of naming. These divisions were also used in scientific astronomy until the 19th century in some cases; see ecliptic coordinates.

Zodiac: The Race Begins is a CGI film produced by Singapore's Cubix Pictures. The film was released in the city state on January 26, 2006.

Tai Sui is a Chinese term for the stars directly opposite the planet Jupiter during its roughly 12-year orbital cycle. Personified as deities, they are important features of Chinese astrology, Feng Shui, Taoism, and Chinese Buddhism to a lesser extent.

In 1981, China began minting coins to commemorate the Chinese New Year. The Chinese lunar series consist of gold, silver, and platinum coins in a variety of sizes, denominations, and shapes. The reverse of each coin depicts the zodiac animal for the corresponding year of issue, while the obverse features an historical building or other notable cultural image.

The Haiyantang was an area in the Xiyang Lou of the Old Summer Palace, which included the famous Zodiac Fountain - water clock fountain consisting of 12 bronze Chinese zodiac statues. Supposedly designed by Giuseppe Castiglione for the Qianlong Emperor, the statues would spout out water from their mouths to tell the time. 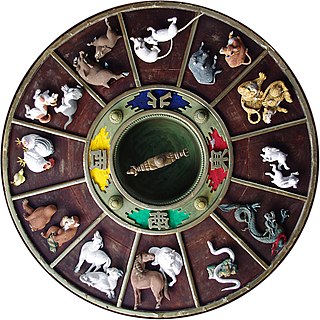 The Chinese zodiac is a classification scheme based on the lunar calendar that assigns an animal and its reputed attributes to each year in a repeating 12-year cycle. The 12-year cycle is an approximation to the 11.85-year orbital period of Jupiter. Originating from China, the zodiac and its variations remain popular in many East Asian and Southeast Asian countries, such as Japan, South Korea, Vietnam, Cambodia, and Thailand.

Circle of Animals/Zodiac Heads is an artwork by Chinese contemporary artist and political commentator, Ai Weiwei. The work comes in a small (gold) and large (bronze) version.

Oxen, cows, beef cattle, buffalo and so on are an important motif in Chinese mythology. There are many myths about the oxen or ox-like beings, including both celestial and earthly varieties. The myths range from ones which include oxen or composite beings with ox characteristics as major actors to ones which focus on human or divine actors, in which the role of the oxen are more subsidiary. In some cases, Chinese myths focus on oxen-related subjects, such as plowing and agriculture or ox-powered carriage. Another important role for beef cattle is in the religious capacity of sacrificial offerings.