The Cherry Avenue Bridge (North Avenue railroad bridge, or Chicago, Milwaukee & St. Paul Railway, Bridge No. Z-2) is an asymmetric bob-tail swing bridge in Chicago, Illinois that carries the Chicago Terminal Railroad, pedestrians, and cyclists across the North Branch Canal of the Chicago River. It was constructed in 1901–02 by the Chicago, Milwaukee and St. Paul Railway, and it is a rare example of this type of bridge; it was designated a Chicago Landmark on December 12, 2007. [2] 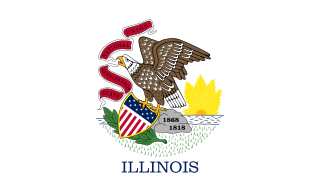 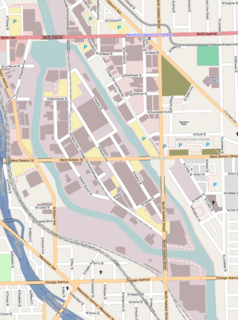 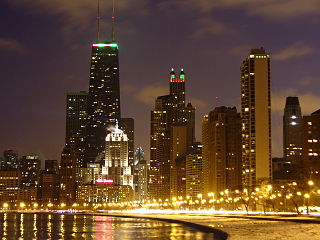 The Near North Side is one of 77 defined community areas of Chicago, Illinois, United States. It is the northernmost of the three areas that constitute central Chicago, the others being the Loop and the Near South Side. The community area is located north and east of the Chicago River. To its east is Lake Michigan, and its northern boundary is the early 19th-century city limit of Chicago, North Avenue. Of the downtown community areas, the Near North Side has the second-largest total area after the Near West Side, the highest number of skyscrapers, and the largest population. With the exception of Goose Island and the remnants of Cabrini–Green, to the west, the Near North Side is known for its extreme affluence, typified by the Magnificent Mile, Gold Coast, Navy Pier, and its world-famous skyscrapers. 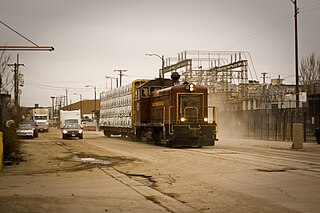 The Chicago Terminal Railroad was a switching and terminal railroad that operated over former Milwaukee Road/Canadian Pacific and Chicago and North Western/Union Pacific trackage in northern Illinois. The railroad began its operations on January 2, 2007. The railroad rostered a total of three locomotive units, all of EMD design.

Goose Island is a man-made island on the north branch of the Chicago River that was formed in the 1850s by the digging of the North Branch Canal. [3] In 1871 the Chicago and Pacific Railroad started construction of a railroad from Goose Island through Elgin, Illinois to Byron, Illinois. [4] This company was absorbed into the Chicago, Milwaukee and St. Paul Railway in 1880. [5] The Cherry Avenue bridge was constructed in 1901–02 [1] by the Chicago, Milwaukee and St. Paul to replace a 20-year-old bridge on the same location. [6] It spans the North Branch Canal of the Chicago River providing the only railroad access to Goose Island. [7] 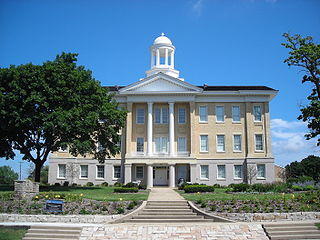 Elgin is a city in Cook and Kane counties in the northern part of the U.S. state of Illinois. Located roughly 35 mi (56 km) northwest of Chicago, it lies along the Fox River. As of 2017, the city had an estimated population of 112,456, making it the eighth-largest city in Illinois.

Byron is a city in Ogle County, Illinois, United States, probably best known as the location of the Byron Nuclear Generating Station, one of the last nuclear power plants commissioned in the United States. Byron is located in Byron Township, along the Rock River. The population was 3,753 at the 2010 census, up from 2,917 at the 2000 census. The town bills itself as the "Gateway to the Rock River Valley".

Railroad operation on Goose Island was taken over by the Soo Line Railroad in 1986, and then by the Chicago Terminal Railroad in January 2007. The bridge was purchased by the City of Chicago in 2008, [8] and restored in 2008–09 adding new decking and lights to enable safe pedestrian access. [9] 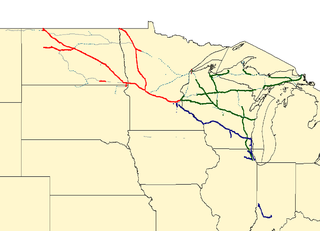 The Soo Line Railroad is the primary United States railroad subsidiary of the Canadian Pacific Railway, one of seven U.S. Class I railroads, controlled through the Soo Line Corporation. Although it is named for the Minneapolis, St. Paul and Sault Ste. Marie Railroad (MStP&SSM), which was commonly known as the Soo Line after the phonetic spelling of Sault, it was formed in 1961 by the consolidation of that company with two other CP subsidiaries: The Duluth, South Shore and Atlantic Railroad, and the Wisconsin Central Railroad. It is also the successor to other Class I railroads, including the Minneapolis, Northfield and Southern Railway, and the Chicago, Milwaukee, St. Paul and Pacific Railroad. On the other hand, a large amount of mileage was spun off in 1987 to Wisconsin Central Ltd., now part of the Canadian National Railway. The Soo Line and the Delaware and Hudson Railway, the CP's other major subsidiary, presently do business as the Canadian Pacific Railway, and most equipment has been repainted into the CP scheme, but the U.S. Surface Transportation Board groups all of CP's U.S. subsidiaries under the Soo Line name for reporting purposes. The Minneapolis headquarters are located in the Canadian Pacific Plaza building, having moved from the nearby Soo Line Building.

The bridge is one of two bob-tail swing bridges constructed by the Chicago, Milwaukee & St. Paul Railway on the North Branch of the Chicago River. [10] The bridge runs north-south, the pivot pier is on the shore on the north side of the channel with a 134.5-foot (41.0 m) long, 40-foot (12 m) heigh Pratt truss arm that spans the channel, and a 70-foot (21 m) arm that carries the 280,000-pound (130,000 kg) counter-weight 20 feet (6.1 m) above the tracks. [1] [6] The bridge is no longer operable, but when constructed it was able to swing to the east, to an angle of 82.5˚ when parallel to the dock wall. [1] The bridge was designed to carry a single railroad track, but also may originally have been intended for use by other vehicular traffic on Cherry Avenue. [1] A sidewalk is cantilevered from the east side of the bridge.

William Butler Ogden was an American politician and railroad executive who served as the first Mayor of Chicago. He was referred to as "the Astor of Chicago." 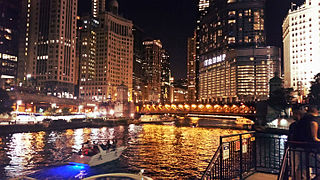 The Milwaukee River is a river in the state of Wisconsin. It is about 104 miles (167 km) long. Once a locus of industry, the river is now the center of a housing boom. New condos now crowd the downtown and harbor districts of Milwaukee attracting young professionals to the area. The river is also ribboned with parks as it winds through various neighborhoods. Kayaks and fishing boats share the river with party boats. An extensive Riverwalk featuring art displays, boat launches and restaurants lines its banks in downtown Milwaukee.

The Bloomingdale Line was a 2.7-mile (4.3 km) elevated railroad running east-west on the northwest side of Chicago. In 2015, the City of Chicago converted it into an elevated greenway called The Bloomingdale Trail, which forms the backbone of the linear park and trail network called The 606. This elevated park passes through the Chicago neighborhoods of Logan Square, Humboldt Park, and West Town.

The Crescent Bridge carries a rail line across the Mississippi River between Davenport, Iowa and Rock Island, Illinois. It was formerly owned by the Davenport, Rock Island and North Western Railway, a joint subsidiary of the Chicago, Burlington and Quincy Railroad and Chicago, Milwaukee, St. Paul and Pacific Railroad, which was split in 1995 between then-joint owners Burlington Northern Railroad and Soo Line Railroad, with BN getting the bridge and the Illinois-side line, and Soo Line getting the Iowa-side line. Since then, after spinning off its lines in the area to I&M Rail Link, later Iowa, Chicago and Eastern Railroad, the lines were repurchased by the Canadian Pacific Railway, parent of the Soo Line. Meanwhile, BN has merged into the BNSF Railway, the current owner of the bridge.

The Short Line Bridge is a truss bridge that spans the Mississippi River in Minneapolis, Minnesota, United States. It was originally built in the 1880s and upgraded a few years later by Chicago, Milwaukee, St. Paul and Pacific Railroad and was designed by American Bridge Company. 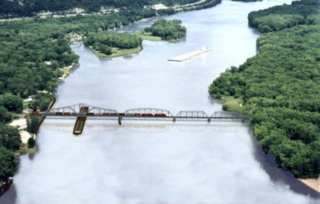 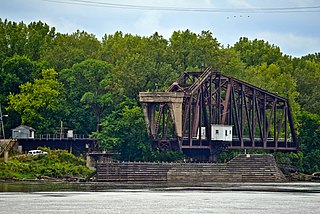 Omaha Road Bridge Number 15 is a swing bridge that spans the Mississippi River in St. Paul, Minnesota, United States. It was built in 1915 by the Chicago, St. Paul, Minneapolis and Omaha Railway, though it, and the line from St. Paul to Mendota, was jointly owned with the Chicago, Milwaukee and St. Paul Railway. The causeway curves around Pickerel Lake in Lilydale, Minnesota, before crossing into St. Paul. 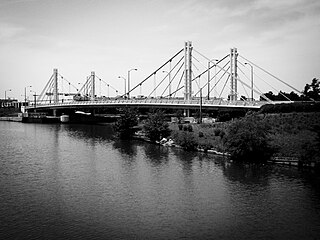 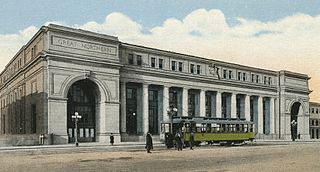 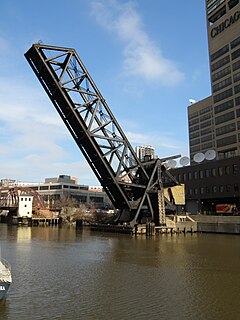 The Chicago and North Western Railway's Kinzie Street railroad bridge is a single leaf bascule bridge across the north branch of the Chicago River in downtown Chicago, Illinois. At the time of its opening in 1908 it was the world's longest and heaviest bascule bridge. Previous bridges on the same site included the first bridge to cross the Chicago River, Chicago's first railroad bridge, and one of the first all-steel bridges in the United States. 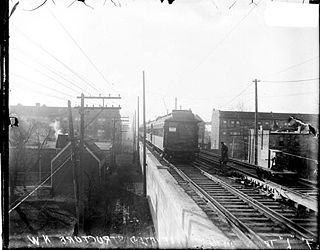 The Northwestern Elevated Railroad was the last of the privately constructed rapid transit lines to be built in Chicago. The line ran from the Loop in downtown Chicago north to Wilson Avenue in Chicago's Uptown neighborhood with a branch to Ravenswood and Albany Park that left the main line at Clark Street. The Ravenswood line is now operated as the Brown Line, while the Main Line is used by the Purple and Red Lines.