Prior to its designation as a landmark, the building had long been slated for demolition, [4] and its sub-basements were damaged by the 1992 Chicago Flood. A real estate developer purchased the building and, by adding two additional interior floors, re-developed the structure into a mixed-use office and retail building. [5] The renovations won the Best Adaptive Reuse award from Landmarks Illinois in 2007. [6] 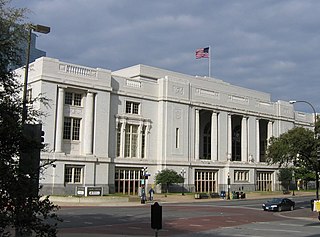 Dallas Union Station, officially Eddie Bernice Johnson Union Station, also known as Dallas Union Terminal, is a railroad station in Dallas, Texas. It serves DART Light Rail, Trinity Railway Express commuter rail, and Amtrak intercity rail. It is located on Houston Street, between Wood and Young Streets, in the Reunion district of Downtown Dallas. The structure is a Dallas Landmark and is listed on the National Register of Historic Places. 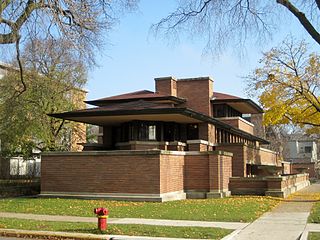 The Frederick C. Robie House is a U.S. National Historic Landmark now on the campus of the University of Chicago in the South Side neighborhood of Hyde Park in Chicago, Illinois. Built between 1909 and 1910, the building was designed as a single family home by architect Frank Lloyd Wright and is renowned as the greatest example of Prairie School, the first architectural style considered uniquely American. It was designated a National Historic Landmark on November 27, 1963, and was on the first National Register of Historic Places list of October 15, 1966. Robie House and a selection of other properties by Wright were inscribed on the World Heritage List under the title "The 20th-Century Architecture of Frank Lloyd Wright" in July 2019.

Austin is one of seventy-seven officially designated community areas in Chicago, Illinois. Located on the city's West Side, it is the second largest community area by population and the second-largest geographically. Austin's eastern boundary is the Belt Railway located just east of Cicero Avenue. Its northernmost border is the Milwaukee District / West Line. Its southernmost border is at Roosevelt Road from the Belt Railway west to Austin Boulevard. The northernmost portion, north of North Avenue, extends west to Harlem Avenue, abutting Elmwood Park. In addition to Elmwood Park, Austin also borders the suburbs of Cicero and Oak Park.

Dearborn Station was the oldest of the six intercity train stations serving downtown Chicago, Illinois. Located at Dearborn and Polk Streets, adjacent to Printers Row, the station was owned by the Chicago & Western Indiana Railroad, which itself was owned by the companies operating over its line. The station is now a shopping mall housing office, retail and entertainment space. 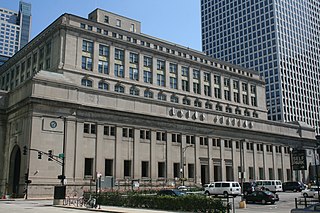 Chicago Union Station is an intercity and commuter rail terminal located in the West Loop Gate neighborhood of Chicago, Illinois. The station serves as Amtrak's flagship station in the Midwest, serving intercity trains, and is also the downtown terminus for six Metra commuter lines. The station stands on the west side of the Chicago River between West Adams Street and West Jackson Boulevard, just outside the Chicago Loop. Including approach and storage tracks, it covers about nine and a half city blocks.

The Richard B. Ogilvie Transportation Center is a commuter rail terminal in downtown Chicago, Illinois. It is the terminus for the three commuter rail lines of Metra's Union Pacific District to Chicago's northern and western suburbs, which approach the terminal elevated above street level. It occupies the lower floors of the 500 West Madison Street building. The building occupies two square city blocks, bounded by Randolph Street and Madison Street to the north and south and by Canal Street and Clinton Street to the east and west. It is the second busiest rail station in Chicago, after nearby Chicago Union Station, the sixth-busiest railway station in North America, and the third-busiest station that exclusively serves commuter traffic. 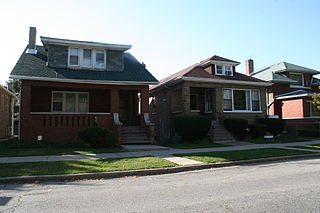 Chatham is one of the 77 community areas of the city of Chicago, Illinois. It is located on the city's South Side. It includes the neighborhoods of Chatham-Avalon, Chatham Club, Chesterfield, East Chatham, West Chatham and the northern portion of West Chesterfield. Its residents are predominantly African American, and it is home to former Senator Roland Burris. Housing many city employees and other officials, Chatham has been a central area for Chicago's middle-class African Americans since the late 1950s.

The James Charnley Residence, also known as the Charnley-Persky House, is a historic house museum at 1365 North Astor Street in the Gold Coast neighborhood of Chicago, Illinois. Built in 1892, it is one of the few surviving residential works of Louis Sullivan, and features major contributions by Frank Lloyd Wright, who was then working as a draftsman in Sullivan's office. The house is owned and operated as a museum and organization headquarters by The Society of Architectural Historians (SAH). It was designated a National Historic Landmark in 1998, and is listed on the National Register of Historic Places.

The Union Station, at 801 South 10th Street in Omaha, Nebraska, known also as Union Passenger Terminal, is "one of the finest examples of Art Deco architecture in the Midwest." Designated an Omaha Landmark in 1978, it was listed as "Union Passenger Terminal" on the National Register of Historic Places in 1971, and was designated a National Historic Landmark in 2016. The Union Station is also a contributing property to the Omaha Rail and Commerce Historic District. It was the Union Pacific's first Art Deco railroad station, and the completion of the terminal "firmly established Omaha as an important railroad terminus in the Midwest." 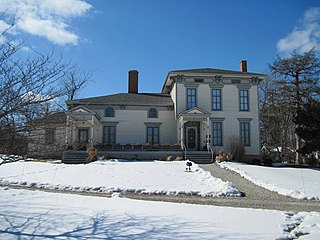 The Noble–Seymour–Crippen House is a mansion located at 5624 North Newark Avenue in Chicago's Norwood Park community area. Its southern wing, built in 1833, is widely considered the oldest existing building in Chicago. 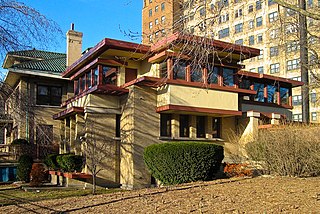 The Emil Bach House is a Prairie style house in the Rogers Park neighborhood of Chicago, Illinois, United States that was designed by famous architect Frank Lloyd Wright. The house was built in 1915 for an admirer of Wright's work, Emil Bach. Bach was co-owner of the Bach Brick Company. The house is representative of Wright's late Prairie style and is an expression of his creativity from a period just before his work shifted stylistic focus. The Bach House was declared a Chicago Landmark on September 28, 1977, and was added to the U.S. National Register of Historic Places on January 23, 1979. 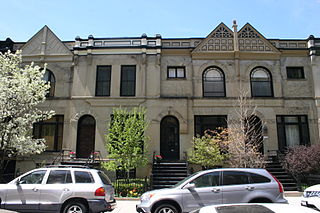 The Henry Gerber House is located on North Crilly Court in the Old Town neighborhood of Chicago, Illinois, United States. It is a single-family brick row house built in 1885 in the Queen Anne style, mostly intact from that time. In the 1920s it housed the apartment occupied by German-born Henry Gerber, founder of the short-lived Society for Human Rights, which was incorporated in Illinois as the first American organization working for gay rights. Inspired by nascent gay-rights organizations he had seen in Germany, Gerber held meetings here and published newsletters, the first known gay civil rights periodicals in the country, for a year until the Chicago police raided the house in 1925. 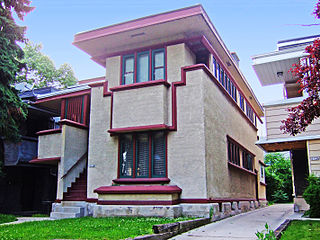 The American System-Built Homes were modest houses designed by architect Frank Lloyd Wright. They were developed between 1912 and 1916 to fulfill his interest in affordable housing. Wright was devoted to the idea of providing beautiful yet affordable homes to the public. His firm produced over 960 drawings for the project, the largest number of drawings for any project in the Wright archives. The designs were standardized, and customers could choose from seven models. Because of this standardization, the lumber could be precut at the factory, thereby cutting down on both waste and the amount of skilled labor needed for construction. The buildings are often termed prefabricated homes, but they were not, since no parts of the homes were constructed off-site. The lumber was cut at the factory, packaged along with all other components, and delivered to the work site for construction. Some are located in a federal historic district in Milwaukee, Wisconsin, and others have been designated Chicago Landmarks in Chicago, Illinois.

Jarvis Hunt was a Chicago architect who designed a wide array of buildings, including train stations, suburban estates, industrial buildings, clubhouses and other structures.

The Union Passenger Station in Tacoma, Washington, United States, opened in 1911. It was listed on the National Register of Historic Places in 1974. It currently serves as a courthouse of the United States District Court for the Western District of Washington. The distinctive architecture, dominated by a copper dome, is a landmark for the area.

Frost & Granger was an architectural partnership from 1898 to 1910 of brothers-in-law Charles Sumner Frost (1856–1931) and Alfred Hoyt Granger (1867–1939). Frost and Granger were known for their designs of train stations and terminals, including the now-demolished Chicago and North Western Terminal, in Chicago. The firm designed several residences in Hyde Park, Illinois, and many other buildings. Several of their buildings are listed on the U.S. National Register of Historic Places.

Madison station is a former railroad station in Madison, Wisconsin. The station served passenger and freight trains of the Chicago and North Western Railway (C&NW). Passenger service ended in 1965 and the passenger station and freight depot was bought by Madison Gas and Electric (MGE) and has been renovated to serve as offices. The station and freight depot are listed as contributing properties on the National Register of Historic Places East Wilson Street Historic District. The Chicago, Milwaukee, St. Paul and Pacific Railroad had tracks paralleling the C&NW and also had a nearby passenger station.