Fourteen of the sites are among historic sites along the route of French general Rochambeau's army in 1781 and 1782.

The following are approximate tallies of current listings by county. These counts are based on entries in the National Register Information Database as of April 24, 2008 [2] and new weekly listings posted since then on the National Register of Historic Places web site. [3] There are frequent additions to the listings and occasional delistings and the counts here are approximate and not official. New entries are added to the official Register on a weekly basis. [4] Also, the counts in this table exclude boundary increase and decrease listings which modify the area covered by an existing property or district and which carry a separate National Register reference number. The numbers of NRHP listings in each county are documented by tables in each of the individual county list-articles.

Wikimedia Commons has media related to National Register of Historic Places in Connecticut .

Farmington may refer to: 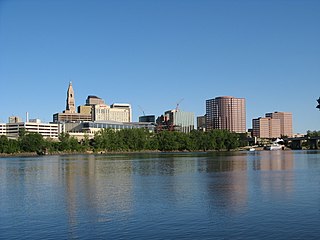 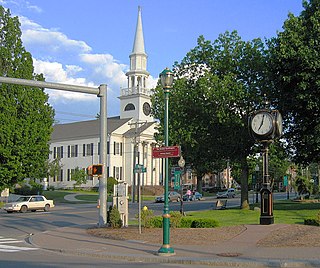 Southington is a town in Hartford County, Connecticut, United States. As of the 2020 United States Census, it had a population of 43,501. Southington contains the villages of Marion, Milldale, and Plantsville. 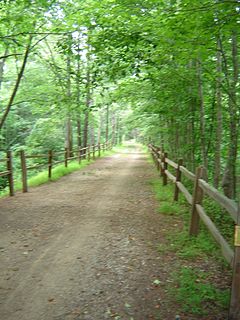 The East Coast Greenway is a 3,000-mile (4,800 km) pedestrian and bicycle route between Maine and Florida along the East Coast of the United States. In 2020, the Greenway received over 50 million visits. 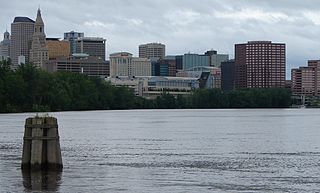 Greater Hartford is a region located in the U.S. state of Connecticut, centered on the state's capital of Hartford. It represents the only combined statistical area in Connecticut defined by a city within the state, being bordered by the Greater Boston region to the northeast and New York metropolitan area to the south and west. Sitting at the southern end of the Metacomet Ridge, its geology is characterized by land of a level grade along the shores of Connecticut River Valley, with loamy, finer-grained soil than other regions in the state. Greater Hartford, had a total population of 1,213,531 at the 2020 United States census. 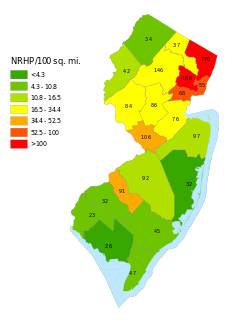 Hubbard Park, located in the Hanging Hills of Connecticut, is a wooded, mountainous park located just outside the city center of Meriden, Connecticut. It comprises approximately 1,800 acres (7.3 km2) of carefully kept woodlands, streams, dramatic cliff faces, flower gardens, and the James Barry bandshell and picnic spots, as well as its showpiece, Mirror Lake. The park is listed on the National Register of Historic Places.

This is a list of the National Register of Historic Places designations in Hartford County, Connecticut.

The Farmington Canal, also known as the New Haven and Northampton Canal, was a major private canal built in the early 19th century to provide water transportation from New Haven into the interior of Connecticut, Massachusetts and beyond. Its Massachusetts segment was known as the Hampshire and Hampden Canal. With the advent of railroads, it was quickly converted to a railroad in the mid-19th century and in recent years has been converted to a multi-use trail after being abandoned for years. 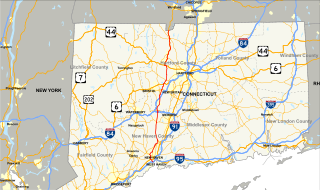 Connecticut Route 10 is a state highway that runs between New Haven and the state line near Granby. It continues north of the state line as Massachusetts Route 10, which in turn continues directly to New Hampshire Route 10.

The New Haven and Northampton Railroad was a railroad originally built alongside a canal between 1847 and 1850 in Connecticut. Leased by the New York and New Haven Railroad from 1849 to 1869, the railroad expanded northwards to Massachusetts and its second namesake city in 1859. Upon the end of the lease in 1869, the company expanded further into Massachusetts, reaching as far north as Shelburne and Turners Falls. 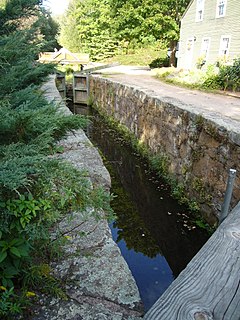 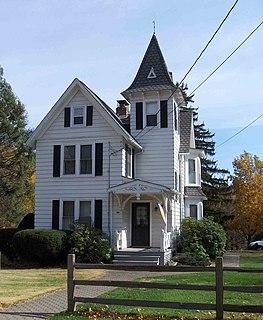 Marion is a neighborhood in the town of Southington in Hartford County, Connecticut, United States. It is generally the area in the vicinity of the intersection of Route 322 and Marion Avenue just north of the Cheshire town line.

The Tunxis Trail is a 79-mile (127 km) Blue-Blazed hiking trail "system" that traverses the western ridge of the central Connecticut Valley. The mainline trail is not completely contiguous, notably there are two gaps of several miles.

This is a list of the National Register of Historic Places listings in Southington, Connecticut.

Farmington Canal State Park Trail is a Connecticut state park forming a portion of the Farmington Canal Heritage Trail in the towns of Cheshire and Hamden. The developed section of the trail within state park boundaries runs over 17.0 miles (27.4 km) from Lazy Lane in Southington to Todd Street in Hamden and includes the historic Farmington Canal's restored Lock 12, located south of Brooksvale Road in Cheshire. The paved, multiple-use trail is used for hiking, biking, jogging, in-line skating and cross-country skiing.