The complete list of the 40 architectural style codes in the National Register Information System—NRIS follows: [1]

Federal architecture was the classicizing architecture style built in the newly founded United States between c. 1780 and 1830. Examples include: the Old Town Hall in Massachusetts, and Plumb House in Virginia.

Greek Revival architecture is a Neoclassical movement of the late 18th and early 19th centuries in Europe. It emerged in the U.S. following the War of 1812 and while a revolutionary war in Greece attracted America's interest. Greek Revival architecture was popularized by Minard Lafever's pattern books: The Young Builders' General Instructor in 1829, the Modern Builders' Guide in 1833, The Beauties of Modern Architecture in 1835, and The Architectural Instructor in 1850.

Many plantation houses in the Southern United States were built in Greek Revival variations, including Millford Plantation, Melrose, Gaineswood, and Annandale Plantation

Examples of the American revival of classical Palladian architecture include: The Rotunda by Thomas Jefferson at the University of Virginia, and the Hammond-Harwood House in Annapolis, Maryland.

For examples, see Category: Victorian architecture in the United States.

Late Victorian architecture is widely distributed on the register's listings, for many building types in every state. The Carpenter Gothic style was popular for Late Victorian wooden churches.

The Queen Anne style was popular in later American Victorian architecture, after the earlier Italianate style, and is frequent on NRHP residential listings. The Shingle Style is an American variation of Queen Anne.

For examples, see Category: Revival architecture in the United States.

A grouping of historicist architecture Revival styles, with the title Late 19th and 20th Century Revivals, has been applied by the NRHP for many listings. There are numerous listed buildings designed in an amalgam of several to many revival styles that defy a singular or simpler classification title.

Mission/Spanish Revival is an amalgam of two distinct styles popular in different but adjacent eras: the primarily late-19th-century Mission Revival Style architecture and early-20th-century (and later) Spanish Colonial Revival architecture. The combined term, or the individual terms, are often used in the style classifications of NRHP listed buildings. [1]

Examples include the Institute of American Indian Arts, La Fonda on the Plaza, and the Mabel Dodge Luhan House in New Mexico, and the Painted Desert Inn in Arizona.

Examples in California include Grauman's Chinese Theatre and Egyptian Theatre in Hollywood, the Citadel Outlets in Commerce near Los Angeles, and the Rosicrucian Egyptian Museum in San Jose.

The Mayan Revival architecture style frequently blends Maya architectural and artistic motifs with those of other Mesoamerican cultures, particularly of Aztec architecture.

Examples include: the Mayan Theater in Downtown Los Angeles; the Hollyhock House by Frank Lloyd Wright in East Hollywood; and the Aztec Hotel on historic U.S. Route 66 in Southern California.

"Postmedieval English" architecture is a style term used for a number of NRHP listings, including William Ward Jr. House in Middlefield, Connecticut.

"Late 19th and Early 20th Century American Movements" are revival styles and other American architectural movements, that originated during increasing development in the United States during the Second Industrial Revolution of the late 19th century, and continuing development and urbanization during the early 20th century before World War I.

'American Movements' is a broader design and art movement phrase used in the visual arts of the United States. It refers to U.S. centric art and design movements that originated during any century of the country's history.

Bungalow/Craftsman is a term commonly appearing in NRHP listings, which reflects American Craftsman and Bungalow styles.

American Craftsman is often a term used for the Arts and Crafts movement works and philosophy expressed in the United States. It can include domestic architecture, interior design, landscape design, applied arts, decorative arts, and the fine arts. Many Craftsman and other style influenced California bungalow houses were popular and built nationwide into the 1930s.

Very large and well detailed custom residences are described as ultimate bungalows, such as the works by Greene and Greene in California. Examples include: the Gamble House in Pasadena, and the Thorsen House in Berkeley. Smaller American Craftsman homes include: Batchelder House and Holmes-Shannon House. Bungalow examples include the Birthplace of Richard Nixon and the Lanterman House. Bungalow courts include: Palmetto Court and Gartz Court.

There are hundreds of National Register-listed buildings of the Early Commercial architecture type. [1]

The style may be a subtype/predecessor of the full Chicago School style architecture. [ citation needed ]

American Craftsman is an American domestic architectural style, inspired by the Arts and Crafts movement, which included interior design, landscape design, applied arts, and decorative arts, beginning in the last years of the 19th century. Its immediate ancestors in American architecture are the Shingle style, which began the move away from Victorian ornamentation toward simpler forms; and the Prairie style of Frank Lloyd Wright. The name "Craftsman" was appropriated from furniture-maker Gustav Stickley, whose magazine The Craftsman was first published in 1901. The architectural style was most widely used in small-to-medium-sized Southern California single-family homes from about 1905, so that the smaller-scale Craftsman style became known alternatively as "California bungalow". The style remained popular into the 1930s, and has continued with revival and restoration projects through present times.

Maple Ridge is a historic district in Tulsa, Oklahoma. It is bounded by the Inner Dispersal Loop on the north, Hazel Boulevard on the south, Peoria Avenue on the east and the Midland Valley Railroad right of way on the west. The northern portion of the district, between 15th Street and 21st Street, has been zoned with Historic Preservation Overlay Zoning by the City of Tulsa and is called North Maple Ridge.

Yorktown is a historic district in Tulsa, Oklahoma. It is bordered by 16th and 17th Streets on the north, 20th Street on the south, Lewis Avenue on the east, and Victor/Wheeling Avenues on the west.

The Simsbury Center Historic District is a 75-acre (30 ha) historic district located in the town center area of Simsbury, Connecticut. It encompasses seven blocks of Hopmeadow Street, as well as the cluster of commercial, civic, and residential buildings along Railroad, Station, and Wilcox Streets, and Phelps Lane. Although its oldest element is the cemetery, most of its buildings were built in the late 19th and early 20th century. It was listed on the National Register of Historic Places in 1996.

The Tariffville Historic District is a 93 acres (38 ha) historic district in the town of Simsbury, Connecticut. It was listed on the National Register of Historic Places in 1993. It is part of the Tariffville section of Simsbury. The district includes 165 contributing buildings and two contributing sites. It also includes 26 non-contributing buildings and 4 non-contributing sites. There are several houses in the district of Gothic Revival style, probably following designs from pattern books of architect Andrew Jackson Downing. The Trinity Episcopal Church is the only building in the district designed by an architect of national standing, namely Henry C. Dudley. Many of the homes in the area were built by the Tariff Manufacturing Company, which opened a carpet mill along the Farmington River, and needed housing for workers. 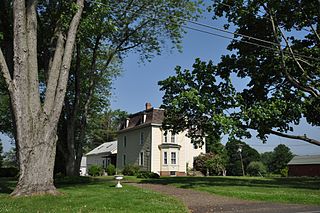 The Bradstreet Historic District encompasses the rural 19th-century village of Bradstreet in Hatfield, Massachusetts. It is centered at the junction of Depot Road and Main Street, and includes properties lining those two streets and Old Farm Road. Most of the buildings in the area date to the second half of the 19th century, featuring architectural styles typical of the period, including Queen Anne, Second Empire, Italianate, and Colonial Revival. The village grew on land that was originally granted to colonial governor Simon Bradstreet and divided in 1682, and has remained largely agricultural since then. The district was listed on the National Register of Historic Places in 1997.

Wakefield Park Historic District is a residential historic district encompassing a portion of a late-19th/early-20th century planned development in western Wakefield, Massachusetts. The district encompasses sixteen properties on 8 acres (3.2 ha) of land out of the approximately 100 acres (40 ha) that comprised the original development. Most of the properties in the district are on Park Avenue, with a few located on immediately adjacent streets.

MidTown is an area of six square miles in Columbus, Georgia. Within its boundaries are diverse residential neighborhoods and historic districts, eleven public schools, numerous parks and public greenspaces, the Columbus Museum, the Columbus Public Library, the Muscogee County Public Education Center, the Columbus Aquatic Center, commercial office and retail districts, and the international headquarters for Aflac. MidTown is home to over 22,000 residents living in 8500 households and is six miles (10 km) north of Fort Benning on I-185.

The Canton Corner Historic District is a historic district encompassing the historic town center of Canton, Massachusetts. Centered on the junction of Pleasant and Washington Streets, it includes more than 25 properties and 170 acres (69 ha), whose architectural history spans 250 years of occupation and include the town's major civic buildings. The district was added to the National Register of Historic Places on September 9, 2009.

The Cork Hill District is a nationally recognized historic district located in Davenport, Iowa, United States. It was listed on the National Register of Historic Places in 1984. The historic district covers 18.7-acre (7.6 ha) and stretches from the campus of Palmer College of Chiropractic on the west to the Sacred Heart Cathedral Complex on the east. It is the western half of a neighborhood of the same name. When listed, the district included 12 contributing buildings. It includes Greek Revival, Italianate, and Victorian architecture. The district was covered in a 1982 study of Davenport Multiple Resource Area and/or its 1983 follow-on.

The Canton Center Historic District encompasses the historic rural town center of Canton, Connecticut. Extending mainly along Connecticut Route 179, near the geographic town center, is a well-preserved example of a rural agricultural center in Connecticut, a role served until about 1920. The district includes many examples of Late Victorian and Greek Revival architecture. It was listed on the National Register of Historic Places in 1997. 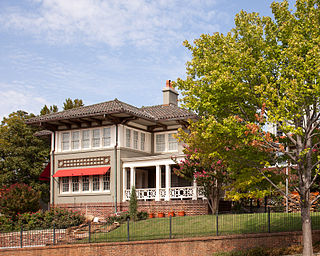 The Buena Vista Park Historic District in Tulsa, Oklahoma is a 5-acre (2.0 ha) historic district that was listed on the U.S. National Register of Historic Places (NRHP) in 2007. Its 24 contributing buildings include Late 19th and 20th Century Revivals and Late 19th and Early 20th Century American Movements architecture, specifically Colonial Revival architecture, Prairie School, and Bungalow/Craftsman architecture. The period of significance is 1913-1933.

The Whitlock Avenue Historic District in Marietta, Georgia, is an 82-acre (33 ha) historic district that was listed on the National Register of Historic Places in 1989. The listing included 101 contributing buildings.

The Green Street Historic District is a historic district in Marion, Alabama. It is centered on West Green Street and includes examples of American Craftsman, Greek Revival, and Federal style architecture. It contains 33 structures, dating from the mid-1830s to the present, with 24 of them listed as contributing buildings. It was added to the National Register of Historic Places on May 30, 1979.

Mordecai Place Historic District is a historic neighborhood and national historic district located at Raleigh, North Carolina. The district encompasses 182 contributing buildings and 1 contributing object in the most architecturally varied of Raleigh's early-20th century suburbs for the white middle-class. Mordecai Place was listed on the National Register of Historic Places in February 1998, with a boundary increase in 2000.

The Elm Street Historic District encompasses a colonial-era roadway layout and a cross-section of historical residential architecture styles in Rocky Hill, Connecticut. Elm Street between Silas Deane Highway and Grimes Road is an old colonial road, laid out in the late 17th century, and has retained an unusually wide right-of-way, typical for the period but rarely preserved. The houses lining it date from 1769 to the 1930s. The district was listed on the National Register of Historic Places in 1998. 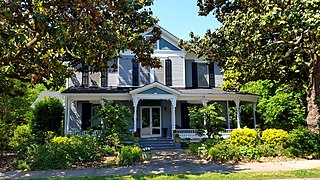 The Benson Street-Forest Avenue Residential Historic District is a historic district in Hartwell, Georgia which was listed on the National Register of Historic Places in 1986. 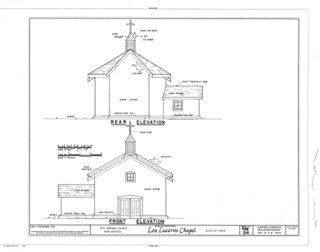 Los Luceros Hacienda, in Rio Arriba County, New Mexico near Los Luceros, New Mexico, is a historic site which was listed on the National Register of Historic Places in 1983. The hacienda property adjoins, or is close to, the Rio Grande. It is on a private road about .25 miles (0.40 km) off County Route 41