Dearborn Station (also referred to as Polk Street Station) was in the late 1800s one of six intercity train stations serving downtown Chicago, Illinois. Built in 1885, it is located at Dearborn and Polk Streets, adjacent to Printers Row. The station was owned by the Chicago & Western Indiana Railroad, which itself was owned by the companies operating over its line. The station is now a shopping mall housing office, retail and entertainment space.

The Romanesque Revival structure, designed by Cyrus L. W. Eidlitz, opened May 8, 1885 at a cost of $400 to $500 thousand (equivalent to $11.4 to $14.2 million in 2020). [3] The three-story building's exterior walls and twelve-story clock tower were composed of pink granite and red pressed brick topped by a number of steeply-pitched roofs. Modifications to the structure following a fire in 1922 included eliminating the original pitched roof profile. Behind the head house were the train platforms, shielded by a large train shed. [4] Inside the station were ticket counters, waiting rooms, and Fred Harvey Company restaurants. [5] [3]

Amtrak (the National Railroad Passenger Corporation) chose to consolidate its Chicago operations at the Union Station. The final intercity passenger train to depart Dearborn Station was the Grand Trunk Western Railroad's International Limited , which departed on April 30, 1971. The arrival of the Atchison, Topeka & Santa Fe Railway's San Francisco Chief and Grand Canyon from California on May 2 brought intercity operations at Dearborn to a close. The Norfolk & Western Railway's Orland Park commuter service, the Orland Park Cannonball , continued to use a platform at Dearborn until 1976. [4]

By 1976, Dearborn Station's train shed was demolished and tracks were removed; the head house building was retained. The train station stood abandoned into the mid-1980s when it was converted to retail and office space. [3] The former rail yards were converted for use as Dearborn Park.

As of 1920 the Dearborn Station served as a terminal for 25 railway lines, serving 17,000 passengers daily on 122 trains. [3] Some of the railroad that served the station include the following, with some of the more well-known name trains listed:

The following commuter rail services also operated from the station:

In blues musician Henry Thomas' 1927 song "Railroadin' Some", the "Polk Street Depot" is the next to last stop on a journey that begins in Fort Worth, Texas, and ends in Chicago.

Dearborn Station is mentioned multiple times in the 1974 "Adam's Ribs" episode of M*A*S*H , in which Hawkeye Pierce craves the barbecued ribs from a fictional restaurant adjacent to the station, but can't recall the name. He calls the station master from South Korea to get the restaurant's name and phone number. He incorrectly calls it the "Dearborn Street Station".

"Dearborn Station" is a song by the rock band Fortune that was released in 1985. [9] 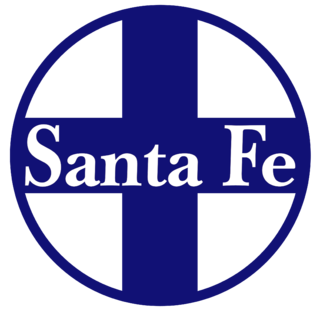 The Atchison, Topeka and Santa Fe Railway, often referred to as the Santa Fe or AT&SF, was one of the larger railroads in the United States, named after the cities and towns of Atchison, Topeka, and Santa Fe. Chartered in February 1859, the railroad reached the Kansas–Colorado border in 1873 and Pueblo, Colorado, in 1876. To create a demand for its services, the railroad set up real estate offices and sold farmland from the land grants that it was awarded by Congress. Despite the namesake, its mainline did not directly serve Santa Fe, due to the mountainous terrain, the metropolitan city of Albuquerque instead served New Mexico and the Santa Fe area.

Chicago Union Station is an intercity and commuter rail terminal located in the West Loop Gate neighborhood of Chicago, Illinois. The station is Amtrak's flagship station in the Midwest. While serving long-distance passenger trains, it is also the downtown terminus for six Metra commuter lines. The station is just west of the Chicago River between West Adams Street and West Jackson Boulevard, adjacent to the Chicago Loop. Including approach and storage tracks, it covers about nine and a half city blocks. 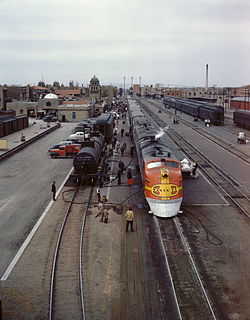 The Super Chief was one of the named passenger trains and the flagship of the Atchison, Topeka and Santa Fe Railway. It claimed to be "The Train of the Stars" because of the various celebrities it carried between Chicago, Illinois, and Los Angeles, California.

The Fred Harvey Company was the owner of the Harvey House chain of restaurants, hotels, and other hospitality industry businesses alongside railroads in the western United States. It was founded in 1876 by Fred Harvey to cater to the growing number of train passengers. When Harvey died in 1901, his family inherited 45 restaurants and 20 dining cars in 12 states. By 1968, when it was sold to Amfac, Inc., the Fred Harvey Company was the sixth largest food retailer in the United States. It left behind a lasting legacy of good food, dedication to customers, decent treatment of employees, and preservation of local traditions.

The Southwest Service (SWS) is a Metra commuter rail line, running southwest from Union Station in downtown Chicago, Illinois, to Manhattan, Illinois. Metra does not refer to its lines by color, but the timetable accents for the SouthWest Service line are "Banner Blue," for the Wabash Railroad's Banner Blue passenger train. The trackage is owned by Metra north of a junction with the Belt Railway of Chicago at Loomis Boulevard, and is leased from Norfolk Southern Railway south of the junction.

Central Station was an intercity passenger terminal in downtown Chicago, Illinois, at the southern end of Grant Park near Roosevelt Road and Michigan Avenue. Owned by the Illinois Central Railroad, it also served other companies via trackage rights. It opened in 1893, replacing Great Central Station, and closed in 1972 when Amtrak rerouted services to Union Station. The station building was demolished in 1974. It is now the site of a redevelopment called Central Station, Chicago.

LaSalle Street Station is a commuter rail terminal at 414 South LaSalle Street in downtown Chicago. It was a major intercity rail terminal for the New York Central Railroad until 1968, and for the Chicago, Rock Island and Pacific Railroad until 1978, but now serves only Metra's Rock Island District. The present structure became the fifth station on the site when its predecessor was demolished in 1981 and replaced by the new station and the One Financial Place tower for the Chicago Stock Exchange. The Chicago Board of Trade Building, Willis Tower and Harold Washington Library are nearby.

The Chicago and Eastern Illinois Railroad was a Class I railroad that linked Chicago to southern Illinois, St. Louis, and Evansville IN. Founded in 1877, it grew aggressively and stayed relatively strong throughout the Great Depression and two World Wars before finally being purchased by the Missouri Pacific Railroad and the Louisville and Nashville Railroad (L&N). Missouri Pacific merged with the C&EI corporate entity in 1976, and was later acquired itself by the Union Pacific Railroad.

The Chicago and Western Indiana Railroad was the owner of Dearborn Station in Chicago and the trackage leading to it. It was owned equally by five of the railroads using it to reach the terminal, and kept those companies from needing their own lines into the city. With the closure of Dearborn Station in 1971 and the Calumet steel mills in 1985, the railroad was gradually downgraded until 1994 when it became a subsidiary of the Union Pacific Corporation.

The International was a named passenger train operated between Chicago and Toronto. It was originally an overnight train operated by the Grand Trunk Railway of Canada and its successors the Canadian National Railway and Grand Trunk Western Railroad, running as far as Montreal. The train was cut back to Port Huron, Michigan, in 1970 and discontinued in 1971.

The Chicago and Southern Railroad built a rail line in northeastern Illinois, extending south from Chicago to Thornton. It now mainly forms part of the Grand Trunk Western Railroad, while the north end has been operated by the Atchison, Topeka and Santa Fe Railway, the Illinois Northern Railway, and most recently the Central Illinois Railroad.