The Collegium Musicum was one of several types of musical societies that arose in German and German-Swiss cities and towns during the Reformation and thrived into the mid-18th century.

Generally, while societies such as the Kantorei  [ de ] (chorale) cultivated vocal music for church performance and the convivium musicum discussed musical philosophy over a banquet, the collegia musica performed both vocal and instrumental music for pleasure; they focused on instrumental music as it rose in stature during the Baroque era. Though closed amateur societies in concept, collegia frequently included professionals to fill out the music and admitted non-members to performances. Moreover, they often provided music for church, state, and academic occasions and gained the patronage of leading citizens. From the 1660s, their functions largely constituted the beginnings of public concert life in Germany.

Leipzig collegia musica, consisting mostly of university students, enjoyed a succession of particularly illustrious directors, including Johann Kuhnau (1688), refounded by Telemann (1702), [1] and Bach (1729–1737), who composed several concertos and dramme per musica for weekly performances at Café Zimmermann, Gottfried Zimmerman's coffeehouse, and for "extraordinary" concerts. Telemann went on to promote professional concerts by Frankfurt and Hamburg collegia in the late 1720s, thus fostering the emergence of public subscription concerts in Germany. With the Moravian emigration, American collegia sprang up beginning in 1744 in Pennsylvania, Maryland, Ohio, and the Carolinas.

In 1909, Hugo Riemann refounded the Leipzig collegium within the University, initiating a widespread modern trend in German and American universities to foster the performance of early music on original instruments or replicas. The term collegium musicum has thus come to be associated in large measure with university ensembles that perform early music, though from a historical perspective, the term need not imply any restriction in repertory.

Although the Collegium Musicum (Leipzig)  [ de ] became the most famous, due to its association with Bach, other cities had similar institutions. The Collegium Musicum (Hamburg) was an amateur musical ensemble founded in Hamburg in the 17th century by Matthias Weckmann, as a complement to the professional Hamburger Ratsmusik.

Various modern ensembles have taken the name, including:

The year 1702 in music involved some significant events.

The Harvard–Radcliffe Collegium Musicum is a mixed chorus at Harvard University, composed of roughly 50 voices from undergraduate and graduate student populations. Founded in 1971 to coincide with the coeducational merger of Harvard and Radcliffe College, Collegium drew from members of the Harvard Glee Club and the Radcliffe Choral Society to form a smaller mixed group that could represent Harvard on tours. Although Collegium used to perform primarily early Renaissance music, its repertoire now draws from centuries of a cappella and orchestral selections. Together with the (tenor-bass) Harvard Glee Club and the (soprano-alto) Radcliffe Choral Society, it is a member of the Harvard Choruses.

Schweigt stille, plaudert nicht, BWV 211, also known as the Coffee Cantata, is a secular cantata by Johann Sebastian Bach. He composed it probably between 1732 and 1735. Although classified as a cantata, it is essentially a miniature comic opera. In a satirical commentary, the cantata amusingly tells of an addiction to coffee.

The Radcliffe Choral Society(RCS) is a 60-voice treble choral ensemble at Harvard University. Founded in 1899, it is one of the country's oldest soprano-alto choruses and one of its most prominent collegiate choirs. With the tenor-bass Harvard Glee Club and the mixed-voice Harvard-Radcliffe Collegium Musicum, it is one of the Harvard Choruses. All three groups are led by Harvard Director of Choral Activities Andrew Clark. The RCS Resident Conductor is Meg Weckworth. RCS tours domestically every year and travels internationally every four years. 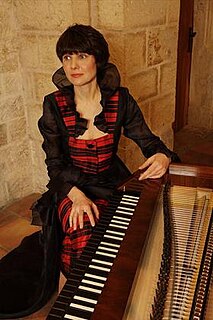 Viviana Sofronitsky is a Russian-Canadian classical pianist. Born in Moscow, her father was the noted Soviet-Russian pianist Vladimir Sofronitsky.

The Café Zimmermann, or Zimmermannsches Kaffeehaus was the coffeehouse of Gottfried Zimmermann in Leipzig which formed the backdrop to the first performances of many of Bach's secular cantatas, e.g. the Coffee Cantata, and instrumental works.

Helmut Winschermann was a German classical oboist, conductor and academic teacher. He founded the Deutsche Bachsolisten ensemble for historically informed performances, and was their conductor from 1960 until his death. They made many recordings and toured internationally, especially to Japan.

Collegium Musicum was one of several types of musical societies in German and German-Swiss cities and towns.

Pieter-Jan Belder is a Dutch instrumentalist in historically informed performance, playing recorder, harpsichord and fortepiano. He founded the ensemble Musica Amphion for recordings and performances.

Neues Bachisches Collegium Musicum is a chamber orchestra, founded in Leipzig, Saxony, Germany. It follows the tradition of collegia musica, developed by Johann Sebastian Bach, also in Leipzig. The orchestra is dedicated to historically informed performances, based on the latest research. 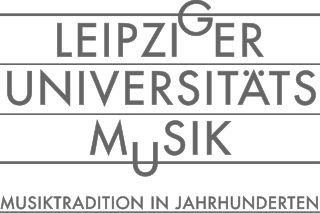 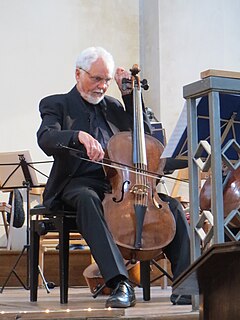 Siegfried Pank is a German cellist and viol player. He was a member of the Gewandhausorchester in Leipzig from 1962 to 1980, and toured with the Neues Bachisches Collegium Musicum. He turned to playing the viol in historically informed performance, and lectured cello and viol at the Musikhochschule Leipzig from 1984, as professor from 1988 to 2001. He was a co-founder of the International Telemann Association in 1991, serving as its president from 2012.

This is a list of recordings of Bach's Wie schön leuchtet der Morgenstern, BWV 1, a chorale cantata for the Annunciation, celebrated on 25 March. Bach composed the cantata in Leipzig in 1725, as part of his second cantata cycle.