Dalgona (달고나) or ppopgi (뽑기) is a Korean candy made with melted sugar and baking soda. [1] [2] It was a popular street snack in the 1970s and 1980s,and is still eaten as a retro food. [3] When a pinch of baking soda is mixed into melted sugar,the thermal decomposition of the baking soda releases carbon dioxide,which makes the liquidized sugar puff up,and it becomes a light and crunchy candy once cooled and hardened. [4] Typically,the creamy beige liquid is poured on a flat surface,pressed flat,and stamped with a patterned mold. Eaters try to trim their way around the outline or picture on the snack without breaking the picture. [4] If the trimming is completed successfully without breaking the candy,the consumer receives another free dalgona. [5]

Modern cafes in Korea serve novel beverages where dalgona-flavoured coffee cream is heaped on top of iced tea or coffee (see:Dalgona coffee), [6] and pastries such as scones. [7] Some cafes also used dalgona to launch desserts such as bingsu and souffle. [8] [9]

Dalgona was a significant element of the Netflix series Squid Game ,with a deadly version of the Dalgona challenge being the second game played in the series. The success of the series lead to a revival of the candy's popularity in South Korea. Sales of the candy have doubled for street vendors. [10] [11] People have also taken to social media to make their own candy at home as a challenge. [12]

Dalgona was originally a term specific for expensive candies that use glucose which did not use a mold,while ppopgi was originally candies that use sugar and thus could be easily molded into shapes such as stars and circles. Due to problems with dalgona regarding its susceptibility to mould,the word dalgona began to refer to the same food as ppopgi. [13] [14] In Gyeonggi Province,including Seoul and Incheon,it was mainly called dalgona and ppopgi,but the names vary from region to region. [15] [16]

From the 1970-80s to the early 2000s,when the popularity of ppopgi was in full swing,the media had little influence,so the names were different for each region. However,generations later,the spread of smartphones and the influence of the media have increased,and the influence of the Seoul/Gyeonggi region,which is naturally exposed to the media,has increased. Since then,these regional names have lost their power,and most middle and high school students now simply call them dalgona.

Korea's provinces have been the primary administrative division of Korea since the mid Goryeo dynasty in the early 11th century,and were preceded by provincial-level divisions dating back to Unified Silla,in the late 7th century.

Jeolla Province was one of the historical Eight Provinces of Korea during the Kingdom of Joseon in today Southwestern Korea. It consisted of the modern South Korean provinces of North Jeolla,South Jeolla and Gwangju Metropolitan City as well as the Jeju Province. The provincial capital was Jeonju,the current capital of North Jeolla. The entire inland region was called Honam,which is still commonly used today. 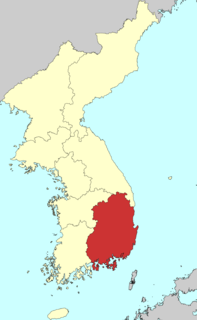 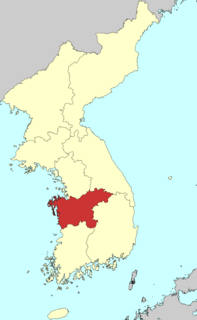 Chungcheong was one of the eight provinces of Korea during the Joseon Dynasty. Chungcheong was located in the southwest of Korea. The provincial capital was located at Gongju,which had been the capital of the kingdom of Baekje from 475 to 538.

During most of the Joseon Dynasty,Korea was divided into eight provinces. The eight provinces' boundaries remained unchanged for about 480 years from 1413 to 1895,and formed a geographic paradigm that is still reflected today in the Korean Peninsula's administrative divisions,dialects,and regional distinctions. The names of all eight provinces are still preserved today,in one form or another. These eight historical provinces form both North and South Korea,and are not to be confused with the provinces that make up South Korea.

A number of Korean dialects are spoken on the Korean Peninsula. The peninsula is extremely mountainous and each dialect's "territory" corresponds closely to the natural boundaries between different geographical regions of Korea. Most of the dialects are named for one of the traditional Eight Provinces of Korea. One is sufficiently distinct from the others to be considered a separate language,the Jeju language. 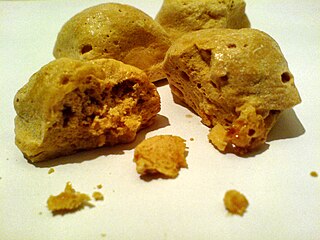 Honeycomb toffee,honeycomb candy,sponge toffee,cinder toffee or hokey pokey is a sugary toffee with a light,rigid,sponge-like texture. Its main ingredients are typically brown sugar and baking soda,sometimes with an acid such as vinegar. The baking soda and acid react to form carbon dioxide which is trapped in the highly viscous mixture. When acid is not used,thermal decomposition of the baking soda releases carbon dioxide. The sponge-like structure is formed while the sugar is liquid,then the toffee sets hard. The candy goes by a variety of names and regional variants.

The Jogye Order,officially the Jogye Order of Korean Buddhism,is the representative order of traditional Korean Buddhism with roots that date back 1200 years to the Later Silla National Master Doui,who brought Seon and the practice taught by the Sixth Patriarch,Huineng,from China around 820 CE. The name of the Order,Jogye,was adopted from the name of the village where Patriarch Huineng's home temple,Nanhua Temple,is located,.

Righteous armies,sometimes called irregular armies or militias,are informal civilian militias that have appeared several times in Korean history,when the national armies were in need of assistance. 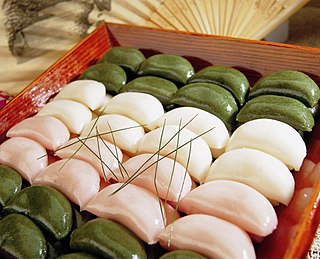 Songpyeon is a traditional Korean food made of rice powder. It is a type of tteok,small rice cakes,traditionally eaten during the Korean autumn harvest festival,Chuseok. It is a popular symbol of traditional Korean culture. The earliest records of songpyeon date from the Goryeo period.

Korean Flagship National Universities had been created by the South Korean government to lead the development of South Korea into a developed country through providing the highest educational institutions nationwide. The Korean government created one flagship national university for each province between 1946 and 1968 when South Korea consisted of eight provinces and two independent cities. Ten Korean Flagship National Universities have been taking roles as the leading national institutes of higher education in South Korea.

The Chungcheong dialects of the Korean language are spoken in the Chungcheong (Hoseo) region of South Korea,including the metropolitan city of Daejeon. It may also include several areas in Gyeonggi Province,most notably Pyeongtaek,that are adjacent to Chungcheong Province. Chungcheong dialect can be divided into two categories:the Northern Chungcheong dialect,notable for its similarity capital Gyeonggi region speech,and the Southern dialect,which is similar to the Jeolla dialect. This dialect is notable for its slow enunciations,vowel changes,and unique jargon. However,as Seoul expands and standard language supremacy spreads,young people in Chungcheong Province,including Daejeon and Sejong,do not use original dialect,or use very little of it. Most young people use standard language and dialect alternately,and in cities located just below the Seoul metropolitan area (Sudogwon),like Cheonan,dialect is on the verge of extinction.

In South Korea,highways that are managed by the provincial governments are called Local highways. Usually route numbers have 2~4 digits;the first digit stands for the main province of its manager.

National Route 77 is a national highway in South Korea connects Jung District,Busan to Paju. It was established on 25 August 2001.

Dalgona coffee is a beverage made by whipping equal parts instant coffee powder,sugar,and hot water until it becomes creamy and then adding it to cold or hot milk. Occasionally,it is topped with coffee powder,cocoa,crumbled biscuits,or honey. It was popularized on social media during the COVID-19 pandemic,when people refraining from going out started making videos of whipping the coffee at home,by hand without using electrical mixers. The name is derived from dalgona,a Korean sugar sweet,due to the resemblance in taste and appearance,though most dalgona coffee doesn't actually contain dalgona.