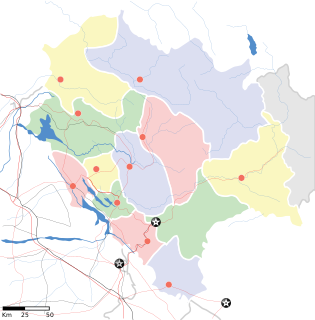 Dalhousie is a hill station in Chamba district, in the northern Indian state of Himachal Pradesh. It is situated on 5 hills and has an elevation of 1,970 metres above sea level. 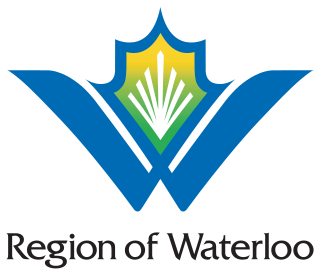 The Regional Municipality of Waterloo is a regional municipality located in Southern Ontario, Canada. It consists of the cities of Kitchener, Waterloo and Cambridge,, and the townships of Wellesley, Woolwich, Wilmot, and North Dumfries. It is often referred to as the Region of Waterloo or Waterloo Region. The region is 1,369 square kilometres in size and its regional seat of government is in Kitchener. 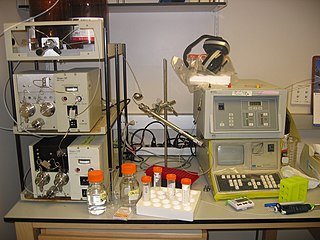 High-performance liquid chromatography is a technique in analytical chemistry used to separate, identify, and quantify each component in a mixture. It relies on pumps to pass a pressurized liquid solvent containing the sample mixture through a column filled with a solid adsorbent material. Each component in the sample interacts slightly differently with the adsorbent material, causing different flow rates for the different components and leading to the separation of the components as they flow out of the column.

Autism spectrum, also known as autism spectrum disorder (ASD) or autism spectrum condition (ASC), is a range of neurodevelopmental disorders that includes autism, Asperger syndrome and other related conditions. Individuals on the spectrum are often hyper sensitive to sensory stimuli, and present with two types of symptoms: problems in social communication and social interaction; and restricted, repetitive patterns of behavior, interests or activities. Long term issues may include difficulties in performing daily tasks, creating and keeping relationships, and maintaining a job.

School District 15 is a Canadian school district in New Brunswick.

Oromocto High School is a high school located in Oromocto, New Brunswick, Canada. It is the third largest school in the Anglophone West School District (ASD-W) and the source of education for about 1068 students annually. Oromocto High School is also the location for the Oromocto Education Centre. The principal is Jeff Holder, vice-principals are Darla Day, Maxine McConnell, and (acting) Peter Batt.

Caledonia Regional High School, is a Canadian secondary school in Hillsborough, New Brunswick. It is the least populated high school in all of Anglophone East School District.