Danny, the Champion of the World

Danny, the Champion of the World is a 1975 children's book by Roald Dahl. The plot centres on Danny, a young English boy with a big wagon, and his father, William, who live in a Gypsy caravan fixing cars for a living and partake in poaching pheasants. It was first published in 1975 in the United States by Alfred A. Knopf, Inc. and in the United Kingdom by Jonathan Cape.

It was adapted into a made-for-TV movie in 1989 by Thames Television which starred Jeremy Irons. It is based on Dahl's adult short story "Champion of the World" which first appeared in print in The New Yorker magazine, [1] as did some of the other short stories that would later be reprinted as Kiss Kiss (1960). Peter Serafinowicz provides the English language audiobook recording. [2] Time included the novel in its list of the 100 Best Young-Adult Books of All Time. [3]

Danny was only four months old when his mother died. At the beginning of the book, he lives with his widowed father, William, in an old caravan behind the service station and garage owned and operated by his father. At the age of nine, Danny learns that his father is an avid poacher, as was his father's father. Shortly thereafter, Danny wakes at 2:10 am to find his father hasn't returned from his latest poaching venture on the property of the local beer magnate, Mr Hazell. Danny drives to the property and finds his father in a trap, incapacitated by a broken ankle. Danny rescues his father and helps him home. While his father recovers from his injury, he and Danny realize Mr. Hazell's annual pheasant shoot is approaching - an event to which he invites wealthy, powerful and influential people. Danny and his father decide to humiliate Mr Hazell by capturing all the pheasants in the forest. To accomplish this, they place the contents of the sleeping pills prescribed to Danny's father by the village doctor, Doc Spencer, into raisins that the pheasants will eat; Danny's father calls this new method "Sleeping Beauty".

After having successfully captured 120 pheasants from Hazell's Wood, Danny and his father take a taxi (driven by a fellow poacher) to the local vicarage, where they hide the pheasants. Afterwards, they walk home. The next day, the vicar's wife (Mrs Clipstone) delivers the sleeping pheasants to Danny's father's garage in a specially built baby carriage; however, the pheasants start flying out of the baby carriage as the narcotic wears off. The birds do not travel far, as they're still sleepy. During the commotion, Mr. Hazell arrives and confronts Danny, his father and Doc Spencer. With the help of Sergeant Enoch Samways, the village policeman, Danny and his father shoo the stunned pheasants over (and in some cases inside) Mr. Hazell's Rolls Royce, damaging the car's paintwork in the process. As Mr. Hazell leaves disgraced, the pheasants wake up completely and fly away in the opposite direction from Hazell's property. The book ends when Danny is hailed as "the champion of the world" by his father, Doc Spencer and Sgt. Samways. Six pheasants died of a sleeping pill overdose, so Doc Spencer gives two each to Sgt Samways, Mrs Clipstone and Danny and his father. Danny and his father then walk into town, intending to buy a new oven to cook their pheasants. They also discuss possibly attempting to poach trout from a local stream.

Main article: Danny, the Champion of the World (film)

The book was adapted into a made-for-TV movie in 1989 by Thames Television. It was directed by Gavin Millar and starred Jeremy Irons as William and his son, Samuel, as Danny, with Robbie Coltrane as Mr. Hazell. It was released to Region 2 DVD in 2006.

Relations to other Roald Dahl books

William tells Danny a bedtime story sequence of a "Big Friendly Giant" who captures good dreams and blows them into children's bedrooms at night. Dahl would later use the same concept in the full-length novel entitled The BFG .

Danny describes being caned by his teacher, Captain Lancaster, for cheating in an exam. This is similar to an experience that Dahl recounted of his own teacher, Captain Hardcastle, in Boy: Tales of Childhood . 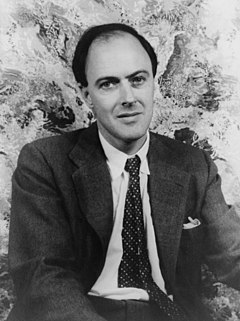 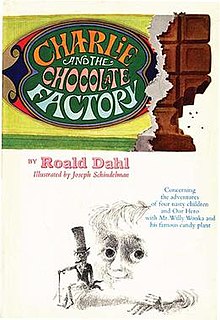 Charlie and the Chocolate Factory is a 1964 children's novel by British author Roald Dahl. The story features the adventures of young Charlie Bucket inside the chocolate factory of eccentric chocolatier Willy Wonka. 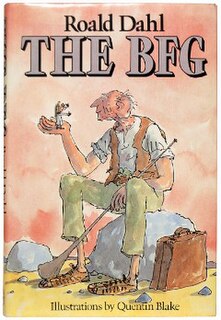 The BFG is a 1982 children's book written by British novelist Roald Dahl and illustrated by Quentin Blake. It is an expansion of a short story from Dahl's 1975 book Danny, the Champion of the World. The book is dedicated to Dahl's late daughter, Olivia, who died of measles encephalitis at the age of seven in 1962. As of 2009, the novel has sold 37 million copies in UK editions alone, with more than 1 million copies sold around the world every year.

Charlie and the Great Glass Elevator is a children's book by British author Roald Dahl. It is the sequel to Charlie and the Chocolate Factory, continuing the story of young Charlie Bucket and chocolatier Willy Wonka as they travel in the Great Glass Elevator. The book was first published in the United States by Alfred A. Knopf, Inc. in 1972, and in the United Kingdom by George Allen & Unwin in 1973.

Matilda is a book by British writer Roald Dahl. It was published in 1988 by Jonathan Cape in London, with 232 pages and illustrations by Quentin Blake. It was adapted as an audio reading by actress Kate Winslet; a 1996 feature film directed by Danny DeVito; a two-part BBC Radio 4 programme starring Lauren Mote as Matilda, Emerald O'Hanrahan as Miss Honey, Nichola McAuliffe as Miss Trunchbull and narrated by Lenny Henry; and a 2010 musical. 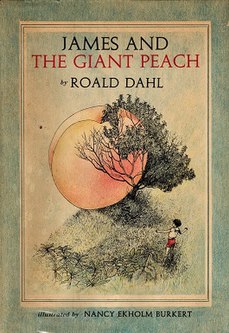 James and the Giant Peach is a popular children's novel written in 1961 by British author Roald Dahl. The original first edition published by Alfred Knopf featured illustrations by Nancy Ekholm Burkert. There have been reillustrated versions of it over the years, done by Michael Simeon for the first British edition, Emma Chichester Clark, Lane Smith and Quentin Blake. It was adapted into a film of the same name in 1996. 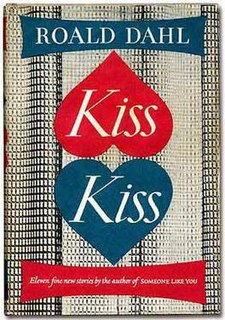 Kiss Kiss is a collection of short stories by Roald Dahl, first published in 1960 by Alfred A. Knopf. Most of the constituent stories had been previously published elsewhere.

The Twits is a humorous children's book written by Roald Dahl and illustrated by Quentin Blake. It was written in 1979, and first published in 1980. The Twits was adapted for the stage in November 2007. 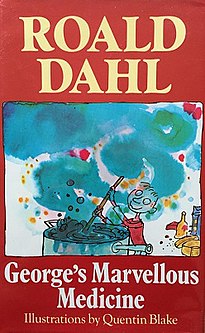 George's Marvellous Medicine is a book written by Roald Dahl and illustrated by Quentin Blake. First published in 1981, it was praised for its humour, but was also criticised for its underdeveloped plot and offbeat ending. It is one of Dahl's shorter children's books. 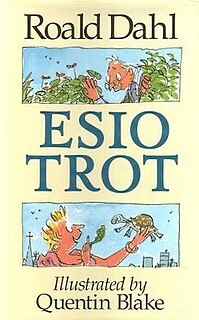 Esio Trot is a children's novel written by British author Roald Dahl and illustrated by Quentin Blake. Published in 1990, it was the last of Dahl's books to be published in his lifetime. Unlike other Dahl works, Esio Trot is the story of an old, lonely man, trying to make a connection with a person that he has loved from afar. 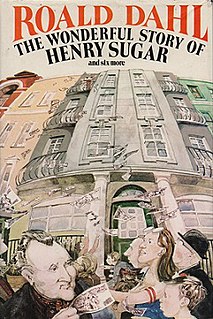 The Wonderful Story of Henry Sugar and Six More is a collection of seven short stories written by Roald Dahl. They are generally regarded as being aimed at a slightly older audience than many of his other children's books.

Switch Bitch (1974) is a book of adult short stories by British writer Roald Dahl. Four stories, originally published in Playboy between 1965 and 1974, are collected. They are linked by themes of sexual deception: in each one some large act of cunning, cruelty, or hedonism underpins the sexuality.

"The Landlady" is a short horror story by Roald Dahl. It initially appeared in The New Yorker, as did other short stories that would later be reprinted in the 1960 anthology, Kiss Kiss.

The Tragical Comedy or Comical Tragedy of Mr. Punch or simply Mr. Punch is a graphic novel written by Neil Gaiman, illustrated and designed by Dave McKean. It was published in 1994.

Trout tickling is the art of rubbing the underbelly of a trout with fingers. If done properly, the trout will go into a trance after a minute or so, and can then easily be thrown onto the nearest bit of dry land.

Danny, the Champion of the World is a 1989 film starring British Oscar-winning actor Jeremy Irons, with his son, Samuel, in the title role. It is based on the 1975 novel of the same name by Roald Dahl, and tells of a father and son who conspire to thwart a local businessman's plans to buy their land by poaching his game pheasants. It was filmed on location in Oxfordshire, mostly at Stonor Park, Henley-on-Thames. The book is written in the style of a reflective memoir by an adult Danny, who the reader might presume grew up in 1950s or 1960s rural England: however, Chapter 6 reveals that the period was in fact the 1970s, given that the "Baby Austin" car that William and Danny were repairing was more than 40 years old, having been made in 1933. The film is set in 1955.

Twenty-Nine Kisses from Roald Dahl is a 1969 short story collection for adults by Roald Dahl.

The Witches is an upcoming American fantasy comedy film directed by Robert Zemeckis, and written by Zemeckis, Guillermo Del Toro and Kenya Barris. It is based on the novel of the same name by Roald Dahl, and is the second feature length adaptation of the novel, following the 1990 film of the same name. It stars Anne Hathaway, Octavia Spencer, Stanley Tucci, Chris Rock, and Jahzir Kadeem Bruno.