Daphnandra johnsonii, also known as the Illawarra socketwood, is a rare [1] rainforest tree in the Illawarra district of eastern Australia.

It is found most often at less than 150 metres above sea level [2] on volcanic soils in sub tropical rainforest. Occasionally it is found as high as 350 metres above sea level. [3] It grows often by creeks, or dry rocky scree slopes, and in disturbed forest and rainforest margins. It is distributed from southern Berry, New South Wales to Scarborough, New South Wales in the northern Illawarra (34° S).

A member of the ancient Gondwana family Atherospermataceae, the Illawarra socketwood is endangered by extinction. Formerly considered the southernmost population of Daphnandra micrantha , the Australian socketwood. Recently it has been recognised as a separate species. The type specimen collected in the Illawarra district by L.A.S. Johnson, after whom the species was named, by Richard Schodde. The generic name Daphnandra refers to a similarity of the anthers of the bay laurel. Greek daphne refers to the bay laurel, and andros from the Greek for man. [4] The term "socketwood" is from the related species Daphnandra apatela . A feature of which is where larger branchlets meet the main trunk. This joining resembles a "ball and socket" type joint.

A small to medium-sized tree. Growing to around 20 metres tall and a stem diameter of 30 cm, with a broad and shady crown. The trunk is beige in colour, cylindrical with little buttressing. Sometimes seen with coppice leaves at the base. The bark is fairly smooth with some raised pustules of a darker colour. Branchlets are fairly thick with lenticels. Wider and flatter at the nodes. Leaf scars evident. Leaf buds with soft hairs. [4]

Leaves ovate or elliptic in shape, 6 to 12 cm long, 1.5 cm to 6 cm wide [5] with a sharply angled tip. Leaves are opposite on the stem, prominently toothed, 7 to 9 teeth on each side of the leaf. The bottom third of the leaf is without leaf serrations. The point of the leaf base to the first serration is almost a straight line. The bottom of the leaf is glossy pale green, the top side is a dull dark green.

Leaf venation is more evident under the leaf. Lateral veins not clear on the top surface. Mid rib raised both sides of the leaf. Six or seven pairs of lateral veins. Leaf stems 2 to 7 mm long, and smooth. Old leaves go pale and turn yellow on the stem.

The scent of the leaf is more faint and "soapy" on the Illawarra socketwood. Leaves of common sassafras are more aromatic, usually less coarsely toothed and the mid rib is sunken on the upper surface. [2] Common Sassafras leaves thicker and heavier to touch.

Tiny flowers appear in spring, [2] on long flower stems. Flowers white with pinkish red margins. They form on panicles or racemes, 3 to 8 cm long. The sepals and petals are around 1 to 3 mm. The fruiting capsule is woody and hairless, around 15 to 20 mm long. Opening in two sections. Mature seeds are feathery.

Healthy seeds germinate readily within a month of sowing. [4]

Plants often don't produce fertile fruit in the wild and these fruit are shorter and rounder than the viable fruit. These short fruit appear to be galled and contain no seed but contain many silky hairs or plumes that are normally attached to the seeds. Some trees contain a mixture of both short, galled fruits and long fertile fruits, most trees seem to only produce galled fruits and trees that produce only fertile fruits are rare. [4]

It also has a limited ability to colonize new areas. Its main survival strategy is the ability to sucker and coppice. [4]

Most of the 41 sites [6] are under immediate threat from clearing for agriculture, urban expansion, feral animals, weeds, inappropriate use of fire and herbicide, quarrying, and road construction. [7] Only two small populations are conserved in the reserve system. The biggest and healthiest populations are on private property. [4]

Cryptocarya obovata is a large laurel growing on basaltic and fertile alluvial soils in eastern Australian rainforests. It is found from Wyong in New South Wales to Gympie in the state of Queensland. Extinct in the Illawarra region, allegedly seen in the Illawarra in 1818 by Allan Cunningham. The species was included in the Prodromus Florae Novae Hollandiae et Insulae Van Diemen, 402 (1810)

Alyxia ruscifolia, commonly known as the chainfruit or prickly alyxia, is a shrub of high rainfall areas in eastern Australia. The natural range of distribution is from Wollongong in New South Wales to the Wet Tropics and further north to New Guinea. 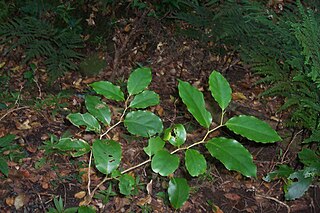 Pennantia cunninghamii, known as the brown beech, is a rainforest tree of eastern Australia. The range of natural distribution is from Clyde Mountain near Batemans Bay in southern New South Wales to Atherton in tropical Queensland. 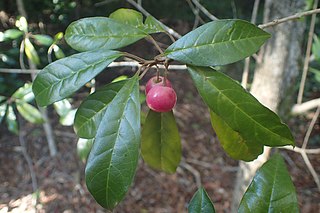 Vitex lignum-vitae, known in Australia as yellow hollywood or "lignum-vitae", is a rainforest tree of eastern Australia. The natural range of distribution is in dry, sub-tropical or tropical rainforest from the Richmond River, New South Wales to Cape York Peninsula at the northernmost tip of Australia. It also occurs in New Guinea.

Streblus brunonianus, known as the whalebone tree, is a small tree in the fig family. Commonly seen in a variety different types of rainforest, particularly by streams. 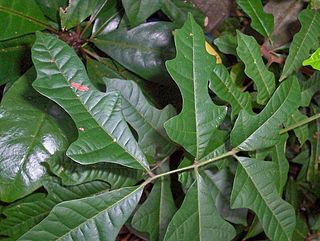 Rhodosphaera is a genus of plants in the family Anacardiaceae. The genus includes a single species, Rhodosphaera rhodanthema, which is a rainforest tree of eastern Australia. It grows in sub tropical rainforests and also in the drier form of rainforests. The natural range of distribution is from the Macleay River, New South Wales to Maryborough in south east Queensland. Common names include deep yellowwood, yellow cedar and tulip satinwood. 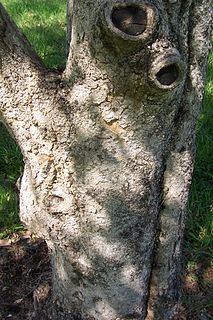 Auranticarpa rhombifolia is a rainforest tree of eastern Australia. Known as the diamond leaf pittosporum, this tree is planted in many parts of Australia as an ornamental. The white flowers and orange fruit make it a most appealing street or garden tree. Other common names include hollywood, diamond leaf laurel, white myrtle and white holly.

Macaranga tanarius is a plant found in South East Asia, Thailand, Papua New Guinea, Taiwan, and eastern Australia. It is commonly seen as a pioneer species in disturbed rainforest areas. Easily recognised for the round veiny leaves. In Australia it naturally occurs from the Richmond River, New South Wales to Cooktown in tropical Queensland.

Endiandra pubens is a rainforest tree growing in eastern Australia. The habitat is subtropical rainforest growing near streams in valleys. The range of natural distribution is from the Bellinger River, New South Wales to Bulburin National Park, south west of Gladstone, Queensland.

Backhousia subargentea is a rare Australian rainforest tree, growing near Mullumbimby in north eastern New South Wales and from Boonah to Imbil in south eastern Queensland. 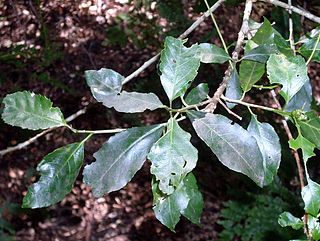 Claoxylon australe, known as brittlewood is a common rainforest shrub or understorey tree. The habitat is all types of eastern Australian rainforests. The natural range of distribution is from Eden in south eastern New South Wales to Bowen in tropical Queensland. 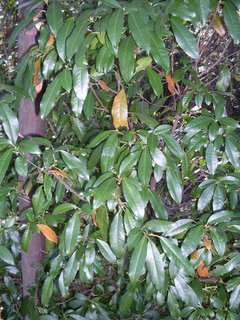 Croton verreauxii known as the green native cascarilla is a small tree or shrub growing in dry rainforest and rainforest margins in eastern Australia.

Psychotria loniceroides, known as the hairy psychotria, is a plant native to the forest areas of eastern Australia. 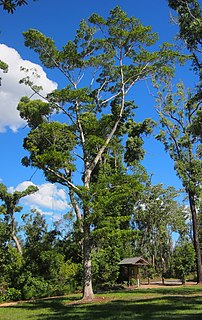 Endiandra discolor is an Australian tree, growing from near Gosford, New South Wales to Tully, Queensland in the tropics. Common names include rose walnut and domatia tree.

Sarcopetalum harveyanum, known as the pearl vine, is a common plant found mostly in coastal areas of eastern Australia. It can be found in or around rainforests, and is also seen in eucalyptus forests.

Daphnandra apatela, the socketwood, light yellowwood or canary socketwood is a common rainforest tree in eastern Australia. It grows in the more fertile alluvial soils and basaltic soils. Distributed from the Watagan Mountains in New South Wales to Miriam Vale near Gladstone in Queensland.

Daphnandra micrantha, the socketwood or Manning River socketwood is a rainforest tree in eastern Australia. It grows near streams in various types of rainforest. Restricted to the Manning River and Hastings River valleys of northern eastern New South Wales. Also seen in ecotone areas dominated by brush box and tallowwood.