David George Irwin (born 1 February 1959) [1] is a former rugby union player who played for Ireland and the British Lions.

Between 1980 and 1990, Irwin made 25 appearances for Ireland, scoring 8 points including 2 tries. [2] Helped Ireland win the 1982 Five Nations Championship and a Triple Crown.

In 1983 Irwin was also a member of the Lions squad that went on tour to New Zealand.

Irwin is currently the medical coordinator for Ulster Rugby, [3] as well as being a practising GP in Belfast. 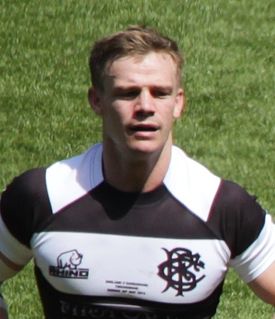 Tyrone Gyle Howe formerly played in rugby union on the wing for University of St Andrews RFC, Ulster, Ireland and the British and Irish Lions. 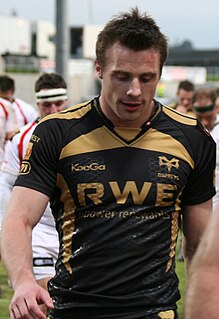 Rory David Best is an Irish former rugby union player from Northern Ireland and was the captain of the Ireland national team from 2016 to 2019. He played hooker for Ulster and was registered for Banbridge RFC, having previously represented the Newcastle Agrics. Best earned 124 caps for Ireland, making his debut in 2005 and retiring at the end of the 2019 Rugby World Cup, his fourth World Cup. Best is one of the most capped rugby players of all time, as well as the most-capped forward to ever represent Ireland.

Tom Court is an Australian-born former rugby union footballer. He most recently played for London Irish as a loosehead prop. He primarily played at tighthead in his early career at Ulster but switched to loosehead in the 2007/2008 season when BJ Botha arrived at Ulster.

Stephen Ferris is a retired Irish rugby union player who played for Ulster and represented Ireland internationally. Ferris played club rugby with Dungannon. He is from Maghaberry and attended Friends' School Lisburn. He played for Ulster and Ireland in all three backrow positions. Ferris retired for rugby in June 2014 after a long-standing ankle injury ended his career.

City of Derry Rugby Football Club is a rugby club, formed in 1881 in Derry, County Londonderry, Ireland. They currently play in Division 2C of the All-Ireland League. 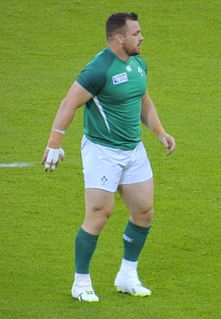 Albert Samuel "Alby" Mathewson is a New Zealand rugby union player. He plays as a scrum-half. He joined Irish province Ulster in July 2020.

Nigel Carr was an Ireland rugby union international whose promising career was cut short due to injuries sustained in an IRA bomb explosion. 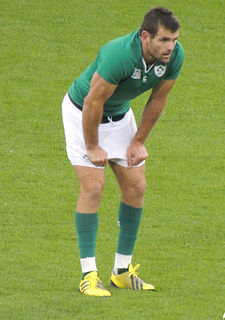 Jared Benjamin Payne is a retired rugby union centre who played for Ulster and the Ireland national team. He was a member of the 2017 British and Irish Lions tour to New Zealand, but did not play a test match.

Schalk Willem 'Hond' van der Merwe is a former South African rugby union player who last played for the Free State Cheetahs in the Currie Cup. He previously played for the Golden Lions, the Free State Cheetahs and the Griffons in domestic South African rugby, for the Lions and the Southern Kings in Super Rugby, for Montpellier in the French Top 14 and for Irish Pro14 side Ulster. His usual position is prop.