Donal Gerard Lenihan (born 12 September 1959) is a retired Irish rugby union player. He appears regularly as a co-commentator on TV and radio for rugby matches and writes for the Irish Examiner, as well as working as a financial consultant in Cork. Lenihan was inducted into the Munster Rugby Hall of Fame in April 2019. [2] He was awarded with the Guinness Rugby Writers of Ireland Hall of Fame in November 2013. He was awarded as Irish rugby’s ‘Player of the Decade’ for the 1980s by the Irish Times. Elected President Cork Constitution Football Club 2020-2021

Lenihan was raised in a sporting background. His father, Gerald Lenihan, was an All-Ireland heavyweight boxing champion and Gaelic footballer of distinction, and played in the same team as Jack Lynch. Donal attended primary school he attended Saint Patrick’s on Gardiner's Hill and afterwards went to Christian Brothers College, Cork. He captained his school to Munster Junior and Senior Schools titles and was also captained for Irish schools. [3] He was a student at UCC and played for the rugby team while studying there.

Lenihan played his first test match for Ireland on 21 November 1981 versus Australia at the age of 22. Famous for his aerial skills in the line-out, the second row was ever present in the Irish team for over a decade which saw two Triple Crowns and three Five Nations Championship victories. It was his break off the back of a line-out that set up Mike Kiernan's championship clinching drop-goal against England in 1985.

Lenihan played four matches in the inaugural 1987 Rugby World Cup where he was the Irish captain and played three matches in the 1991 Rugby World Cup. The Munsterman captained his country 17 times (3rd highest of the amateur era, 7th all-time). He was selected for three British and Irish Lions tours - 1983, 1986 (IRB Centenary Match), 1989 - and captained the Lions on a number of occasions during their victorious tour of 1989. [4] His 52nd and last Irish cap (6th highest of the amateur era) came against Wales on 18 January 1992.

After retirement from playing rugby, he took over as manager of Ireland in 1998, alongside coach Warren Gatland. [5] He stepped down as manager at the end of the 2000 season [6] to take over management of the British and Irish Lions for their 2001 tour to Australia with coach Sir Graham Henry. [7] 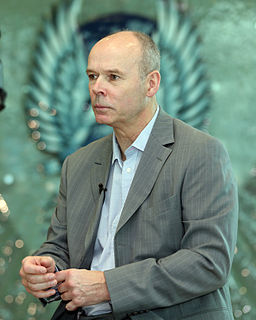 Sir Clive Ronald Woodward is an English former rugby union player and coach. He was coach of the England team from 1997 to 2004, managing them to victory in the 2003 Rugby World Cup. He also coached the 2005 British & Irish Lions tour to New Zealand, losing the test series 3-0. He is currently a pundit for ITV Sport, working on their coverage of the Six Nations and Rugby World Cup.

Brian Gerard O'Driscoll is an Irish former professional rugby union player. He played at outside centre for the Irish provincial team Leinster and for Ireland. He captained Ireland from 2003 until 2012, and captained the British & Irish Lions for their 2005 tour of New Zealand. He is regarded by critics as one of the greatest rugby players of all time.

Keith Wood is an Irish former international rugby union footballer who played hooker for Ireland, the British & Irish Lions, Garryowen, Harlequins and Munster. He was nicknamed 'The Raging Potato' because of his bald head. He was also known as 'Uncle Fester' due to his resemblance to the character in The Addams Family. Wood is considered by many to be the best hooker in rugby union during his era, winning the inaugural World Rugby Player of the Year, and among the best hookers in the history of rugby union. 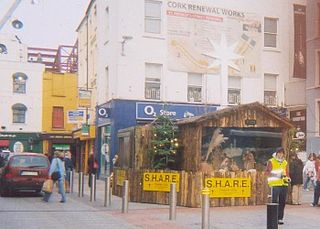 Shannon Rugby Football Club is the most successful club in the All Ireland League, having won the competition nine times. They hail from Limerick near the banks of the Shannon river. Shannon RFC is a member of the Irish Rugby Football Union Munster Branch. The club is one of the top amateur sides in Ireland has seen many of its players progress to professional and international rugby. The 1st XV plays in Division 1B of the All-Ireland League. While the women's side compete in Division 1 of the Munster League. Shannon RFC fields underage teams for boys and girls from u6s - u20s. Shannon RFC made history in 2017 as being the first club in the country to field a girls u20s side.

Dolphin Rugby Football Club is a rugby union club in Cork. It was founded in 1902, by members of Dolphin Swimming Club seeking to find a wintertime activity. They play in Division 2A of the All-Ireland League.

Gerard Cunningham is an Irish hurling manager and former player who played for Cork Senior Championship club St. Finbarr's. He played for the Cork senior hurling team for 20 years, during which time he lined out as a goalkeeper. Unchallenged in the number one position for his entire career, Cunningham is regarded as one of the greatest players of all time.

Jack O'Shea is a former Irish sportsperson. He played Gaelic football at various times with his local clubs St Mary's in Kerry and Leixlip in Kildare. He was a member of the Kerry senior football team from 1976 until 1992. O'Shea is regarded as one of the greatest players of all-time.

Mark Gerarde Ring played rugby union for Cardiff, Pontypool and Wales between 1982 and 1996. He was regarded as among the most gifted players of his generation but his career was hampered by serious injury.

Tom Cashman is an Irish retired hurler, coach and selector who played for Cork Senior Championship club Blackrock. He played for the Cork senior hurling team for 12 years. Equally comfortable as a half-back or at midfield, Cashman is regarded as one of the greatest players of all time.

Tomás Mulcahy is an Irish retired hurler and Gaelic footballer who played as a right corner-forward for the Cork senior hurling team.

Paul Stephen Wallace is a former Irish rugby union player who played tight head prop for Ireland and the British Lions. Wallace was once regarded as the world's best tight-head prop, and was known as a very effective scrummager, and a player with good ball skills.

University College Cork Rugby Football Club currently plays in Division 1A of the All-Ireland League. Founded in 1872, they originally played as Queen’s College Cork, as UCC was then known. Recent successes include winning the All Ireland U-20 Championship in 2002. In the same year, they also reached the AIB League playoffs for the first time, narrowly missing out on promotion to Division 1. Leading players in that team included Denis Leamy, Stephen Keogh and Frank Murphy, all of whom went on to play for Munster.

Peter O'Mahony is an Irish rugby union player. He plays for Munster in the Pro14 and European Rugby Champions Cup and Ireland internationally. During his career, O'Mahony has captained Presentation Brothers College, Ireland U18, Ireland U20, Munster, Ireland and the British & Irish Lions. He plays primarily as a flanker, but can also play at number 8, and represents Cork Constitution in the All-Ireland League.

John William Ryan is an Irish rugby union player for Munster in the Pro14 and European Rugby Champions Cup. He plays as a prop and represents Cork Constitution in the All-Ireland League.

Tadhg Gerard Beirne is an Irish rugby union player, currently playing for Munster in the Pro14 and the European Rugby Champions Cup. He primarily plays as a lock, but can also play in the back-row.