Nigel Carr (born 27 July 1959) was an Ireland rugby union international whose promising career was cut short due to injuries sustained in an IRA bomb explosion.

Carr was renowned as one half of an extremely effective back-row duo along with Phillip Matthews. They played together at Regent House Grammar School, Queen's University, Ards RFC, Ulster and Ireland in the late 1970s and into the 1980s. [2]

Matthews made his senior international debut against Scotland at Murrayfield on 2 February 1985 and was part of the Triple Crown winning side of 1985. He was on the subsequent 1985 Japan tour. He won his 12th and final cap in 1987 against Wales at Cardiff Arms Park. [3] Carr missed out on the inaugural 1987 Rugby World Cup because he was forced to prematurely end his career through injuries due to an IRA car-bomb. On 25 April 1987, Carr, David Irwin [ citation needed ] and Philip Rainey had set off for a training session in Dublin before the World Cup. On that day the IRA had targeted Lord Justice Sir Maurice Gibson - Northern Ireland's second most senior judge - who was travelling back from holiday with his wife, Lady Cecily Gibson, and a 500 lb land mine was detonated at Killean, on the border, killing them both. The three Ireland internationals were on the same stretch of road when the bomb exploded and although miraculously, they all escaped serious injury, the explosion ended Carr's rugby career at just 27. [4] Carr has been described as one of the best players to have pulled on the Irish jersey. Carr, although he never toured with the Lions, did play for them against The Rest of the World in a one-off game in Cardiff in 1986. [5] He also played for the Barbarians.

Bloody Friday is the name given to the bombings by the Provisional Irish Republican Army (IRA) in Belfast, Northern Ireland on 21 July 1972, during the Troubles. At least twenty bombs exploded in the space of eighty minutes, most within a half hour period. Most of them were car bombs and most targeted infrastructure, especially the transport network. Nine people were killed: five civilians, two British soldiers, a Royal Ulster Constabulary (RUC) reservist, and an Ulster Defence Association (UDA) member, while 130 were injured. The IRA said it sent telephoned warnings at least thirty minutes before each explosion and said that the security forces wilfully ignored some of the warnings for its own ends. The security forces said that was not the case and said they were overstretched by the sheer number of bombs and bomb warnings, some of which were hoaxes.

Bleddyn Llewellyn Williams MBE, was a Welsh rugby union centre. He played in 22 internationals for Wales, captaining them five times, winning each time, and captained the British Lions in 1950 for some of their tour of Australia and New Zealand. Considered to be the nonpareil of Welsh centres; he was robust in the tackle and known for his strong leadership and surging runs; he was often referred to as 'The Prince Of Centres'.

Cameron Michael Henderson GibsonMBE is a former rugby union player who represented Ireland and the British and Irish Lions at international level.

Robin Thompson was a rugby union international for Ireland and a former British Lions captain.

Regent House School is a coeducational controlled grammar school in Newtownards, County Down, Northern Ireland. It comprises two parts: the preparatory department, known as "the Prep", and the main school itself. It has over 1550 pupils from ages 4 to 18.

The Rt Hon. Sir Maurice Gibson, P.C., was a Lord Justice of Appeal in Northern Ireland. He was killed, along with his wife Cecily, Lady Gibson by the Provisional Irish Republican Army (IRA).

Rhodri Gwyn Jones is a former Wales international rugby union player. Jones played as a flanker and won 13 caps for Wales over a period of two years before a spinal injury ended his rugby career in December 1997.

Malone RFC is a rugby union club based in Belfast, in Northern Ireland. It is currently in the Division 1B of the All-Ireland League. The club is affiliated with the Ulster Branch, itself part of the Irish Rugby Football Union. It is one of the last remaining Belfast rugby clubs not to have amalgamated and still plays at its original ground. As well as its successful Senior teams, it has a thriving Youth and Mini structure, and was the first Mini rugby team from Ireland to play in the renowned Fundacion Cisneros International rugby tournament in Madrid. 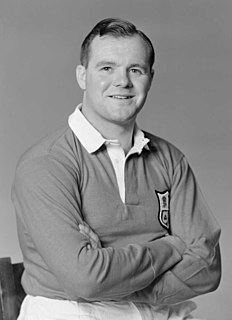 Jack Matthews was a Welsh physician and rugby union international centre who played first-class club rugby for Cardiff and Newport. Along with Bleddyn Williams, Matthews formed a centre partnership which is regarded as one of the finest in the game. He was also a devastating tackler, once described as "a cross between a bulldozer and a brick wall". Matthews won 17 caps for Wales and six with the British Lions, though his career was curtailed by the Second World War. Matthews was a general practitioner by profession and travelled with the 1980 Lions on their tour of South Africa as the team doctor.

This is a timeline of actions by the Irish National Liberation Army (INLA), an Irish republican socialist paramilitary group. Most of these actions took place as part of its 1975–1998 campaign during "the Troubles" in Northern Ireland. The INLA did not start claiming responsibility for its actions under the INLA name until January 1976 at which point they had already killed 12 people, before then they used the names People's Liberation Army (PLA) and People's Republican Army (PRA) to claim its attacks. 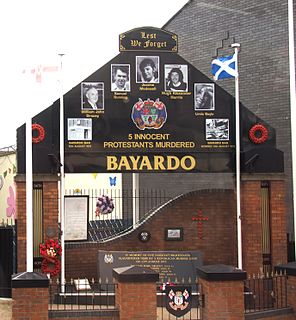 The Bayardo Bar attack took place on 13 August 1975 in Belfast, Northern Ireland. A unit of the Provisional Irish Republican Army (IRA), led by Brendan McFarlane, launched a bombing and shooting attack on a pub on Aberdeen Street, in the loyalist Shankill area. IRA members stated the pub was targeted because it was frequented by members of the Ulster Volunteer Force (UVF). Four Protestant civilians and one UVF member were killed, while more than fifty were injured.

The Teebane bombing took place on 17 January 1992 at a rural crossroads between Omagh and Cookstown in County Tyrone, Northern Ireland. A roadside bomb destroyed a van carrying 14 construction workers who had been repairing a British Army base in Omagh. Eight of the men were killed and the rest were wounded. The Provisional Irish Republican Army (IRA) claimed responsibility, saying that the workers were killed because they were "collaborating" with the "forces of occupation".

Between 26 November 1972 and 20 January 1973, there were four paramilitary bombings in the centre of Dublin, Ireland. Three civilians were killed and 185 people were injured. No group ever claimed responsibility for the attacks and nobody was ever charged in connection with the bombings. The first bombing in Burgh Quay may have been carried out by former associates of the Littlejohn brothers who were Secret Intelligence Service provocateurs, in a successful attempt to provoke an Irish government clampdown against the Provisional IRA, while the other three bombings were possibly perpetrated by loyalist paramilitaries, specifically the Ulster Volunteer Force (UVF), with British military or intelligence assistance. The UVF claimed in 1993 to have carried out the 1974 Dublin and Monaghan bombings which incurred the greatest loss of life in a single day throughout the 30-year conflict known as the Troubles.

Craig Gilroy is an Irish rugby union player from Belfast, Northern Ireland. He plays wing for Ulster and for Ireland. Gilroy made headlines with his try-scoring exploits in the victory over Munster in the April 2012 Heineken Cup quarter final. He also took part in the semi final against Edinburgh with which Ulster went through to the Heineken Cup final, winning 22–19. He scored a hat trick of tries against Italy in the Stadio Olympico in a convincing 63-10 win for Ireland in the 2017 six nations.