Declaration of Rights and Grievances

Last updated December 21, 2019
For the later declaration resulting from the 1774 Coercive Acts, see Declaration and Resolves of the First Continental Congress.

In response to the Stamp and Tea Acts, the Declaration of Rights and Grievances was a document written by the Stamp Act Congress and passed on October 14, 1765. American colonists opposed the acts because they were passed without the consideration of the colonists’ opinion (“No Taxation without Representation”).

The Declaration of Rights raised fourteen points of colonial protest but was not directed exclusively at the Stamp Act of 1765, which required that documents, newspapers, and playing cards be printed on special stamped and taxed paper. In addition to the specific protests of the Stamp Act taxes, it made the assertions which follow:

The Stamp Act of 1765 was an Act of the Parliament of Great Britain which imposed a direct tax on the British colonies in America and required that many printed materials in the colonies be produced on stamped paper produced in London, carrying an embossed revenue stamp. Printed materials included legal documents, magazines, playing cards, newspapers, and many other types of paper used throughout the colonies, and it had to be paid in British currency, not in colonial paper money.

The Intolerable Acts were punitive laws passed by the British Parliament in 1774 after the Boston Tea Party. The laws were meant to punish the Massachusetts colonists for their defiance in the Tea Party protest in reaction to changes in taxation by the British to the detriment of colonial goods. In Great Britain, these laws were referred to as the Coercive Acts.

Quartering Act is a name given to two or more Acts of British Parliament requiring local governments of the American colonies to provide the British soldiers with housing and food. Each of the Quartering Acts was an amendment to the Mutiny Act and required annual renewal by Parliament. They were originally intended as a response to issues that arose during the French and Indian War and soon became a source of tensions between the inhabitants of the Thirteen Colonies and the government in London, England. These tensions would later lead toward the American Revolution.

The American Colonies Act 1766, commonly known as the Declaratory Act, was an Act of the Parliament of Great Britain, which accompanied the repeal of the Stamp Act 1765 and the changing and lessening of the Sugar Act. Parliament repealed the Stamp Act because boycotts were hurting British trade and used the declaration to justify the repeal and save face. The declaration stated that the Parliament's authority was the same in America as in Britain and asserted Parliament's authority to pass laws that were binding on the American colonies. 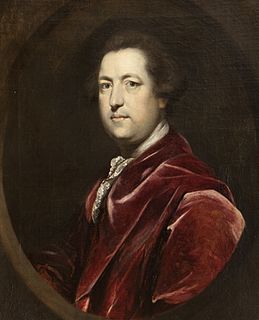 The Townshend Acts were a series of British acts of Parliament passed during 1767 and 1768 relating to the British colonies in America. They are named after Charles Townshend, the Chancellor of the Exchequer who proposed the program. Historians vary slightly as to which acts they include under the heading "Townshend Acts", but five are often listed:

The Stamp Act Congress, also known as the Continental Congress of 1765, was a meeting held in New York, New York, consisting of representatives from some of the British colonies in North America. It was the first gathering of elected representatives from several of the American colonies to devise a unified protest against new British taxation. Parliament had passed the Stamp Act, which required the use of specially stamped paper for legal documents, playing cards, calendars, newspapers, and dice for virtually all business in the colonies starting on November 1, 1765.

"No taxation without representation" is a political slogan originating during the 1700s that summarized one of 27 colonial grievances of the American colonists in the Thirteen Colonies, which was one of the major causes of the American Revolution. In short, many in those colonies believed that, as they were not directly represented in the distant British Parliament, any laws it passed affecting the colonists were illegal under the Bill of Rights 1689, and were a denial of their rights as Englishmen.

A stamp act is any legislation that requires a tax to be paid on the transfer of certain documents. Those who pay the tax receive an official stamp on their documents, making them legal documents. A variety of products have been covered by stamp acts including playing cards, dice, patent medicines, cheques, mortgages, contracts, marriage licenses and newspapers. The items often have to be physically stamped at approved government offices following payment of the duty, although methods involving annual payment of a fixed sum or purchase of adhesive stamps are more practical and common.

Declaration of Rights may refer to: 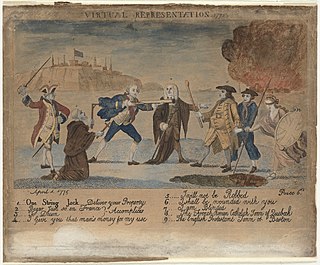 Virtual representation refers to the idea that the members of Parliament, including the Lords and the Crown-in-Parliament, reserved the right to speak for the interests of all British subjects, rather than for the interests of only the district that elected them or for the regions in which they held peerages and spiritual sway. Virtual representation was the British response to the First Continental Congress in the American colonies. The Second Continental Congress asked for representation in Parliament in the Suffolk Resolves, also known as the first Olive Branch Petition. Parliament claimed that their members had the well being of the colonists in mind. The Colonies rejected this premise. 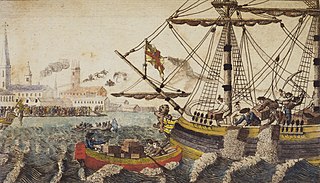 The Boston Tea Party was a political and mercantile protest by the Sons of Liberty in Boston, Massachusetts, on December 16, 1773. The target was the Tea Act of May 10, 1773, which allowed the British East India company to sell tea from China in American colonies without paying taxes apart from those imposed by the Townshend Acts. American Patriots strongly opposed the taxes in the Townshend Act as a violation of their rights. Demonstrators, some disguised as Native Americans, destroyed an entire shipment of tea sent by the East India Company.

The Petition to the King was a petition sent to King George III by the First Continental Congress in 1774, calling for repeal of the Intolerable Acts.

Oliver Partridge (1712-1792) was a military commander, politician and early American patriot. He represented Massachusetts at the Albany Congress of 1754, and at the Stamp Act Congress of 1765 where he supported resistance to the British Stamp Act in the events leading up to the American Revolution.

The Braintree Instructions was a document sent on September 24, 1765 by the town meeting of Braintree, Massachusetts to the town's representative at the Massachusetts General Court, or legislature, which instructed the representative to oppose the Stamp Act, a tax regime which had recently been adopted by the British Parliament in London. The document is significant because, following the Virginia Resolves, it was among the earliest in British America to officially reject the authority of Parliament over the colonies in North America. The instructions were written by John Adams, who would ten years later become a key figure in the American Revolution and ultimately be elected the second President of the United States in 1796.

The constitutional history of opposition to taxation is sufficiently interesting to be abstracted from broader contexts. Key action occurred in the Colony of Virginia in the decade before 1776. A particular protest document, arguably the most eloquent and most effective among many colonial protests, merits special attention.

Rowan Resolves is the short name for a colonial era document called Resolutions by inhabitants of Rowan County concerning resistance to Parliamentary taxation and the Provincial Congress of North Carolina. It was signed in Salisbury, Rowan County, in the royal Province of North Carolina on August 8, 1774 in response to a series of punitive laws passed by the British Parliament in 1774, the Intolerable Acts, after the political protest against Tea Act in Boston, the Colony of Massachusetts Bay, commonly known as Boston Tea Party. Rowan County was the first county in North Carolina to adopt such resolutions in the early stages of American Revolution.

The grievances/complaints was a section from the Declaration of Independence where the colonists listed their former problems with the British government but specifically King George. The United States Declaration of Independence contains 27 grievances against the decisions and actions of British King George III. Historians have noted the similarities with John Locke's works and the context of the grievances. Historical precedents such as Magna Carta and the Bill of Rights 1689 had established the principle that the King was not to interfere with the Rights of Englishmen held by the people. In the view of the American colonies, the King had opposed the very purpose of government by opposing laws deemed necessary for the public good.