Del Amitri's founding member and main songwriter, Justin Currie, explained in 2010 that the band's name "was invented to be meaningless – basically a corruption of the Greek name 'Dimitri'." [8] In 2018, Currie clarified that 'Del Amitri' is a bastardisation of the name of a film producer who appeared in the closing credits of a film he saw in 1979 – "probably Dimitri-something, but we couldn't remember... so eventually through osmosis or maybe Chinese Whispers 'Dimitri' became 'Del Amitri'." [9] Many sources have repeated a claim that the name was chosen because it is Greek for "from the womb", [10] but this is untrue. [11]

Del Amitri grew out of Justin Currie's Jordanhill College School band. The band was formed with the original line-up of Currie (bass and vocals), James Scobbie (guitars), Donald Bentley (guitars) and Paul Tyagi (drums). Scobbie and Bentley left the band in 1982 to study at university. A new line-up came together after Currie placed an advertisement in the window of a music store. Scobbie and Bentley were replaced by Iain Harvie (guitar) and Bryan Tolland (second guitar). From then on, Currie and Harvie have remained the only constant members of the band.[ citation needed ]

In 1984, Del Amitri were signed by Chrysalis Records, which released their eponymous debut album in 1985. [12]

As recording started for what would become Del Amitri's second album, the line-up changed. Currie and Harvie invited keyboard player Andy Alston to join the band and fired both guitarist Bryan Tolland and drummer Paul Tyagi. Tolland was replaced in the studio by Mick Slaven [12] and Tyagi by The Commotions' Stephen Irvine. However, Slaven and Irvine chose not to join the band full-time and were replaced by David Cummings and Brian McDermott, respectively. [12]

Released in 1989, Waking Hours reached No.6 in the UK Albums Chart and gave the band their most successful UK single, "Nothing Ever Happens", which peaked at No 11. They also gained some mainstream exposure abroad for the first time, as Waking Hours was a success in several territories with the single "Kiss This Thing Goodbye" flirting with the lower reaches of the US Billboard Hot 100's Top 40. In between Waking Hours and their next album, the band released the single "Spit in the Rain", which reached No. 21 in the UK. [12]

The line-up of Currie, Harvie, Alston, Cummings and McDermott proved to be stable and successful. They stayed together to record the follow-up album Change Everything , which was released in 1992 and became the band's biggest chart success, reaching No. 2 in the UK, being held off top spot only by Lionel Ritchie's best-of collection, Back to Front . The single "Always the Last to Know" peaked at No. 13 in the UK, and again provided them with an entry into Top 40 in the US. [12] The video for the song was directed by Oil Factory's Pedro Romhanyi. [13] Their increasing success in the USA led to appearances on the television show Late Night with David Letterman [14] and the Woodstock '94 anniversary festival. [15]

Twisted was released in 1995 and peaked at No. 3 in the UK. Ash Soan joined the band as a permanent member after touring with them on drums starting in 1994; although on the album, drums were played by Chris Sharrock. [16]

The single "Roll to Me", only a moderate hit in the UK where it reached No. 22, reached the Top 10 in the US charts; this was a noteworthy achievement during an era when British acts were finding success in the US difficult. [4]

The band found it harder to capitalise on their previous successes in the US, however, and lost out on more airplay at home when their record company took the decision to withdraw the album's planned third single "Medicine" in September 1997, putting out a false press story that the lyrics could be interpreted as a critique of the then recently deceased Diana, Princess of Wales. [18]

Five years passed before Del Amitri released another album. In 1998, however, they recorded the official anthem for the Scottish World Cup squad, "Don't Come Home Too Soon". It reached No. 15 on the charts, becoming their third biggest UK hit and their last Top 20 entry to date.[ citation needed ] They also released a best of album, Hatful of Rain: The Best of Del Amitri , which was a No. 5 success in the UK Albums Chart[ citation needed ] and was accompanied by a new track, "Cry to Be Found", which reached No. 40. [19]

The album Can You Do Me Good? was released in the spring of 2002. Both the album and the single "Just Before You Leave", reached the Top 40. The band then went on hiatus. [20]

On 18 August 2013, during an interview with Terry Wogan on his BBC Radio 2 programme, Currie hinted at a Del Amitri reunion. A UK tour was subsequently announced. As part of the tour, the band played to 8,000 people in the SSE Hydro, Glasgow on 24 January 2014. A live album, called Into The Mirror, was released following the tour. [21]

Del Amitri reformed again in July 2018, playing eight dates in seven UK cities. Their live set included a new song, 'You Can't Go Back', and a cover of Twenty One Pilots' hit song, "Heathens". In July 2018, Currie said that a new group album and further activity was possible. [22]

On 2 March 2020, drummer Ash Soan revealed that work on Del Amitri's seventh studio album had begun at Vada Studios, Worcestershire. [23] On 8 April, Justin Currie confirmed that the band finished recording the album "the night before the UK-wide lockdown" began on 24 March, and that they expected to tour in January 2021, following a one-off free show in December 2020 for Scottish NHS workers. [24] On 5 May via a short video clip, the band announced that they had signed to Cooking Vinyl.

In November 2020, the band announced new single "Close Your Eyes And Think of England" and released the album title Fatal Mistakes. The album was released by Cooking Vinyl on 28 May 2021 [25] alongside bonus album Outtakes & B-side (the latter of which is available for a limited period with the parent album). [26] In its first week of release, Fatal Mistakes landed at No. 5 on the UK Album Chart, [27] marking the band's sixth album to reach the UK Top 10. [28]

Del Amitri announced a tour in support of Fatal Mistakes will begin in September 2021, concluding with a hometown show at Glasgow on 20 December 2021. [29]

Del Amitri announced through their Instagram that a new documentary on the band had been made entitled "You Can't Go Back". [30] The film is set to premiere on British TV channel Sky Arts on September 4.

Del Amitri operates as a "benign dictatorship" under its main songwriters, Currie and Harvie. [31]

Justin Robert Currie is a Scottish singer and songwriter best known as a founding member of the band Del Amitri. 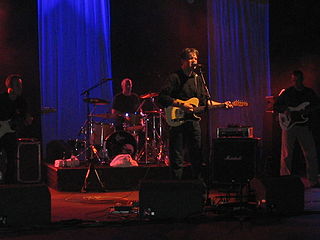 Lloyd Cole and the Commotions were a British rock/pop band that formed in Glasgow, Scotland in 1982. Between 1984 and 1989, the band scored four Top 20 albums and five Top 40 singles in the UK; it also had success in several other countries including Australia, the Netherlands, Sweden and New Zealand. After they broke up in 1989, Cole embarked on a solo career but the band reformed briefly in 2004 to perform a 20th anniversary mini-tour of the UK and Ireland.

Iain Wallace Harvie is the guitarist with the Scottish rock band Del Amitri. Along with lead singer and bassist Justin Currie, Harvie is one of only two members to be present throughout Del Amitri's history since its 1982 inception. He is also the co-writer, with Currie, of many of the group's songs. 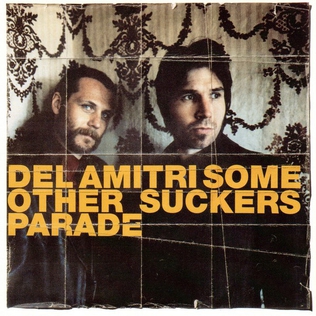 Some Other Sucker's Parade is the fifth studio album by Del Amitri, released on 24 June 1997. It reached number 6 in the UK Albums Chart.

Twisted is the fourth studio album by Del Amitri, released on 28 February 1995. It reached number three in the UK Albums Chart and was listed by Q Magazine as one of the top 10 best albums of 1995. 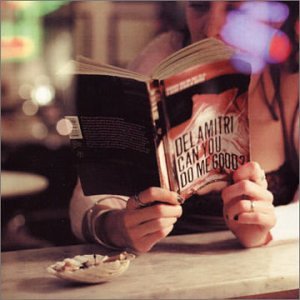 Can You Do Me Good? is the sixth studio album by Del Amitri.

Waking Hours is the second studio album by Scottish alternative rock band Del Amitri, released in July 1989. It reached number 6 in the UK Albums Chart and featured one of the band's most famous songs, "Nothing Ever Happens", which reached number 11 in the UK Singles Chart. The album's opening track, "Kiss This Thing Goodbye", entered the top 40 of the US Billboard Hot 100 when released as a single for the second time.

The Uncle Devil Show are a folk-pop guitar band formed as a side-project for three Scottish musicians, who use pseudonyms.

Pele were an English indie rock band, formed in Ellesmere Port, Cheshire, England in 1990, by the guitarist and frontman Ian Prowse and keyboard player Andrew Roberts. They were joined by Dally on drums, Jimmy McAllister on bass guitar and finally Nico on violin. Despite never reaching the Top 40 of the UK Singles Chart, the band built up a loyal live following, but split in 1995 due to a legal wrangle with their record label.

Del Amitri is the eponymous debut album by the Scottish rock band Del Amitri, released in 1985 by Chrysalis Records. Two singles were released, "Sticks And Stones, Girl" and "Hammering Heart". Neither single charted. A CD reissue in 2003 included the four bonus tracks. 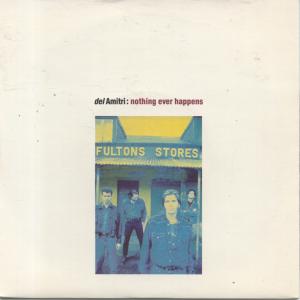 "Nothing Ever Happens" is a song by the Scottish rock band Del Amitri.

"Don't Come Home Too Soon" was a single released by Scottish band Del Amitri to mark the Scottish football team's qualification for the 1998 World Cup in France. The single reached No. 15 in the UK Singles Chart and topped the Scottish Singles Chart in June 1998.

What Is Love For is the first solo album by singer/songwriter Justin Currie, best known for his involvement in the band Del Amitri.

Lousy with Love is an album by Del Amitri, released in September, 1998. It is a compilation of songs unreleased on their other albums.

Fatal Mistakes is the seventh studio album by the Scottish band Del Amitri, released on 28 May 2021. It is the band's first studio album since 2002's Can You Do Me Good. It debuted at number five on the UK Albums Chart in the first week following its release.