The Official Albums Chart is a list of albums ranked by physical and digital sales and (from March 2015) audio streaming [1] in the United Kingdom. It was published for the first time on 22 July 1956 and is compiled every week by the Official Charts Company (OCC) on Fridays (previously Sundays). It is broadcast on BBC Radio 1 (top 5) and published in Music Week magazine (top 75), and on the OCC website (top 100).

To qualify for the Official Albums Chart, the album must be the correct length and price. It must be more than three tracks or 20 minutes long and not be classed as a budget album. A budget album costs between £compilation albums – which until January 1989 were included in the main album listing – are now listed separately in the "Official Compilation Chart". Full details of the rules can be found on the OCC website. [2]

According to the canon of the OCC, the official British albums chart was the Record Mirror chart from 22 July 1956 to 1 November 1958; the Melody Maker chart from 8 November 1958 to March 1960; [3] the Record Retailer chart from 1960 to 1969; and the Official Albums Chart from 1969 on. For eight weeks in February and March 1971 no Official Albums Chart was compiled due to a postal strike - for this period, the OCC uses the chart compiled by Melody Maker instead. [4]

Though album sales tend to produce more revenue and, over time, act as a greater measure of an artist's success, this chart receives less media attention than the UK Singles Chart, because overall sales of an album are more important than its peak position. 2005 saw a record number of artist album sales with 126.2  million sold in the UK. [5] In February 2015, it was announced that due to the falling sales of albums and rise in popularity of audio streaming, the Official Albums Chart would begin including streaming data from March 2015. [1] Under the revised methodology, the Official Charts Company takes the 12 most streamed tracks from one album, with the top-two songs being down-weighted in line with the average of the rest. The total of these streams is divided by 1000 and added to the pure sales of the album. This calculation was designed to ensure that the chart rundown continues to reflect the popularity of the albums themselves, rather than just the performance of one or two smash hit singles. The final number one album on the UK Albums Chart to be based purely on sales alone was Smoke + Mirrors by Imagine Dragons. On 1 March 2015, In the Lonely Hour by Sam Smith became the first album to top the new streaming-incorporated Official Albums Chart. [6]

Queen's Greatest Hits is the best-selling album in UK chart history, with six million copies sold as of February 2014. [13] Previous first-place holder The Beatles' Sgt. Pepper's Lonely Hearts Club Band is now in third-place after being supplanted by Queen and then by ABBA's Gold: Greatest Hits . Both albums have sold in excess of 5.1 million copies. [14] The longest running number one album, both consecutively and non-consecutively, is the soundtrack of the film South Pacific . It had a consecutive run of 70 weeks from November 1958 to March 1960, and had further runs at the top in 1960 and 1961, making a non-consecutive total of 115 weeks.

The youngest artist to top the chart is Neil Reid, whose debut album topped the chart in 1972 when he was only 12 years old. [16] The oldest living artist to top the charts is Vera Lynn at the age of 92 with We'll Meet Again: The Very Best of Vera Lynn , released in 2009 (though the album only contains material she recorded between 1936 and 1959). Lynn also holds the record for the oldest living artist to have a chart album, with the 2017 release of Vera Lynn 100 , released to mark her 100th birthday (though again, this only contains material she recorded decades earlier). The album peaked at number 3.

In 1980, Kate Bush became the first British female artist to have a number-one album in the UK with Never for Ever , as well as being the first album by any female solo artist to enter the chart at number 1. In August 2014 she became the first female artist to have eight albums in the Official UK Top 40 Albums Chart simultaneously, (altogether she had eleven albums in the Top 50 in one week). [17] She is currently in fourth place for artists having the most simultaneous UK Top 40 albums, behind Elvis Presley and David Bowie who both tie for the most simultaneous Top 40 albums (twelve each, both immediately following their deaths in 1977 and 2016 respectively), [18] and The Beatles who had eleven in 2009 when remastered versions of their albums were released.

The first studio album and non soundtrack or cast recording album to top year-end chart was With the Beatles by The Beatles in 1963, they became the first group to achieve this feat. Elton John's Don't Shoot Me I'm Only the Piano Player in 1973, marks the first album by male artist and solo act to do so. The fitst woman to reach year-end best seller was Barbra Streisand in 1982, for Love Songs .

The first studio album and non soundtrack or cast recording album to top decade-end chart was Sgt. Pepper's Lonely Hearts Club Band by The Beatles in 1960s, they became the first group act to achieve this. James Blunt's Back to Bedlam in 2000s, marks the first album by male artist and solo act to do it. Blunt was the only performer in history to top decade chart with debut album. The fitst woman to reach this feat was Adele in 2010s, with 21.

Dua Lipa's Future Nostalgia holds the record for having the lowest one-week sales while at the top of the chart in the modern era, when it was number one the week beginning 15 May 2020 with sales of only 7,317.

Sam Smith holds the record for most weeks spent in the Top 10 by a debut album with In the Lonely Hour , with 76, surpassing a record previously held by Emeli Sandé. [22]

The UK Singles Chart was first compiled in 1969. However the records and statistics listed here date back to 1952 because the Official Charts Company counts a selected period of the New Musical Express chart and the Record Retailer chart from 1960 to 1969 as predecessors for the period prior to 11 February 1969, where multiples of competing charts coexisted side by side. For example, the BBC compiled its own chart based on an average of the music papers of the time; many songs announced as having reached number one on BBC Radio and Top of the Pops prior to 1969 may not be listed here as chart-toppers since they do not meet the legacy criteria of the Charts Company.

The Official Charts Company, also referred to as Official Charts is a British inter-professional organisation that compiles various "official" record charts in the United Kingdom, including the UK Singles Chart, the UK Albums Chart, the UK Singles Downloads Chart and the UK Album Downloads Chart, as well as genre-specific and music video charts. The OCC produces its charts by gathering and combining sales data from retailers through market researchers Millward Brown, and claims to cover 99% of the singles market and 95% of the album market, and aims to collect data from any retailer who sells more than 100 chart items per week. In 2017, the OCC made a deal with the Irish Recorded Music Association (IRMA) to compile the Irish Singles Chart, Irish Albums Chart and other Irish charts on behalf of IRMA. The deal will run for five years.

This is a discography of albums by American singer Elvis Presley, from his debut in 1956. The Recording Industry Association of America (RIAA) first began tracking sales of Elvis Presley in 1958, who did not receive his first Gold Album award until that year. In August 1992, he was awarded with 110 gold, platinum and multi-platinum albums and singles, the largest presentation of gold and platinum record awards in history. According to the latest data from the RIAA website, Elvis has a total of 101 gold, 57 platinum and 25 multi-platinum album awards by the organization. According to RIAA, he has sold over 139 million albums units only in the United States, making him the second best selling solo albums artist of all time in this country, and the biggest selling solo artist of all time. He is in the U.S second overall, behind The Beatles and Garth Brooks. Estimation sales for Elvis are over 600 million record sold worldwide which makes him one of the best selling artist of all time. 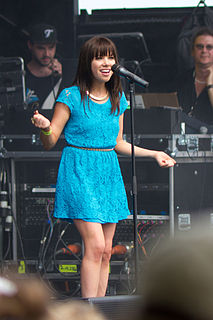 The Official Audio Streaming Chart is a music chart based on plays of songs through audio streaming services in the United Kingdom. It features data from both premium and ad-supported services. It is compiled weekly by the Official Charts Company (OCC), and was initially published both on their official website OfficialCharts.com, and in the magazine Music Week.

The UK Album Downloads Chart is compiled by the Official Charts Company (OCC) on behalf of the music industry. Since July 2015, the chart week runs from Friday to Thursday, with the chart date given as the following Thursday. The chart was introduced in April 2006 to coincide with the OCC's decision to include sales of album downloads in the UK Albums Chart. The first album to top the download chart was This New Day by Embrace. 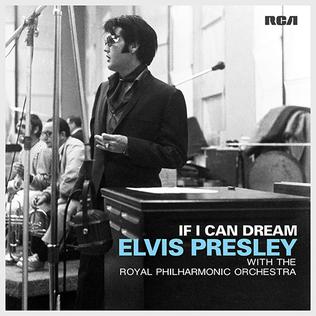 If I Can Dream is a compilation album by American singer Elvis Presley. It was released on October 30, 2015 by RCA Records and Legacy Recordings. The album features archival vocal recordings of Presley accompanied by new orchestral arrangements by the Royal Philharmonic Orchestra. It also features duets with Canadian singer Michael Bublé and Italian trio Il Volo. If I Can Dream was recorded at Abbey Road Studios in London, England, and it was produced by Nick Patrick and Don Reedman, with piano orchestration by Dominic Ferris..

The Wonder of You is a compilation album by American singer Elvis Presley (1935–77). It was released on October 21, 2016 by RCA Records and Legacy Recordings. The album features archival vocal recordings of Elvis accompanied by new orchestral arrangements by the Royal Philharmonic Orchestra, recorded at the Abbey Road Studios. It also features a duet with German singer Helene Fischer.