Having graduated from college with an OND in electronic principles, Parsons started her career working in the television industry, where she was a sound engineer and later a vision mixer. [2] She was a DJ on the pirate soul station JFM before moving to a Saturday night pop music programme at County Sound in Guildford. [3] In radio, she joined London's Capital London in 1987 as a weeknight presenter, before moving to BBC Radio 1 in 1991. Initially she was an overnight presenter, but later hosted other shows, and during her time with the network she became the last person to interview the comedian Peter Cook. [2] After leaving Radio 1, she joined Virgin Radio in 1996, spending two years as a presenter there. [2]

In 1998, Parsons joined BBC Radio 2, taking over the Friday and Saturday overnight slot, where she remained as a full-time presenter until 2003. [2] She was also briefly a presenter of the weekday late show during 1999 whilst fellow DJ Richard Allinson covered the drivetime slot. [2] In 2001, Parsons' show received two hours of phone calls after rival Virgin Radio DJ Jon Holmes requested that his listeners call Parsons to request John Denver's Annie's Song be played. [4] From 2003 she was a stand-in presenter on the network. She had her own early Sunday morning show on Radio 2 from January to April 2010, [5] and later that year stood in for Sarah Kennedy after Kennedy was absent from her Dawn Patrol programme. It was announced on 3 September that Kennedy would not be returning to the network and that Parsons would continue to present the show until a shake up of the Radio 2 schedule in October. [6] In January 2012 it was confirmed she would provide cover for the 6 –8 am Saturday breakfast slot after Zoe Ball announced her decision to leave the show, and until another regular presenter was appointed. [7]

She joined 102.2 Smooth Radio in London following its launch in March 2007, [8] [9] later becoming a presenter on its successor, Smooth Radio. In January 2008 she took over the station's afternoon slot following the death of fellow DJ Kevin Greening. From October 2010 she was the breakfast show presenter on the new national Smooth Radio, a role which was taken over by Simon Bates when Bates joined the network in January 2011. [10] Parsons then returned to the weekend mid-morning show. In October 2012 Parsons was confirmed as the new host of the weekday mid morning show on Smooth, replacing Mark Goodier from December. She would be succeeded as weekend presenter by David Prever, who was previously a stand-in presenter at the network. [11] Parsons left Smooth Radio on 28 February 2014. [12]

On 11 September 2014, the Radio Today website reported that Parsons would join Jazz FM to present the station's breakfast show, The Jazz Breakfast. She joined Jazz FM from 15 September as part of an overhaul of their schedule. [13] She left Jazz FM on Friday 2 October 2015, and she joined Magic Radio in 2016.

Her hobbies and interests include Feng Shui, science, the paranormal, English literature, antiques and swimming. She is a regular participant in the 26 mile moonlight walkathon. [2] 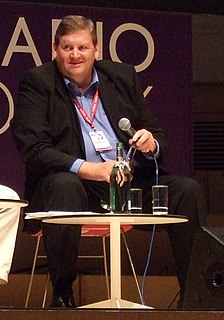 John Myers was a British radio executive, consultant and presenter. He was Chairman of the UK Radio Academy Awards, The Commercial Radio Awards and owner of Myers Media. Myers developed the Century Radio brand for Border Radio Holdings in the early 1990s, launching two more stations later in the decade. He presented programmes under the pseudonym "John Morgan". He then became Chief executive of GMG Radio, developing the Real Radio, Smooth Radio and Rock Radio brands and overseeing GMG Radio's acquisition of the Century network from GCap Media. He served as Chief executive of The Radio Academy from April 2011 until June 2012 and the founding Chairman of TeamRock, retiring in May 2016.

This is a list of events in British radio during 2011.

Simon Bates at Breakfast was the flagship show on Smooth Radio in the United Kingdom from January 2011 to March 2014. It was presented by Simon Bates, who took on the role of the station's breakfast show presenter on 4 January 2011, having left his long-term show at Classic FM in order to take up the position. The programme aired on weekdays from 6.00am to 10.00am, and included Our Tune and The Golden Hour, two features Bates had previously presented on BBC Radio 1. Bates occasionally took the show out on location for special editions, such as a week-long broadcast from Camp Bastion in December 2011 and the Falkland Islands in June 2012.

Jamie Crick is a British radio broadcaster. Formerly a presenter on Classic FM; he is now associated with Jazz FM and Encore Radio. Since March 2019 he has hosted a Sunday morning classical radio show on Scala Radio.

A timeline of notable events relating to Heart, a 22-strong network of adult contemporary commercial radio stations operated by Global.

A timeline of notable events relating to Magic 105.4, a commercial radio station operated by Bauer Radio, and the former Magic Network broadcast on AM stations in the north of England.

A timeline of notable events relating to Jazz FM, a radio station in the United Kingdom, and its predecessors 102.2 Jazz FM and 100.4 Jazz FM.