Butler-Henderson was born into a racing family. Her grandfather used to race a Frazer Nash at Brooklands, her father was in the British karting team and her brother Charlie is a racing driver. She has an older sister, Lottie, who does not race[ citation needed ]. Butler-Henderson grew up on the family farm, and was educated at the independent Perse School for Girls in Cambridge. [3] She is the great-granddaughter of Eric Butler-Henderson, a director of the Great Central Railway, after whom the preserved GCR Class 11F locomotive Butler-Henderson is named.

Butler-Henderson started racing karts at the age of 12, being overtaken by David Coulthard in her first race. [4] She holds a car race licence as well as a power boat racing licence. After supplementing her income as a racing instructor at Silverstone Circuit, she also undertook a dual career in journalism where she worked on numerous British motoring magazines including Auto Express , What Car? and Performance Car . She was the assistant launch editor and mechanic in Max Power magazine, referred to simply as "VBH." [3]

In 1997, she joined the BBC's flagship motoring show Top Gear . After the BBC cancelled the original show in 2001, Butler-Henderson, along with co-presenters Quentin Willson and Tiff Needell, moved to Channel 5 in 2002 to continue their work on a show now called Fifth Gear. In 2004, she presented ITV's coverage of the British Touring Car Championship, in which her brother Charlie briefly competed in 2004; and from February 2006 the ten-part series Wrecks To Riches for Discovery Real Time. [5]

Butler-Henderson has in later years broadened her media career outside racing and cars to become a general presenter. After co-hosting radio shows on Virgin Radio, in 2005, she presented a daytime television show for ITV called Date My Daughter in which a single man 'dates' three mothers after which they decide if he is worthy enough to date their daughter. [6]

She has recorded voice overs for radio and television advertisements, including Wrigleys Extra Thin Ice and Sony Centres. She also provided a voiceover for the PlayStation 2 game Gran Turismo 4 Prologue . In January 2006, Butler-Henderson appeared in a TV commercial for the Kent & Medway Safety Camera Partnership [7] in which she stated that the Partnership "don't want your cash, they just want you to slow down". Butler-Henderson was also a narrator for National Geographic Channel (UK)'s science documentary entitled I Didn't Know That . In 2009, she starred in several Dutch commercials for Toyota. She worked at Absolute Radio doing traffic news on the Christian O'Connell Breakfast Show. She left the breakfast show on 9 July 2009. [8]

Butler-Henderson lent her views in the Golden Garages Award, [9] a search for the United Kingdom's best garage run by Motor Codes. Butler-Henderson was part of a professional panel of six independent judges including the Telegraph's Honest John [10] and motoring editor of Which? magazine, Richard Headland. She later presented the prize in person to the winners of the competition, Kinghams of Croydon. [11]

In 2016, Butler-Henderson's fourteen-year stint at Fifth Gear ended after the show was cancelled. In 2018, the programme returned on Quest with all of the original presenters (incl. Butler-Henderson) returning. [12]

In 2007 Butler-Henderson married television producer and director Phil Churchward. Churchward worked on several motoring programmes as a producer of Fifth Gear , series director of Top Gear and The Grand Tour . [13]

At Autosport International on 15 January 2011, Butler-Henderson's Fifth Gear co-presenter Jason Plato announced that she would not be able to attend as she was having a baby girl. Her second child, a son, was born in 2015. [15] 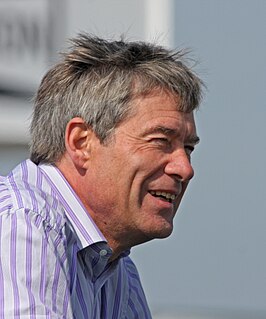 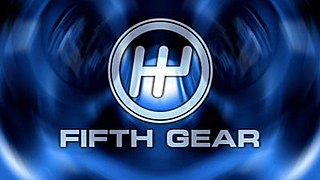 Fifth Gear is a British motoring television magazine series. It was originally broadcast on Channel 5 from 2002 to 2011, afterwards moving to Discovery Channel in 2012, and then in 2015 to History. Since its return in 2018, it has been broadcast on Quest. The show is currently presented by Vicki Butler-Henderson, Jonny Smith and Jason Plato. Its former presenters include former racing driver Tiff Needell and Car SOS host Tim Shaw. 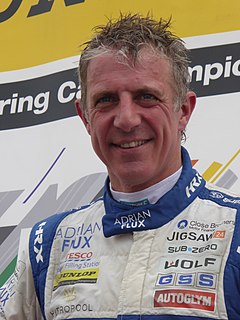 Timothy Jason Plato is a British racing driver currently competing in the British Touring Car Championship (BTCC) for Power Maxed Racing. He has twice been BTCC Champion, in 2001 for Vauxhall and 2010 for Silverline Chevrolet. He has finished in the top 3 in the Championship 12 times and holds the record for the most overall race wins in the BTCC. He is also a presenter on the motoring television series Fifth Gear from 2004 to present.

Cadwell Park is a motor racing circuit in Lincolnshire, England, 5 miles (8 km) south of Louth owned and operated by MotorSport Vision, a business associated with former racing driver Jonathan Palmer. Sited on former parkland across a steep-sided valley with dips and crests, the circuit features sharp changes in gradient, including one section called The Mountain where bikes can become airborne by up to several feet. Its mix of challenging corners has led to its nickname as the Mini-Nürburgring.

Max Power was a British magazine, based in Peterborough, focusing on the performance-tuning and car market. 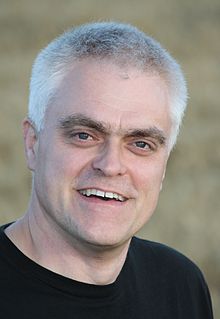 Jon Bentley is a British journalist and television presenter; he was educated at Millfield and at Oriel College, Oxford.

Stars in Fast Cars is a motoring-themed celebrity game show, in which celebrities compete in motoring challenges, including recreating movie stunts and racing modified armchairs. The series was first broadcast on BBC Three, in 2005, and repeated on BBC One in 2006. 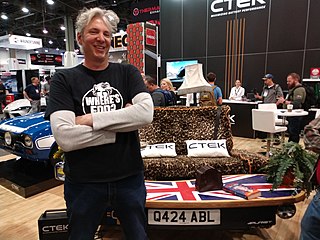 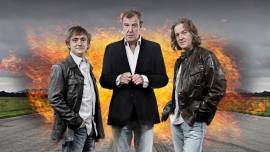 Series 10 of Top Gear, a British motoring magazine and factual television programme, was broadcast in the United Kingdom on BBC Two during 2007, consisting of ten episodes that were aired between 7 October and 23 December. This series saw the props used on the programme being changed from car-based seating and a wide-screen monitor in the main set space, to wingback chairs and an old TV screen; although attributed to a fire caused by Top Gear's rival programme, it later was exposed as a publicity stunt, with the props replaced the following series. This series' highlights included the presenters crossing Botswana on a road trip, a race between a car and a fighter jet, fording amphibious cars across the English Channel, and competing in a 24-hour endurance race using home-made bio-diesel.

Alexander John Riley is an English TV and radio presenter.

Sally Boazman is a British radio traffic reporter on the national BBC Radio 2. Her reporting truly revolutionised United Kingdom traffic news with the addition of live reports from motorists on mobile phones and lorry drivers on CB radio.

Rory Reid is an English television presenter specialising in motoring and technology. He presents on the YouTube car channel Auto Trader Group and previously on Sky Television's Gadget Geeks, CNET's Car Tech channel and on the YouTube car channel Fast, Furious & Funny. He was editor-in-chief for the website Recombu and has worked on BBC Radio 5 Live's Saturday Edition as a technology journalist. 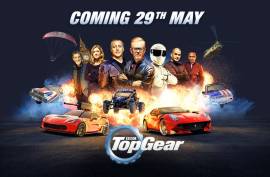