Ray Cokes (born Raymond Christopher Cokes on 24 February 1958 on the Isle of Wight) is an English television presenter.

Ray's father was an officer in the Royal Navy, who was stationed at various navy bases around the world. When Ray was 15 the family permanently moved back to Britain. At age 20 Ray had become a punk and moved to Belgium, where he took on various jobs, including being a DJ in a club and on a local radio station. This led to a job as a music presenter on Belgian national TV channel RTBF in 1982, where he presented the show Rox Box (in French) which featured alternative music videos and live studio performances. [1]

When MTV Europe launched in 1987 he became a Video Jockey mainly co presenting along side Marcel Vanthilt.

Between 1992 and 1995, Cokes hosted MTV Europe's live television series MTV's Most Wanted , an award-winning daily show which soon became the most popular on channel with its zoo tv format. The studio crew were as big as the celebrities who appeared on the show, including Rob & Andy the cameramen, Floor manager Nina and perfectic Pat. Each night (Tues to Fri) there were musical stars performing live as well as competitions and on-air phone calls to viewers. The team wanted to end the show at its peak, with the last 6 months with Will MacDonald as Producer. Who was associated with Ginger Chris Evans on many of his TV projects. The last musical act were The Cure who let Ray play with them on their final song. Other guests that night included Bjork & Bono from U2.

After a couple months break, MTV decided to throw money on a big once a week spectacular called X Ray Vision. Although it never felt that it had the same feel and buzz as Most Wanted. Instead of coming from the studio, it utilised the 1st floor of MTV building at Camden Lock. After several weeks the show went on location to Hamburg. It was billed to feature punk band Die Toten Hosen playing live. However there was a local journalist who wrote that the band would be there in person, instead of on video screen. A large number of their fans turned up expecting to see them, venting their anger by throwing glass bottles and beer at a confused Cokes and camera crew (They were unaware of what had been written in the press). For the safety of his crew, Ray decided to end the show early. MTV used Ray as a scapegoat and a week later the show went out for a final time. Bringing Ray's time at MTV to an end, after nine years.

Not long after, MTV Europe broke up into localised versions, and in 1994, Cokes released a single titled "Simply Sexy!" [2] under the name Ray Cokes & the Sex Gods featuring Al Agami, the song's title referring to one of the catchphrases frequently used in Most Wanted.

While working with Will MacDonald on MTV's Most Wanted he met Chris Evans, who brought him to the original Virgin 1215 in the UK. The show went out weekday evenings in a similar time slot to his old TV show.

Cokes also worked as the compère for the White Concert, a live concert recorded in Horsens, Denmark, in November 2008 due to the 40-year jubilee of the Beatles' eponymous White Album .

In late 2008 he moved to Berlin and in 2009 to Antwerp, Belgium, declaring that he would like to settle there permanently. [4]

During the summer of 2009, Cokes and Jean Blaute co-hosted Tournée Générale, a 10-part exploration of Belgian beer around the world from Sputnik Media, on Flemish channel Canvas. [5] A second 10-part series was aired in 2011 and a third in 2013 on the Belgian channel Eén.

In September 2011, Cokes hosted the Sunday afternoon show Cokes calling on Classic 21, one of the radio stations of the Belgian RTBF. [6]

In February 2014, he hosted the Swedish Grammy awards.

In October 2014, he released his autobiography, My Most Wanted Life - On-Screen, Off-Screen and In-Between, available in German and English editions.

Ray Cokes has been put into Minecraft as a splash text reading: "Bring me Ray Cokes" because Notch, the developer of Minecraft, used to watch Ray Cokes when he was a kid.

During the COVID-19 pandemic, Ray whilst living in Spain has been hosting a Instagram live show several nights a week.

MTV is an American cable channel that launched on August 1, 1981. Based in New York City, it serves as the flagship property of the ViacomCBS Domestic Media Networks division of ViacomCBS. Prior to launch, the network was first tested on December 1, 1977, as Sight on Sound.

MTV2 is an American multinatonal pay television channel owned by the ViacomCBS Domestic Media Networks division of ViacomCBS. The channel was initially broadcast free-to-air in selected markets, where the former all-request music channel known as The Box was broadcast.

MTV is a pan-European pay television network launched on 1 August 1987. Initially, the channel served all regions within Europe being one of the very few channels that targeted the entire European continent. Today, the channel only serves a selection of European countries as ViacomCBS Networks EMEAA began to regionalise its network in 1997.

The Junior Eurovision Song Contest 2006 was the fourth edition of the annual Junior Eurovision Song Contest for young singers aged 8 to 15. On 2 December 2006, the contest was broadcast live from Bucharest, Romania making it the second time the contest had been held in a capital city. It was organised by the Romanian national broadcaster, Romanian Television (TVR), in co-operation with the European Broadcasting Union (EBU).

Music Box was a pioneering pan-European 24-hour cable and satellite channel that ran from 29 March 1984 to 30 January 1987, and was operated by Music Box Ltd. It was originally one of three channels along with Prem1ere and The Children's Channel, that formed Thorn EMI's venture into satellite television, as a British version of music channel MTV. Music Box later became part of Virgin Vision, one of Richard Branson's business ventures launched in 1983.

Proximus TV, subsidiary of the Belgacom Group, provides Digital TV (IPTV) services over its own IPTV Platform in Belgium. It was launched in the summer of 2005.

Nickelodeon is a Flemish television channel that is derived from the Dutch Nickelodeon. The channel started in the summer of 2009 when it got its own programming. Via the satellite, the Dutch version is stil being broadcast.

MTV’s Most Wanted was a television series by MTV Europe, from the middle of the 1990s, which was broadcast from London, England, being presented by Ray Cokes. It ran from April 1992 until December 1995. The series was broadcast live from MTV Studios in Camden, across the television network of MTV Europe, and featured blends of viewer interaction, competitions, live music performances, and music videos. 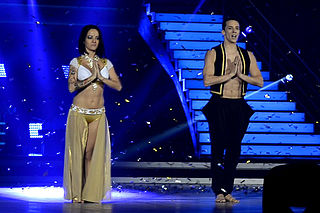