Matthew James Rudd (born 24 May 1973 in Beverley, East Riding of Yorkshire) is an English Radio Personality and disc jockey. Since May 2013 he has presented the weekly Forgotten 80s radio show on Absolute 80s. [1]

Rudd was brought up and educated in Hedon, East Riding of Yorkshire, and started his working life as a journalist, working for a news agency. He began his radio career as an amateur on the local hospital radio station in Hull, Kingstown Radio. He also supplemented this experience by working on other local amateur stations.

Rudd joined Hallam FM in Sheffield in 1996, and thus became a radio professional. A year later he joined Viking FM, working on through the nights and presenting the station's football show. In 2001, Rudd moved to Imagine FM in Stockport and presented the evening show before moving to the breakfast show. Rudd also produced and presented the station's coverage of Stockport County during his time at Imagine. [2] Whilst based in Stockport, Rudd started work hosting a weekly 80s night at Cobdens nightclub, which continued for eight years.

Rudd returned to Hull in 2007 and joined new independent station KCFM, the station having been granted an OFCOM broadcast licence in 2006 after a trial period. [3]

When the station started broadcasting in August 2007, Rudd presented the night show during the week, the Sunday breakfast show, the 70s show on Tuesday nights and Sportscall, [4] a show dedicated to providing an on-air forum to supporters of Hull City, Hull F.C. and Hull Kingston Rovers with each club having a weekly fans panel. He also interviewed both current and former players and staff from all clubs, including co-hosting the show with Hull City chairman Paul Duffen on Thursdays.

He later scaled down his duties in order to concentrate on SportsCall, before departing the station in November 2008 to return to freelancing.

On 12 November 2009 it was announced he would return to Huddersfield's Pennine FM after a stint previously on the station during its Home 107.9 branding. Rudd launched their brand new Breakfast Show on 4 January 2010. However, the station closed down in April 2010. [5]

Rudd presented a weekly 1980s music show for digital and satellite station Q Radio from September 2010 until the station was discontinued in May 2013.

In May 2013 Rudd moved to digital radio station Absolute 80s to present the weekly Forgotten 80s show which airs each Sunday evening at 9 pm.

Rudd is a supporter of Hull City. He is a contributor to club fanzine Amber Nectar, and also acts as editor-at-large for the site, while also hosting and producing its weekly podcasts. He has also written several articles on the club for football magazine When Saturday Comes and has been a correspondent on club affairs for talkSPORT.

He is also a long-time contributor to the TV Cream website and its associated mailouts.

Rudd's elder brother is swimming coach Jon Rudd and Rudd himself also works as a swimming teacher. In 2015 he was given the award of Teacher of the Year by the Swimming Teachers Association.

Pulse 1 is a British Independent Local Radio station that serves the Bradford, Kirklees and Calderdale areas of West Yorkshire, owned by Bauer Radio. The station was originally known as Pennine Radio and The Pulse.

Pulse 2 is a British radio station owned by Bauer Radio. It is the AM sister station of Pulse 1.

Hallam FM is an independent local radio station serving South Yorkshire from studios in Sheffield. The station is owned and operated by Bauer Radio and forms part of the Hits Radio network.

Kerrang! Radio is a specialist digital rock music radio station currently broadcasting to the United Kingdom on Freeview and various online platforms. It is owned and operated by Bauer Radio and forms part of Bauer's National portfolio of radio brands. The station was previously available on DAB radio, though latterly in London only, and was available on FM in the West Midlands from 2004 to 2013.

Classic Gold was a network of three "Gold" music formatted stations which broadcast on AM in Bradford, Hull and Sheffield. They were the Pennine Radio, Viking Radio and Radio Hallam's medium wave franchises. These stations were part of the Yorkshire Radio Network.

Absolute 80s is a digital radio station in the United Kingdom catering for "reluctant adults" who want to reconnect with the tunes of their 1980s youth.

Ian Roberts is a British DJ. He presented weekday breakfast on the former Magic Radio in North West England.

The Yorkshire Radio Network was a group of three radio stations which shared programmes in the evening and at weekends. YRN was made-up of Pennine Radio in Bradford, Viking Radio in Hull and Radio Hallam in Sheffield. 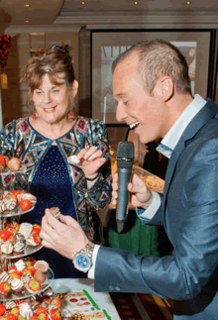 Signal 1 is a British Independent Local Radio station serving Staffordshire and South Cheshire. The station is owned and operated by Bauer Radio, and broadcasts from studios in the Shelton area of Stoke-on-Trent alongside its sister station Signal 2.