Derek McCulloch (born 1964) is a writer, known for graphic novels such as Stagger Lee, Gone to Amerikay, Pug, and Displaced Persons. He was born in Ottawa, Ontario, raised in Grande Prairie, Alberta, [1] and lives in Oakland, California.

Throughout the mid-1980s and early 1990s, he was the publisher of Strawberry Jam Comics, and wrote To Be Announced and night life. He was also co-founder of The Comic Legends Legal Defense Fund in Canada and co-edited the organization's two True North anthologies. His stories have appeared in comics series including Open Season , Shred!, and Cerebus High Society. [2] He works as a technical editor at an engineering company. [3]

He wrote Stagger Lee, a graphic novel based on the story of Stagger Lee and drawn by Shepherd Hendrix, which was published by Image Comics in May 2006. [4] It has been nominated for several awards, including the Eisner Awards 2007 [5] and the Eagle Awards 2006, [6] and won several Glyph Comics Awards in 2007, [7] including Story of the Year and Best Writer.

McCulloch wrote Gone to Amerikay, an original graphic novel drawn by Colleen Doran and released in 2012 to numerous positive notices from The Wall Street Journal , Boing Boing , Irish Echo , The Miami Herald , Irish Central, and The Sunday Times , Dublin edition. [8] An excerpt from the book was included in the anthology The Best American Comics 2013 under the title "The Story of Gráinne Ní Mháille."

In 2009, he released his first book for children, T. Runt!, illustrated by Jimmie Robinson.

In 2010, he self-published a print on demand anthology of short stories, Stories of a Callow Youth. [9]

Pug, his 2010 graphic novel with artist Greg Espinoza, was nominated for the 2011 Spinetingler Award, in the category of Best Crime Comic/Graphic Novel. [10]

In December 2011, The Repertory Theatre of St. Louis announced that its 2012 new theatre series, Ignite! would feature a reading of a stage musical adaptation of Stagger Lee with a book by McCulloch and music and lyrics by Stew and Heidi Rodewald. [11] When the reading took place on March 15, 2012, it was with not just book but also lyrics by McCulloch. It was directed by Amanda Dehnert and had a cast including Ken Page, Rebecca Naomi Jones, and Javier Munoz. [12] [13]

In August 2014, Image Comics published Displaced Persons, [14] an original graphic novel by McCulloch and Anthony Peruzzo, described as a "tale of murder, love, crime, friendship, betrayal, and just the slightest bit of time travel," taking place in San Francisco in the years 1939, 1969, and 1999. Displaced Persons was previously announced (and solicited) in 2008 as a project for McCulloch and Rantz Hoseley. [15] but Hoseley was not connected with the final version of the book.

In February 2016, 59E59 Theaters, an off-Broadway theater announced a stage musical adaptation of Damon Runyon's Madame La Gimp , [16] with a book by McCulloch and Giles Havergal, lyrics by McCulloch, music by Kyle Athayde, and arrangements and orchestrations by Peter and Will Anderson. The production was scheduled for October 2016, and was to be directed by Amanda Dehnert.

In December 2018, the first of several collaborations with musician Richard Stuverud appeared, when Green Monkey Records included their song "Empty Branches" (lyrics by McCulloch, music written and performed by Stuverud) on their 2018 Christmas compilation, "A Green Monkey Christmas for Martians Up on Mars." [17] The following year, two different versions of their song "Snowing in Frisco" appeared on Green Monkey's "Hail the Jolly Christmas Monkey!" [18]

In May 2020, Stuverud released his first solo album, "Memories in Kodachrome," with 10 of its 11 songs featuring lyrics by McCulloch. [19] 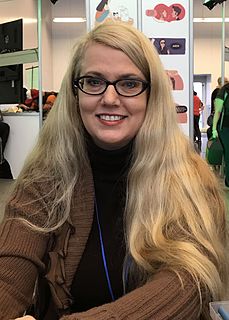 Colleen Doran is an American writer-artist and cartoonist. She illustrated hundreds of comics, graphic novels, books and magazines, including the autobiographical graphic novel of Marvel Comics editor and writer Stan Lee entitled Amazing Fantastic Incredible Stan Lee, which became a New York Times bestseller. She adapted and did the art for the short story "Troll Bridge" by Neil Gaiman, which also became a "New York Times" bestseller. Her books have received Eisner, Harvey, Bram Stoker, and International Horror Guild Awards. 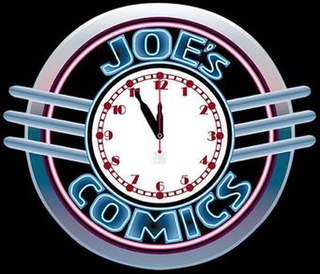 Joe's Comics is an American comic book imprint of Image Comics run by J. Michael Straczynski's Studio JMS and was originally published as an imprint of Top Cow Productions. As of 2014, key titles in the current line include Dream Police, The Book of Lost Souls, Ten Grand, Protectors Inc, and Sidekick. 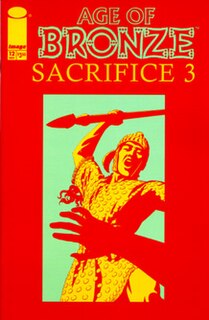 Age of Bronze is an American comics series by writer/artist Eric Shanower retelling the legend of the Trojan War. It began in 1998 and is published by Image Comics.

Richard Starkings is a British font designer and comic book letterer, editor and writer. He was one of the early pioneers of computer-based comic-book lettering, and is one of the most prolific creators in that industry. 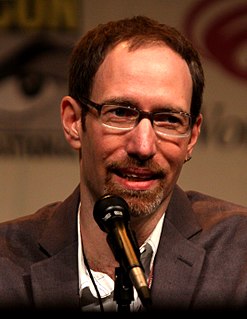 Joseph Kelly is an American comic book writer, penciler and editor who has written such titles as Deadpool, Uncanny X-Men, Action Comics, and JLA. As part of the comics creator group Man of Action Studios, Kelly is one of the creators of the animated series Ben 10.

A Distant Soil is an epic space opera comic book series published by American company Image Comics, combining science fiction and fantasy with Arthurian themes. It is written and illustrated by Colleen Doran. 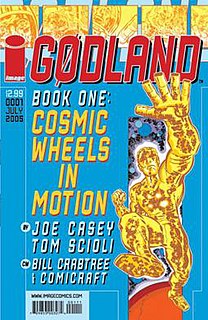 Gødland is an American comic book series by Joe Casey and Tom Scioli, published by Image Comics from 2005 to 2012.

Rick Remender is an American writer, showrunner, and producer who resides in Los Angeles, California. In comics he is best known for his work on Image Comics such as Deadly Class, Black Science, LOW as well as Marvel Comics' Uncanny X-Force, Captain America, and Uncanny Avengers. In video games he wrote on EA's Dead Space and Epic's Bulletstorm. In film and television he was a showrunner/lead writer on Sony television's adaption of his book Deadly Class.

Jonathan Luna and Joshua Luna, professionally known as the Luna Brothers, are Filipino-American comics creators known for their creator-owned books. They first achieved significant success with the series Ultra and Girls. They are also known for their book The Sword, and for providing the art for Marvel Comics' Spider-Woman: Origin.

Jamie McKelvie is a cartoonist and illustrator, known for his both work on books such as Phonogram, Young Avengers and The Wicked + The Divine, and his approach to comic character design. 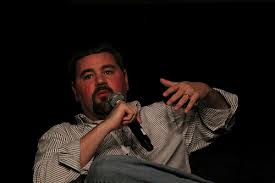 Jonathan Hickman is an American comic book writer and artist. He is known for creating the Image Comics series The Nightly News, The Manhattan Projects and East of West, as well as working on Marvel Comics' Fantastic Four, FF, and S.H.I.E.L.D. titles. In 2012, Hickman ended his run on the Fantastic Four titles to write The Avengers and The New Avengers, as part the "Marvel NOW!" relaunch. In 2013, Hickman wrote a six-part miniseries, Infinity, plus Avengers tie-ins for Marvel Comics. In 2015, he wrote the crossover event Secret Wars.

The Glyph Comics Awards recognize the best in comics made by, for, and about people of color from the preceding calendar year. While it is not exclusive to black creators, it does strive to honor those who have made the greatest contributions to the comics medium in terms of both critical and commercial impact. By doing so, the goal is to encourage more diverse and high quality work across the board and to inspire new creators to add their voices to the field.

Rob G is an American comics artist who has done work for DC Comics, Image Comics, and AiT/Planet Lar, and is best known for Teenagers from Mars and The Couriers. 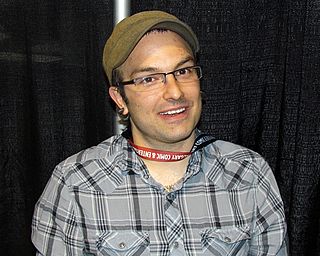 Riley Rossmo is a Canadian comic book artist and illustrator, known for his work on various Image Comics titles, as well as Marvel Comics' Daken: Dark Wolverine. Rossmo is an instructor at the Alberta College of Art and Design.